Back of the Bus: Real People, Real Stories 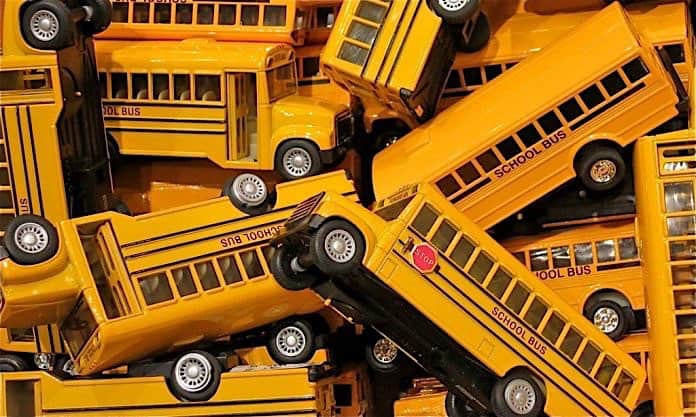 Look back on the last four years of ‘Back of the Bus’ and you will meet a warm, sometimes weird, but always wonderful collection of people, places and pieces of an industry we are all connected to in our own unique way. Whether it be some interesting insight from Glen “Clothman” Moyer or a story that one of us at STN found worthy of our home-baked little column, we have always tried to end the issue with something to talk about at the next watercooler roundtable or at least give you a something to keep you warm during those 5 a.m. start times.

While flipping to the back of the last four years worth of issues, I found too many favorites to mention. There was Betty Nicosan, the baking bus driver who was the subject of our first installment of ‘Back’ in Nov. 2004. Known to her students as “Mrs. Pillsbury,” Nicosan competed in the 42nd Annual Pillsbury Bake-Off with her world-famous (locally, anyway) Giant Cinnamon Cheese Danish. She learned of her invitation to the national contest one morning while she was boarding her students.

Then there are the numerous “old timers” who have been profiled on the final page in many months. Ruben Sprecht and Frank Slezewski, a pair of drivers for Pulaski, Wisc., Community Schools, had a combined 106 years of school bus driving experience when Slezewski retired in August 2005. Or maybe you remember Judy Wagoner and her perfect driving record. Wagoner’s 33-year career as a bus driver for La Grande School District 1, which logged 1.4 million miles when she dropped off her last student in January 2006, never had as much as a smudge on it, let alone a moving violation. Or what about the new blood the industry is always in search of? Peter Wlosinski knew he wanted to be a bus driver ever since he was in first grade. Fast forward a decade and Wlosinski not only drives school buses for Voyager Bus Company in Duluth, Minn., he won the Rookie of the Year Award after only six months behind the wheel.

Some of our drivers have even experienced their 15 minutes of fame on a national stage. After learning that a school bus driver was chosen as a contestant on the 14th season of Survivor, I knew this would be the perfect piece of my first contribution for ‘Back of the Bus.’ After going through some of CBS’ legal loopholes, I was able to talk to the family of Gary Stritesky, a 55-year-old bus driver from Ramsey, Minn. Unfortunately, Stritesky wasn’t that season’s winner, as he was taken off the island after suffering an injury from a fall during one of the show’s challenges and an allergic reaction due to an onslaught of fire ants. We talked after he was back home and he could only say good things about his experience — minus the ants, of course.

There was also sometimes an overpoweringly emotional side to the monthly department. There was the “Got Art?” bus — a way for the parents of Sarah Malawista to heal after their daughter took her own life after battling with a bipolar disorder. A retired Howard County, Md., school bus was transformed into a museum on wheels that promoted funding for school art programs and informed others on bipolar disorders. Or you might remember C.J.’s Bus, a mobile unit used to comfort children who have been affected by natural disasters. The bus was named after C.J. Martin, who, along with his grandmother and great-grandmother, died when a 200-mph tornado destroyed their mobile home community in southwestern Indiana in 2005. One of the most painful loses was Prabesh Sapkota, a three-year boy suffering from leukemia who’s “wish” was granted when he was able to ride the bus to school and spend time in a kindergarten class at Dundee Elementary School in Omaha, Neb. Prabesh passed away in March 2008, just weeks after his first and only bus ride to school.

For now, we are re-evaluating Back’s place in pages of STN. If you have a strong feeling either way, send me an e-mail at stephane@stnonline.com. Wherever this department’s future lies, it has been a great ride and fun to take a look at the industry from the Back of the Bus.

Reprinted from the November 2008 issue of School Transportation News magazine. All rights reserved.