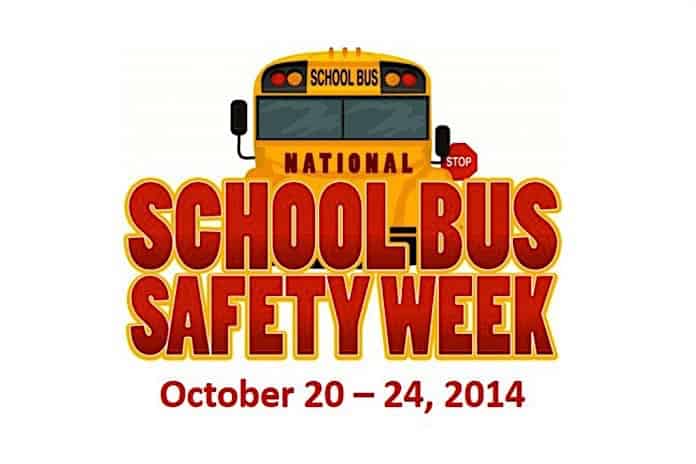 The theme “At my stop, you stop” is being echoed across North America this week as National School Bus Safety Week kicked off on Monday.

School bus contractor First Student is warning motorists to obey the school bus stop arm and flashing red lights at bus stops around North America as students load and unload. The company said national statistics show that bus stops are the most likely place where students are injured during the school commute.

“When motorists illegally pass a school bus, it puts children at risk and may cost lives,” said Gary Catapano, First Student’s senior vice president of safety. “Motorists need to educate themselves on stop arm laws because everyone in the community plays an important role in ensuring students get to and from school safely.”

First Student pointed out that in most states and municipalities, motorists traveling the same direction as the school bus must stop until the stop arm is retracted and the bus begins moving. Motorists traveling in the opposite direction must also stop unless they are traveling on a four-lane road that includes a median.

American Traffic Solutions, which installs video cameras on stop arms to record motorists who illegally pass buses and processes tickets for law enforcement, said awareness is making a difference. In Cobb County, Georgia near Atlanta, for example, ATS said violations issued for illegal passing dropped 41 percent in April from a year ago, to 767 citations from the previous 1,300. The company also said that fewer than 1 percent of drivers who received one ticket as a result of being captured on video went on to receive a second.

Meanwhile, National Express Corporation, which operates Durham School Services and Petermann in the U.S. and Stock Transportation in Canada, said it is also partnering with local law enforcement agencies to target motorists who violate laws that prohibit illegal passing of stopped school buses. The company said bus drivers are writing down license plate numbers of offenders and notifying police of specific bus stops that are especially problem areas.

“Our primary goal is to provide the safest transportation possible for our students, and we don’t take that responsibility lightly,” said Michele McDermott, senior vice president of safety at National Express. “National School Bus Safety Week is just one more way we can encourage everyone to use extra caution around school buses.”

She added that a main company objective is to educate students and the public. In addition to warning motorists about school bus stop laws, National Express advises student bus riders to remain out of the so-called “Danger Zone” around the bus’ perimeter by taking 10 giant steps away from the vehicle when loading and unloading. The company also recommends students only cross the street in front of the school bus and the crossing gate that extends from the front of the vehicle at a 90-degree angle to remain in the bus driver’s sight.

National Express also said students should not be texting, talking on cell phones, listening to headphones or using earbuds while at the bus stop.