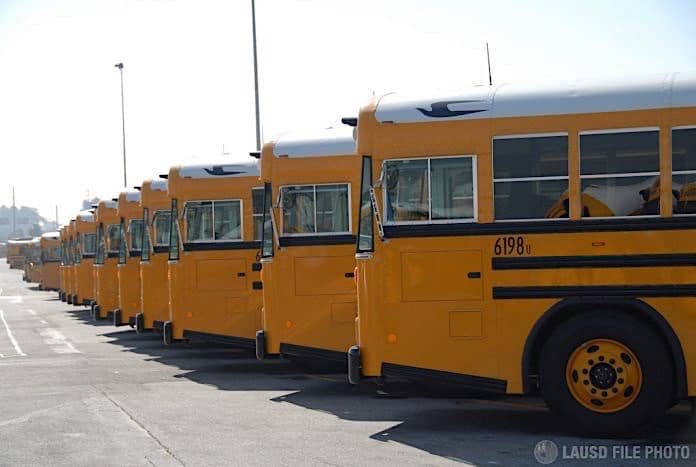 The Los Angeles Unified School District has voted to apply for a share of $25 million available from the California Energy Commission for electric school buses and related infrastructure.

The vote was taken during a district Board of Education meeting on Tuesday. On the agenda was an action item to discuss the application for CEC funding offered through the School Bus Replacement Program.

It was noted that the Office of the Chief Financial Officer “(recommends) approval for District staff to apply for the California Energy Commission School Bus Replacement Grant to replace diesel buses with electric buses and fund the associated electric vehicle infrastructure costs.”

The LA County Electric Bus Coalition reported that LAUSD was looking to replace 10 diesel buses, the maximum amount that each district can apply for. The Coalition has been vocal in encouraging the district to adopt electric buses as a measure to improve air quality, and thereby student health.

“LAUSD has always been driven by an effort to ensure safe transportation for its students, and has incorporated an aggressive alternative fuel program to this effort,” Dr. Thelma Melendez, chief executive officer of the Office of Educational Services, said at the time.

Jobs to Move America is a member of the Coalition. Its California organizer, Hector Huezo, noted, “As the best and cleanest transportation on the road, electric school buses are the only way to free our students from breathing dangerous fossil fuel fumes every day, with lasting improvements in student health and academic performance.”

“We applaud the LAUSD Board for seizing this valuable opportunity to bring 100 percent clean all-electric school buses to our students and neighborhoods,” Huezo said on Tuesday in praise of the vote. “With millions of dollars of government funding on the table, LAUSD has a rare chance to replace outdated polluting diesel buses with electric buses, without diverting resources away from the classroom.”

The CEC funding is available for electric school buses, or CNG school buses if it is proven that electric ones “would not be sufficient” for the district. Money is also allotted for charging or fueling infrastructure.

Applications are accepted through Sept. 20.

Today members of the @LAElectricBus including @katyaenglish spoke to @LASchools Board on the importance of transitioning to 100% clean electric school buses! The board unanimously approved the Transportation’s Dept request to apply for state funds towards E-School buses! ⚡️🔋🚌 pic.twitter.com/pZoHRghnZN