Looking at the Future 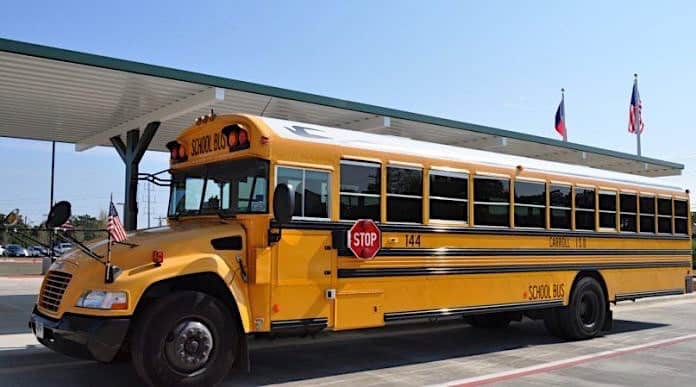 Apprentice programs form the next generation in pupil transportation.

In the Denver suburb of Thorton, Co., Dave Anderson, transportation director of Adams Five Star Schools, knows exactly where one of the tomorrow’s leaders in pupil transportation is: in his garage learning from his senior mechanics.

At 18 years-old, Tyler Huston is already on a path to a career in pupil transportation. From 7:30 a.m. until 12:30 p.m., Tyler hits the books at nearby community college. Then, until 6 p.m., and all day on Friday, Tyler works under the hood with some of Anderson’s best mechanics.

In the program at Adams and one like it across town at Cherry Creek Schools, hand-picked students combine two years of classroom learning with four years, or 8,000 hours, of on-the-job training. All the while, students are paid, starting out earning a fraction of an entry-level mechanics’ salary and working their way up as they learn more.

When Tyler earns his apprentice program certificate, he’ll be earning around $14.85, 90 percent of what an entry level mechanics makes, and as Anderson reminds his apprentices if they ever slough off, probably a lot better than some of their friends.

After he gets his Department of Labor certificate, Tyler will be eligible for hire at almost any dealership. But Tyler said he’s focused on a career of pupil transport and plans to get his CDL and an ASE School Bus Mechanics certification next.

“It’s an awesome program,” he added.

Six years ago, when he was director of transportation at Cherry Creek, Anderson worked with the Colorado branch of the U.S. Department of Labor to approve the curriculum and become an official apprenticeship site. For Anderson, the program is exciting not just because it’s his baby or because it brings in more great mechanics, but because, just like Tyler, he started out as an apprentice before working his way up to transportation director.

“I always tell the kids, your potential is as high as you want to make it. If I can do it, you can do it,” Anderson said.

Across town, Anderson’s longtime friend and director of transportation at Cherry Creek Schools shares a similar experience. Like Anderson, he started out as an apprentice, pumping gas for $4.28 an hour. Over a 20-year career, Steve Wright has worked his way up, including taking over the apprentice program Anderson started when he rose to transportation director.

Wright has built drag cars, custom motorcycles, boats, “anything with an engine” as he says. But what he’s really passionate about is the fact that every day his work keeps kids safe.

“I take real pride in this. This is the passion of my life,” Wright said. “I can teach pretty much anybody to be a good mechanic. But I can’t instill in them the work ethics or the passion.”

By having apprentices work for four years before bringing them on as full employees, Wright knows guys like Ian and Shawn, two of his newest additions, have the passion and the work ethic to make it.

A thousand miles away, Navistar, the parent company of IC Corp., has been teaching what might become the next generation of technicians for nearly a decade. At the Chicago Vocational Academy and at Indianapolis Public Schools’ Tech High, dozens of students spend three years in a National Automotive Technicians Education Foundation–approved diesel engine course. Like Anderson and Wrights’ apprentice programs, the Navistar program pairs academics, hands-on training with retired Navistar professionals and an opportunity for paid work. At the end of the three-year program, graduates get a starter tool kit and are ready and capable of earning as much as $45,000 per year as journeyman mechanics.

Navistar has contributed millions in running the programs. It has renovated the jobs sites, donated Navistar vehicles, including an IC bus, even given starter tool kits to each graduate. For Navistar spokesman Tim Touhy, working with the program is about more than fulfilling a need for mechanics to service the vehicles Navistar builds. It’s about creating careers.“You’re setting somebody on a course for their life,” Touhy said. “They’re getting real jobs that pay really good money.”

Alex Robinson, transportation director at San Diego Unified School District, said launching a pilot mechanic’s apprentice program is about showing students that might not graduate all the options they have.

“A lot of these students don’t see an end in sight,” Robinson said. “But if they see they could get paid to detail buses or be trusted with working on a police squad car, it really brings home all the things they can do.”

This spring, an inaugural class of six Clairemont High School students in San Diego will spend three days a week shadowing mechanics and getting lessons in workplace basics. Many are at risk of not graduating or have learning disabilities.

As school-to-career coordinator, Desiree Romero regularly hears from local businesses. Many are worried about the workforce of skilled baby boomers that are about to retire.

“It’s something we all need to take a really good look at and start coming up with strategies to get more young people excited about careers and get them training,” Romero said.

For young mechanics like Tyler Huston, those in Robinson’s first class or Navistar’s long-standing programs, right now its mostly about loving working with buses. But, who knows, in another 24 years, they might just be the ones heading transportation departments and inspiring the next generation of school bus professionals.

Reprinted from the March 2008 issue of School Transportation News magazine. All rights reserved.