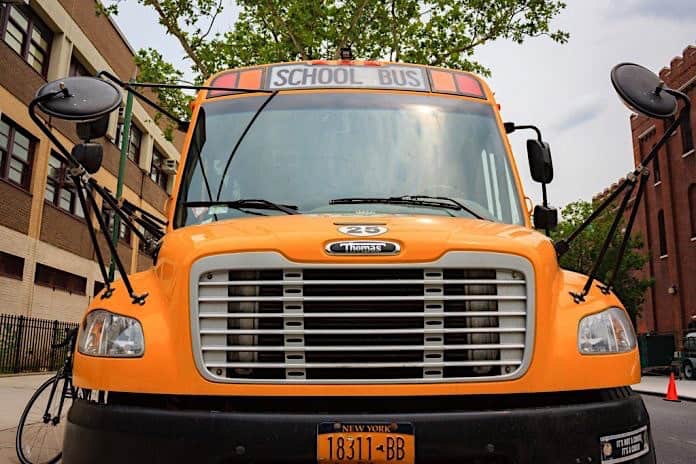 The New York Association for Pupil Transportation welcomed the inclusion of increased state transportation aid in the 2018-19 budget, but expressed disappointment that school bus stop arm cameras were not included.

NYAPT and other local student transportation professionals have long called on legislators to allow school districts to implement the surveillance systems that record motorists that illegally pass school buses that are engaged in loading and unloading students—with flashing red lights and the federally-mandated stop arm deployed.

“The cameras would greatly aid in the identification and ticketing of motorists who illegally pass stopped school buses,” NYAPT said in a statement released Saturday, a day after the budget was approved and announced by Gov. Andrew Cuomo. “We believe this is critical legislation to enable New York to decrease the incidence of such illegal passing from the current dangerously high levels of 50,000 such passes each day. School bus drivers across the state witness this dangerous practice every day, even several times a day. They know the danger that it presents for our children.”

NYAPT sponsors a monthly, statewide count performed by school bus drivers that tracks the number of illegal passing incidents. The state also contributes to an annual nationwide illegal passing count sponsored by the National Association of State Directors of Pupil Transportation Services, which estimates there are a total of 14 million violations a day nationwide. The NASDPTS 2018 survey period began on March 1 and continues through May, with updated results expected this summer, just in time for the STN EXPO.

Meanwhile, NYAPT said it will continue to promote the passage of legislation that would allow school districts to install stop arm surveillance systems; and enter into inter-local government agreements for using recordings to prosecute motorists that violate Section 1174 of the state’s vehicle and traffic law.

The state legislature also did not add language to the budget that increases fines on illegal passers, but NYAPT said that it is hopeful lawmakers will still act before the current session adjourns in June.

But all was not lost. The state budget increases foundation aide to $26.7 billion, an increase of nearly $1 billion, which NYAPT said is “a strong statement in support of our schools.” The foundation aid amount is based in part on state‐specified expenditures per pupil and expected minimum local contribution per pupil in each district.

Specific to transportation, the approved budget provides for full reimbursement of $1.909 billion. It also ensured that expense-based aids, including transportation, will continue to be reimbursed according to current formulas and aid ratios. NYAPT pointed out that transportation aide will not be subject to arbitrary caps in the growth of those aid categories.