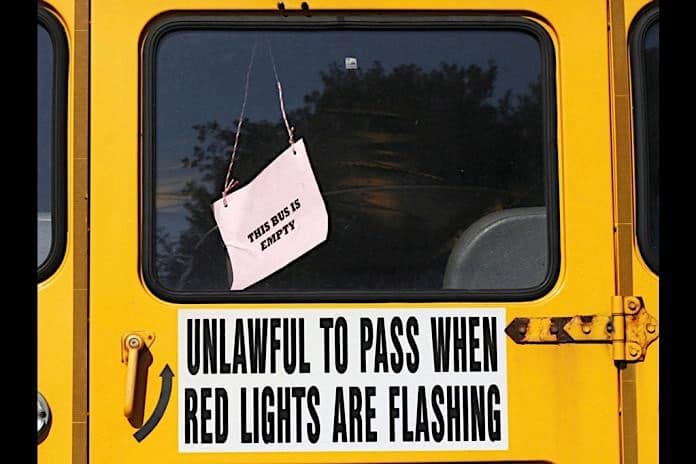 Last week there were no reported student fatalities around school buses or bus stops during National School Bus Safety Week, which is welcome news after recent tragedies in Arkansas and Florida. To raise awareness of unsafe driving around school buses and bus stops, the New York Association for Pupil Transportation conducted a one-day survey of illegal bus passing on Oct. 21.

The results tallied by 1,080 bus drivers from 18 school districts statewide showed a total of 385 instances of motorists failing to brake for school buses that are stopped to pick up or discharge students. NYAPT officials emphasized that these violators are placing New York students in danger of injury, or even death, every day.

The association estimated that motorists pass school buses about 50,000 times each day, which is supported by research and surveys such as NASDPTS’ Annual Stop-Arm Violation Count. In addition, school bus drivers are reporting an increasing number of motorists passing stopped school bus on the right side — the side on which schoolchildren board and disembark from the bus.

Every spring NYAPT also conducts a one-day Operation Safe Stop enforcement campaign, which yields up to 1,300 tickets, on average, to motorists who break that law.

“We are deeply concerned that a passing motorist will strike and kill a student or injure a student. We are intent on calling the public’s attention to this highway safety risk and to get parents and educators engaged in reducing illegal passing,” said NYAPT President David Adam of the Marcus-Whitman Central School District in Rushville.

Adam went on to thank the 1,000-plus NYAPT members across the state, from districts large and small, urban and rural, for taking part in the survey and getting “the message out about illegal passing of school buses” during School Bus Safety Week.

Thomas Weeks, who is chairman of Operation Safe Stop as well as area safety and compliance manager for STA/Ridge Road Express in Gasport, added, “We felt it was important to share the results of that survey, and we will report this data once a month for the rest of the 2014-2015 school year.”

“It’s extremely dangerous to pass a stopped school bus,” Miller said. “You never know when a kid will dart out in front of a bus.”

The New York School Bus Contractors Association (NYSBCA) took the opportunity to promote a new bill by New York State Sen. John Bonacic that would increase penalties for motorists who illegally pass stopped school buses. Under the current law, first-time offenders may face up to 30 days in jail, five points on their driver’s license and/or a $400 fine. Sen. Bonacic’s proposal would increase these penalties to a 60-day driver’s license suspension for two or more convictions in a 10-year period. The bill remains in the New York State Assembly Transportation Committee.