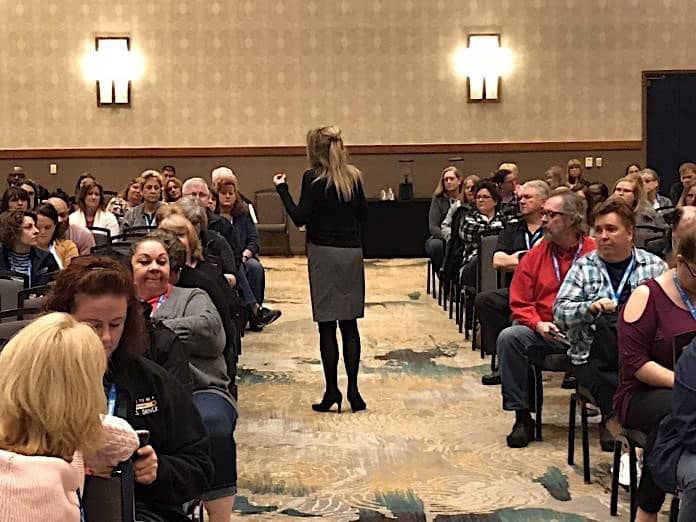 Student misbehavior on the school bus, especially in students with disabilities, indicates internal pain as a result of a variety of issues. That was a main theme of Lori Desautels’ talks with student transporters at the recent TSD Conference in Frisco, Texas.

The assistant professor at Butler University in Indianapolis and special education teacher for elementary children, presented at a general session on March 13 which she expanded on later that day during a breakout session. She said these students are unable to regulate these behaviors, based on the effect that past traumas, which researchers have coined Adverse Childhood Experiences or ACEs, have on the developing brain.

Combine four or more ACEs with a lack of sleep and nutrition, and a troubled student you make.

“Children in pain look oppositional or apathetic,” she said. “A lot of our students are so angry. How can you be so angry when you are so young?”

What these students are really doing by acting out, Desautels explained, is communicating with school bus drivers, attendants and teachers.

She also provided an overview of brain science to help attendees understand how these early childhood traumas and the resulting stress affects students. The brain develops from the stem, where the body’s life-sustaining regulation occurs, to the prefrontal cortex, where thoughts and senses are processed.

The hippocampus is supposed to turn stress off, Desautels added, but the over-secretion of cortisol damages this function.

“Stress is good for us. It makes us alert,” she said. “But toxic stress is bad. When we are stressed, the amygdala shuts down the prefrontal cortex.

“We have kids getting on the bus who literally have half a brain.”

Student transporters, as well as teachers, need to understand what’s happening in children’s brains, in order to help calm these emotions and prepare the children to learn. In turn, they can teach the students about their own brain chemistry, which can provide a sense of relief with the knowledge that there is a scientific explanation behind how they feel and why they act out.

Desautels also provided several strategies for school bus drivers and attendants to calm students. They included creating hand signals that are personal to each student; establishing “worry buckets” on the bus where students can drop off notes explaining frustrations and challenges; and incorporating a word or phrase of the day for students to focus on. She also demonstrated several rhythmic body movements and breathing exercises that student transporters can teach students to help “dampen down” emotional responses and stresses. Desautels said students can also be encouraged to lead the exercises.

“We can’t fix a kid. That’s not what we’re called on to do,” she added during an afternoon breakout session that focused on empowering school bus drivers to engage with students. “Kids need to know about their brains and how to self-regulate. Emotions are contagious.”

One of the best ways to engage students that can prevent discipline issues is by simply giving them a safe zone where they can feel hear and understood, she concluded.