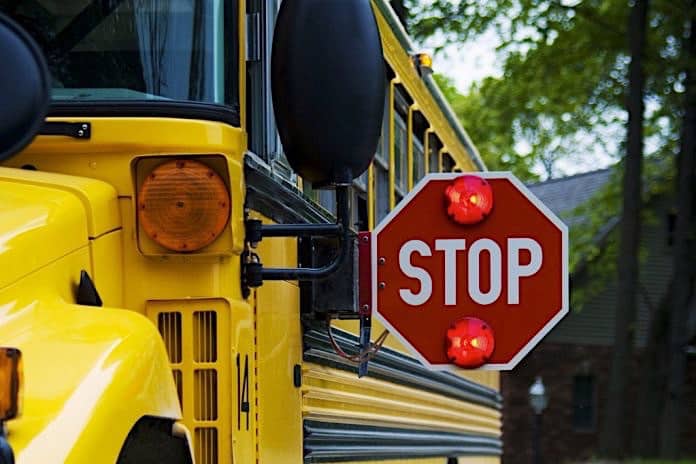 The unintended consequence of a new Georgia law enacted over the summer essentially makes it no longer illegal to pass a stopped school bus that is loading or unloading students, according to legal experts and student transporters.

While there is widespread support of repealing the law, the process could take the next six months, which the Georgia Association for Pupil Transportation said places all student school bus riders into harm’s way.

Perplexing language added at the 11th hour to legislation that was primarily designed to revise video enforcement of speeding in school zones is the culprit. At issue is the following sentence: “The driver of a vehicle upon a highway with separate roadways or a divided highway, including but not limited to, a highway divided by a turn lane, need not stop upon meeting or passing a school bus which is on a different roadway or on another half of a divided highway.”

Previously, as is still the case in other states, motorists did not stop for a school bus loading or unloading if they were traveling in the opposite direction on a divided highway or road that is separated by a grass area or physical barrier, such as a concrete median. But the new law redefined the term, divided highway, to exempt motorists from stopping when a middle turn lane is present.

Gov. Nathan Deal signed the House Bill 978 into law in May and it went into effect on July 1.

The Georgia Association for Pupil Transportation said the exemption is applicable to nearly any road or highway statewide that does not include a grass or concrete median. Chad McCaskill, GAPT president and director of transportation for Newton County Schools southeast of Atlanta, said he is “gravely” concerned about the law’s effect on the safety of all students during school bus loading and unloading.

“This creates an unsafe bus stop across our entire state,” he told STN, explained that motorists might now interpret the new law to mean they never must stop for school buses. “From a GAPT standpoint, that is the message. It might sound like a negative message, but it’s true. And sometimes the truth hurts. We want to take a proactive and preventive approach to school bus safety, and HB 978 doesn’t do that.”

He added that the new law puts Georgia at odds with laws in its neighboring states of Florida, South Carolina, Alabama, Tennessee and North Carolina.

A recent STN survey of nearly 450 readers nationwide found that over 83 percent said illegal passing ranks as the biggest concern of school bus drivers during student loading and unloading.

Georgia Department of Education Superintendent Richard Woods weighed in on Aug. 21, saying HB 978 could endanger all Georgia students who travel to and from school on the yellow bus.

“In my role as leader of the Georgia Department of Education, I maintain my position that this change in law does not reflect best practices to ensure student safety,” he said in an Aug. 21 statement. “We cannot put our student’s safety at risk.”

He added that he will push for the law’s reversal when the state legislature’s 2019-2020 session convenes in January 2019.

Letter of the Law

Woods responded to a legal opinion published the day before by state Attorney General Chris Carr, who was providing legal guidance to the Prosecuting Attorneys’ Council of Georgia. The small organization consists of six district attorneys and three solicitor generals who analyze all new statute language.

“Raising the concern about the law change was an attempt to make sure that the prosecutors in Georgia could comply with their ethical obligations, not only by properly charging violators, but by refraining from bringing charges that would not survive judicial scrutiny,” said Carla Riefell Bozeman, director of communications for the Prosecuting Attorney’s Council.

The organization sent a letter dated Aug. 6 that asked Attorney General Carr if a vehicle traveling south on a three- or five-lane road with its lanes divided by a center turn lane rather than a grass strip or physical dividing median, should stop for a northbound school bus that has its stop arm extended and red lights flashing.

The new law does not specify the number of highway lanes, Carr concluded. He said that the newly added language no longer requires the south-bound car to stop. He also interpreted that the legislature’s intent was to specifically add new language on the turn lanes that further defines “separate roadways.”

The new language on turn lanes was absent from the original bill that was introduced by Rep. Chad Nimmer on Feb. 21. A month later, on March 21, the Senate Committee on Public Safety approved the new language as introduced by Sen. Brandon Beach, by a unanimous voice vote during a 25-second hearing. Within two weeks, the General Assembly combined both bills, with the Senate language intact, and passed it.

How and why the new language was added in the Senate remains up for debate. GAPT Executive Director T. Carlton Allen told STN that Nimmer’s office was unable to answer the question, adding that Nimmer’s representatives seemed as perplexed as GAPT was. But the legislation remained unchanged and proceeded to Gov. Deal’s desk for his signature.

Nimmer has not returned multiple phone messages left by STN on his cell phone or an email sent to his office.

However, Nimmer did seek an opinion from the General Assembly’s Legislative Services Council regarding the construction of the bill, namely, the new language of divided highways with a turn lane. He received an answer in a letter dated April 24 from Deputy Legislative Counsel Julius B. Tolbert, who arrived at a different conclusion than what Attorney General Carr would publish four months later.

Tolbert wrote that HB 978’s added language of “including, but not limited to, a highway divided by a turn lane,” already constitutes a separate roadway from the school bus, and as such, “would not seem to effect a substantive change from current law.”

Peter Skandalakis, executive director of the Prosecuting Attorney’s Council, said the unintended consequence of the new law is that district attorneys and solicitor generals can no longer prosecute illegal passers any time a middle turn lane is present. But he added there is widespread support to change the law as soon as possible.

“As soon as the statue is changed and signed by the governor, if we can get it done in the early part of the legislative session, it could happen sooner than July. It could happen the first week,” he told STN.

The 2019-2020 legislative session begins in January. Until then, GAPT said all school bus passengers on home-to-school routes remain in danger. STN was also in the process of determining what if any changes would need to be made to the state’s motor vehicle driver manual.

GAPT’s Allen said the association is seeking a state legislator to lead the repeal HB 978 and replace it with the previous law. It already obtained Gov. Deal’s support, but he terms out this fall. Allen said the presumptive Republican nominee had been current Lt. Gov. Casey Cagle, but he lost the party runoff to Brian Kemp. GAPT would need to also enlist the help of either Kemp or Democrat Stacey Abrams to ensure the law goes back to what it was.

Allen said he is also in discussions with safety stakeholders, such as the Georgia Sheriff’s Association. The organization is meeting in September to discuss the law change, and a spokesman told STN that it has placed a priority on helping to repeal and replace the law.

What the current law does not change is the training school bus driver and students receive for safe loading and unloading, such as how students cross to and from the bus stop, said Pat Schofill, director of facilities and pupil transportation for the Georgia Department of Education. “We’re not really changing our message to bus drivers and students,” he said. “It’s always been part of our procedures not to let kids cross more than two lanes [to and from the stop], including the one occupied by the bus.”

Schofill advised GAPT members of the pending law change at an administrative workshop this spring. He said school districts, especially those operating in rural areas, were asked to further evaluate their routes, to ensure no student would be placed into harm’s way, by now being forced to cross more than two lanes.

Schofill added that some metro Atlanta school districts already route their buses to avoid any students crossing the street, by picking them up or dropping them off on the same side of the road as their residence. But, he added, that practice is often impossible in rural areas, without extending the length of bus rides and causing the bus drivers to “zig-zag” across the county.

The same goes for many suburban areas, said Rick Grisham, executive director of transportation for Cobb County School District and Region 2 director for the National Association for Pupil Transportation. He told STN that limiting student pickup and drop off on the same side of the street as their residence is also not a feasible practice in many suburban areas, like the one he oversees in Marietta (northwest of Atlanta).

Meanwhile, one welcomed addition to HB 978 is that motorists who are fined for illegally passing school buses, now must pay before they can annually renew their vehicle’s registration. Schofill said that counterbalances the removal of increased fines for subsequent violations. Previously, no mechanism existed in the law to require motorists to pay first infraction fines, if they were never again caught illegally passing a bus.

The prior law set the fine at $300 for the first illegal passing offense, $750 for the second and $1,000 for the third. Schofill said the local school bus industry was able to influence the state legislature to set the new fine at $250 for all incidents, after lawmakers initially reduced the figure to $200.

In 2010, Georgia passed its law allowing school districts to use video cameras to capture illegal passing incidents and local law enforcement to levy fines against the offending motorists. But it was unclear at this report how many districts have the technology. Neither the department of education nor GAPT currently collect this data.