LAUSD Solution to School Bus Driver Shortage: Grow Your Own

The Los Angeles Unified School District has come up with a remedy for the bus driver shortage that is plaguing school districts nationwide. LAUSD is establishing a training academy to produce its own homegrown school bus drivers.

While many school districts nationwide are lamenting the problem of bus driver shortages, transportation officials at LAUSD got together with other district departments and developed a plan to lessen the impact of their driver shortage, encourage students to complete school and provide them with jobs within the district, as well as a potential career path after graduation.

“Because of the industry-wide shortage we’re having to come up with more creative ways to recruit bus drivers,” said LAUSD Transportation Director Mark Harris. “We’re trying our best to close the (driver shortage) gap in viable ways that make sense.”

To accomplish this goal, in May 2016, the district established its Transportation Career Prep Academy, a 6-week training course that includes a classroom component and behind-the-wheel training requirement for high school graduates and young adults age 18 and older interested in a career in the student transportation industry.

The training is free and upon completion of the program, qualified drivers hired by the district can earn from $15 to $27 an hour, get medical and dental benefits, paid holiday and vacation time as well as retirement benefits. They are also eligible for tuition reimbursement for college classes, part of an agreement with LA City College to encourage drivers to earn an associate degree.

Candidates must pass a rigorous vetting process that includes a background check, safe driving history, a literacy test and have the right to work in the United States.

The academy is in its inaugural year so the results are still coming in, but LAUSD Training Manager David Lee said the outcomes appear positive.

“We’ve had several success stories where individuals have completed the process and they’ve started working,” he said, adding that the district is shot about 85 drivers in a fleet of 1,100 positions. “We started with 20 individuals. Several have started employment and several are in the process of completing their training.”

As with other school districts, LAUSD officials attributed the shortage to a number of factors from pay to flexibility in work hours. “It’s tough to put your finger on one item,” Lee said.

He explained that the plan is to reach out to the academy once a year for recruits. The next class begins in June 2017. “We’ve had very positive responses,” he said. “This is a new experience and everyone is excited to be a part of it moving forward.”

The academy was established just months before new final rules concerning bus driver qualifications, training and monitoring were published in the Federal Register by the Federal Motor Carrier Safety Administration and the NTSB. Lee said the federal rules would not adversely affect their recruiting because California’s laws are stricter than the federal rules and the district’s requirements on bus drivers are more demanding that the state’s.

Lee said the DMV regulates CDL’s and the CHP participates as the third-party testing agency for school bus drivers.

“The California Department of Education heavily regulates all school bus drivers in the state,” Lee said. “They give us the curriculum that we should follow in the classroom as well as behind the wheel.”

District spokeswoman Ellen Morgan said that overall the new federal rules have little or no impact on the district’s hiring practices. “In addition, we are collaborating with the City of Los Angeles Economic Development to recruit potential hires through their workforce centers and job fairs,” she added.

Harris said quality candidates are encouraged to enroll and take advantage of the opportunity. “I view the academy as a positive approach,” he said. “This could provide a career path for many of these students. There is a career pathway there.” 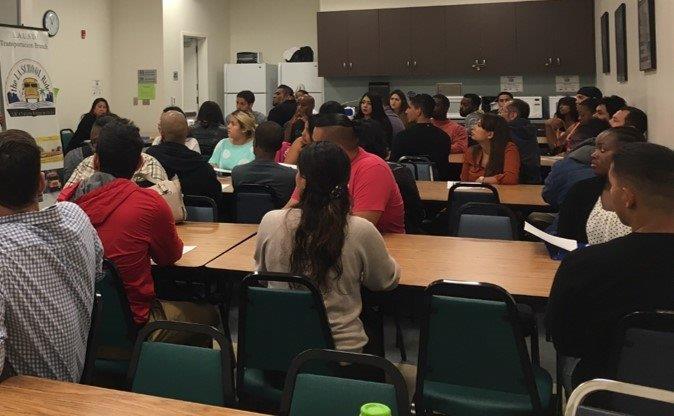