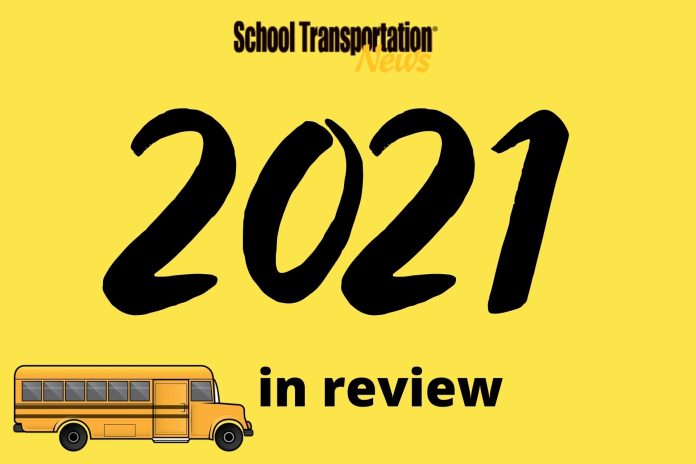 As the editorial staff looked back at the events that occurred in 2021, articles relating to the school bus driver shortage and masks requirements on board school buses were among the most popular web articles consumed by readers.

However, three out of the 10 most-viewed articles reported deaths or injuries of students, bus drivers or teachers.

There were also positive news articles among the Top 10. While masks and vaccinations are being required for drivers and students, school bus driver shortages continue, and new partnerships are being formed. Professionals continue to look for alternatives amid labor shortages in order to keep safely transporting students to and from school.

And for that, we say thanks to the hard-working professionals in every part of our dedicated industry.

The following countdown of news articles indicates the date of publishing and reader views, according to Google Analytics reports.

The video showed footage of a 6-year-old student being dragged by her school bus. School bus driver Melinda Sanders and Jefferson County School District in Louisville, Kentucky are both being sued for negligence. The 6-year-old girl was gravely injured when her school bag got caught in the bus loading door, and the driver didn’t notice. The child was dragged more than 1,000 feet. Sanders was fired following the incident in 2015. She is being accused of breaking 16 rules that school bus drivers must follow.

Sen. Kristen Gillibrand of New York sent a letter to the U.S. Department of Education Secretary Miguel Cardona urging clear guidance for states and school districts on how they can use Elementary and Secondary School Emergency Relief (ESSER) funds to hire and retain school bus drivers. ESSER funds included in the three COVID-19 recovery bills, the most recent being the $1.9 trillion American Rescue Plan that was signed into law on March 11, provides states and school districts with federal funds that can be used to retain and hire bus drivers as well as other staff members.

As the Biden administration makes its push to garner support for its ambitious and controversial $2 trillion infrastructure proposal, electric school buses are taking center stage. Contained within the plan to increase job and wages as well as infrastructure via a corporate tax hike is $20 billion to electrify at least 20 percent of the national bus fleet. It also would provide $32 billion in financing to help electric vehicle manufacturing and address job creation.

Editor’s Note: When the bill was signed into law by Biden on Nov. 15, it consisted of a total of $1.2 trillion, $5 billion of which funds the purchase of electric and low emission school buses powered by CNG, propane and biofuels over five years.

As the school year started nationwide, many questions related to masking on buses continued to arise.  Should students and drivers be required to wear face coverings? According to the National Conference of State Legislatures (NCSL), at least 13 states including California, Kansas, New York and Pennsylvania — publicly supported the CDC order as it applies to bus transportation in their own state’s COVID-19 safety procedures. However, states like Florida, Arizona and Texas prohibit local entities including schools from imposing mask mandates. Many of these instances have gone to court for review.

FirstGroup plc announced the sale of school bus contractor First Student and First Transit to EQT Infrastructure, one of the world’s largest infrastructure investors. First Student is also embarking on transitioning its entire North America fleet of 40,000 school buses to run on electricity. Meanwhile, FirstGroup stated in its own release that it has also proposed to increase payouts to its shareholders, to $688.6 million from $502.7 million.

Amazon and The Lion Electric Company entered into a master agreement for $1.1 billion in new electric truck purchases that will accelerate the manufacturer’s plans to ramp up total EV production, including that of school buses. Patrick Gervais, Lion Electric’s vice president of marketing and communications, told School Transportation News that Amazon confirmed an initial order of 10 trucks, with the potential of buying 500 trucks per year through 2026. Future Amazon orders could account for a maximum of 10 percent of Lion Electric’s total annual production output.

Following President Joe Biden signing Executive Order No. 13998, the Centers for Disease Control and Prevention (CDC) in conjunction with the U.S. Department of Health and Human Services announced that any passenger traveling via public transportation must wear a mask while onboard the vehicle and at transportation hubs. This directive includes school buses. However, the mask mandate does not apply to anyone under the age of 2, a person with a disability who cannot wear a mask or cannot safely wear a mask because of the disability as defined by the Americans with Disabilities Act, and a person for whom wearing a mask would create a risk to workplace health, safety or job duty as determined by the relevant workplace safety guidelines or federal regulations.

1. Washington School Bus Driver Stabbed to Death with Students on Board
(Published on Sept. 27, 2021)

On Sept. 24, Richard Lenhart, a 72-year-old school bus driver for Pasco School District in Washington state, was stabbed to death by an intruder while elementary students were also on board. Lenhart was preparing to transport 35 students to their home, when Joshua Davis, 34, approached the stopped bus just after students finished boarding at the school site. Police stated that Lenhart reopened the doors to see what Davis wanted. When Lenhart responded that the bus did not travel to Road 100, Davis turned to leave. However, police allege that at that point he produced a knife, turned back and attacked Lenhart, who was belted in his seat behind the wheel. The attack left Lenhart severely injured, though he was still responsive to witnesses, officers and medics at the scene. He was transported to a regional trauma center, where he later died from his injuries.