Do You Know Where Your Students Are? 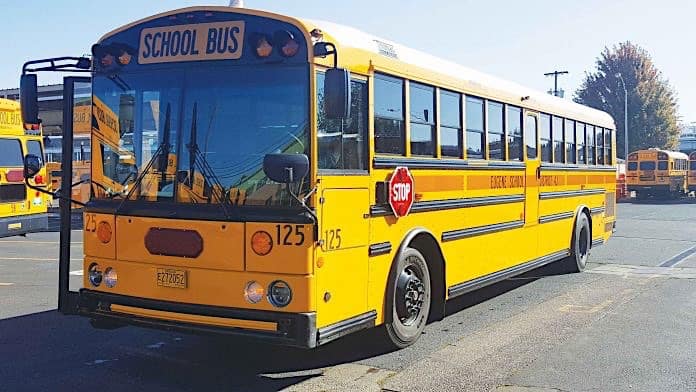 Perhaps no school year has been as anticipated, and feared, like the 2018-2019 school year. Student safety became more than a campaign slogan during this past summer, as state and local officials attempted to walk the walk in two key safety areas—school campuses and school buses.

To make school buses safer, lawmakers turned to technology to prevent the recurrence of several tragic events that resulted in deaths inside and outside the bus. Two key pieces of legislation, one in California and one in New Jersey, were to be enacted by the start of the school year.

These actions hastened the transition of safety technology from the commercial sector to student transportation. The technology includes 360-degree cameras that give the driver an overhead view of the bus; student detection sensors that notify bus drivers with an alarm upon sensing movement within 10 feet of the bus; radar that warns the driver of any metal objects in the road and reads speed signs; alarms that warn the driver if the bus drifts out of its lane; technology that requires the driver to walk to the rear of the bus to ensure no student is left on the bus; collision warnings if the bus gets too close to another vehicle; and stabilizers that will help right the bus if it moves into a skid.

Much of this technology was on display at the STN EXPO Reno in July. All the major bus OEMs are making variations of these technologies available on their buses, according to the wishes of school districts. With so much cutting-edge technology that is now available, and in some cases, required by law, the question becomes how many school districts can afford it? The answer is not as many as you’d like, but more than you’d think. 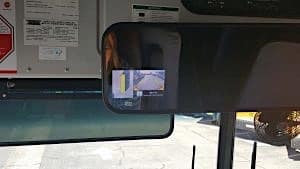 A View From the Top

That the school bus is the safest form of travel for students to and from school is a statistical fact. Another fact is that to get on and off the safest form of travel, students must navigate a no-man’s land called the Danger Zone or red zone, a 10-foot area around the bus. This is where students, especially younger students, can disappear from the bus driver’s sight. Students are vulnerable to motorists who run the stop arm when they cross the street, but they are also in great danger from their bus if they are caught in this Danger Zone.

Statistics are kept on the number of fatalities that occur at bus stops, but no such data exists for the number of injuries, because most states do not require school districts or police to report that information.

Safe Fleet is set to announce new safety technology this month at NAPT that will help protect students in the danger zone. “Children continue to get injured or killed each year by passing motorists,“ said Tom Gill, senior vice president of Safe Fleet’s Advanced Technology Group. “We’re approaching the problem differently by using video, sensors, artificial intelligence, and deep learning to analyze when a vehicle is not likely to stop, and warn students and drivers it might be unsafe to cross.”

In a recent STN poll, almost 85 percent of transportation directors said illegal passing was the greatest fear of their bus drivers. Another 25 percent said ensuring students were away from the bus and out of the Danger Zone was the biggest concern.

To combat this fear, technology companies have developed 360-degree cameras that give the bus driver an overhead view of the bus whenever it is stopped and the loading door is open.

Mike Tauscher, assistant transportation director for Norman Public Schools in Oklahoma, purchased 24 buses with the 360-degree cameras, and another eight buses are scheduled for delivery in the spring.

“We were looking to enhance the loading process and make it safer for students,” Tauscher said. “It’s a very dangerous time and we have to keep track of all our students during that process. The other thing is you get these really tiny kids in kindergarten, and when they get really close to the bus, you can lose sight of them if you’re using just mirrors.”

When the bus is in reverse, the system displays not only a 360-degree view, but also a magnified view behind the bus. “Our drivers just love it, it’s done a lot for morale and for safety,” Tauscher said. “They feel much safer loading and unloading students. The last thing you want is to be in a situation where you say, ‘We should have done this.’”

Chris Ellison, director of transportation for the Eugene School District 4J in Oregon, has had a 360-degree camera system since August 2017. Ellison explained that the district connects an electronic control unit for the Seon inView 360 four-channel cameras to a Rosco Vision Systems Backup Monitor on his 10 newest Thomas Built Buses HDX. He said that while student safety is the primary reason for the system, it also helps reduce the number of minor accidents.

“Primarily, it was student safety, because we didn’t want students in the danger zone. Secondarily, it was the cost of the minor accidents we were having,” Ellison said. “The thought process was that if the drivers could see all around the bus, it would mitigate all the head-slapping accidents we were having, like backing into a mailbox or turning too tight and hitting a power pole.”

Ellison said that while he cannot justify the system on his special needs buses, he will eventually specify the 360-degree system on all of his full-sized bus purchases.

The Clark-Pleasant Community Schools Corporation in Indiana made news earlier this year when IC Bus selected it to pilot a smorgasbord of technology. Two of the school corporation’s buses were equipped with collision mitigation technology to avoid crashes, and electronic stability control to avoid rollovers. That technology is now standard on all new IC Buses. Transportation Director Bill Downin said the technology checked out in tests. “We really haven’t had the occasion to use it and I hope we never do,” he said. “The stabilization should help if you’re in the snow and start to slide.”

Downin said the buses were also equipped with radar that warns the driver of any metallic objects in the road on foggy days and it even reads speed-limit signs. “It reads the sign and it will stop if you don’t slow down,” Downin said. “It also lets you know when you cross the yellow line.”

Student detection systems use sensors to detect movement in the Danger Zone and sound an alarm to alert the driver. Ellison said he was interested in Thomas Built’s pedestrian detection system prototype when he saw it at the STN EXPO. While he thinks it is a good idea, one aspect concerned him.

“The pedestrian detection system is illegal in Oregon, because the detection box that mounts on the windshield is in the driver’s visibility area and creates a blind spot,” Ellison said. “I think it’s a great opportunity and a great add-on for the safety of school buses. However, in its current configuration, it’s illegal in Oregon.”

[Drivers] should check the crossover mirrors first, convex mirror and then the flat mirrors. if they look carefully, count kids and see the same number walking away from the bus or waiting for the bus to leave, they will be okay.

A Thomas Built Bus representative told STN that multiple school districts are interested in piloting the system. “However, we are in the final validation phase before putting the system into the field,” he reported.

Student detection systems are required in New Jersey by Abigail’s Law, named for a 2-year-old toddler who was struck and killed by a school bus, because the driver could not see her standing at the front bumper. Abigail’s Law has required sensors or camera systems to detect pedestrians around the perimeter of every newly manufactured school bus since April 18 of this year.

Understandably, demand for student detection systems has risen sharply since the law went into effect.

The Rosco 360-degree camera system is in use as a child detection system by at least six school districts and private carriers throughout New Jersey. Rostra Precision Systems, meanwhile, offers a student detection system in New Jersey and elsewhere that uses microwaves to detect movement within the danger zone and notifies the driver with a beeping sound.

School districts that do not have student detection technology must depend on training bus drivers to follow protocols and students to follow rules. “In the areas of loading and unloading, drivers are trained to check their mirrors, and rock and roll to see past the blind spots. We train them to use their mirrors as a system,” explained Ryan Hahn, transportation director for the North Clackamas School District near Portland, Oregon.

“They should check the crossover mirrors first, convex mirrors and then the flat mirrors. If they look carefully, count kids and see the same number walking away from the bus or waiting for the bus to leave, they will be okay.”

Among the biggest questions facing the industry as it proceeds into the new school year are how to determine if students have COVID-19 symptoms...
Read more
Special Reports

In April, John Benish, Jr., logged a multi-city flight from his home in Chicago to Dallas to Florida and home again. The first flight...
Read more
Special Reports

Getting vulnerable kids to school has always been challenging, but the spread of COVID-19 brings a whole new set of problems. How do you...
Read more
Special Reports

The COVID-19 outbreak that brought the 2019-2020 school year to a jarring halt in districts across the nation in March and resulted in a...
Read more