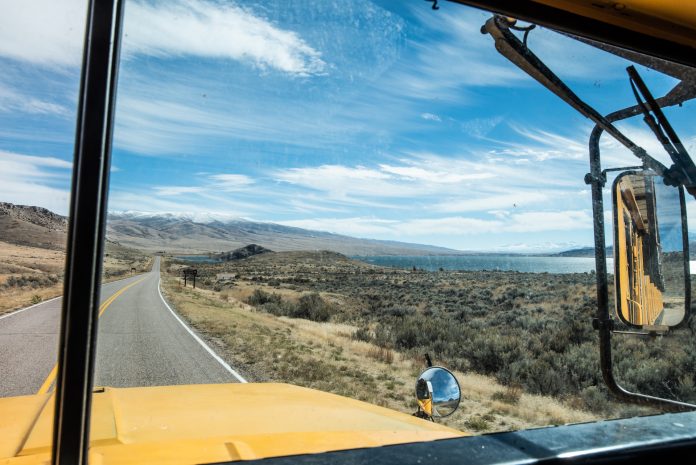 Without school bus drivers, the wheels don’t go round-and-round. And with an ongoing school bus driver shortage made worse by the COVID-19 pandemic, that might become a reality. Yet despite the oodles of responsibility given to drivers, including student management and increased cleaning, many shared with School Transportation News that they truly love their jobs. And while in some cases they report that they feel they are not treated with upmost respect they deserve, they continue to wake up early to transport the precious cargo that make their day.

Only 10 total school bus drivers responded in February to a salary survey delivered to 456 readers with those job titles (STN also posted links to the survey in Facebook driver groups). Still 71 percent of 17 drivers said they feel their supervisor values their position. However, that number decreases to 53 percent of drivers who feel their school district or bus company values their position.

A West Coast school bus driver, who wished to remain anonymous due to the sensitivity of the questions, told School Transportation News that being a school bus driver the most rewarding career she could have. Yet she feels that during the pandemic her district really dropped the ball.

She shared that the district supplied personal protective equipment (PPE) but it restricts movement and vision behind the wheel. Now, only monitors use PPE. She added that the district’s communication regarding the virus has also been misleading.

“The screening process is not very helpful. We ask questions and take temperatures, but scientist have stated that 80 percent of people who contract the virus don’t exhibit a fever,” the driver commented. “What is the point of taking student’s temperatures at all?”

She added that the drivers in her district are contracting COVID-19 but officials refuse to share information, citing the Health Insurance Portability and Accountability Act or “claiming ignorance.” She explained that transportation should have shut down when 10 percent of the driving force contracted the virus.

“Yet we didn’t get to stop working or even hear from management about exposure. I personally had close contact with three drivers who came down with the virus. Thankfully, federal laws changed Jan. 1, and employers now have 24 hours of learning an employee has gotten COVID-19 to let others know.”

She said the confusion doesn’t stop there. Her superintendent stated that frequent disinfection, which was thought at the beginning of the pandemic to be a key safety component, could now pose a health risk to students and staff due to the chemicals used. The superintendent also claimed the additional cleaning has limited to no impact on COVID-19 transmission, she relayed. Still, staff is directed to use chemicals to disinfect their buses and around schools. “If it is not safe for the students, why use them at all?” she questioned.

Another driver, who also wished to remain anonymous, said drivers weren’t provided with masks or properly fitted gloves last March when COVID-19 first shut down the school district, located in the southeastern U.S. But staff continued delivering meals and homework supplies to students in need. It wasn’t until August that the transportation department received information on cleaning and was provided with adequate PPE and supplies to stay safe.

While the driver shared that she loves her job and transporting students, a lack of understanding about transportation operations remains pervasive throughout the district. She added that the assistant principals juggle transportation with other priorities.

Meanwhile, Stephanie Steen, a First Student school bus driver who supports the Durham District School Board in Ontario, said she’s immunocompromised. She noted her location has been very proactive in assigning her alternative duties that don’t involve interacting directly with the students. She added that the district provides two masks a day to drivers, one for the morning route and one for the afternoon. It’s a part of Steen’s job to deliver the PPE supplies.

However, Steen observed that school bus drivers remain underpaid nationwide for the responsibilities they shoulder. Transportation directors and supervisors cited an average hourly wage of $19 for introductory school bus drivers, an increase of $2 from the fall of 2019, and $25 as the average maximum pay.

Steen said drivers should be paid on par with local transit operators as school bus drivers transport young students who prove to be far more distracting than other commuters. She added that in her location, transportation drivers formed a union and are now compensated well at about $15 hour plus supplemental pay based on any hours worked above 20 a week. She noted they are now paid from when the bus first starts running to when it’s parked at the end of day, instead of standard rate that only accounted for four hours of work.

The West Coast driver shared a different perspective. She said the pay she and her coworkers receive is in the bottom 25 percent statewide, while the superintendent’s salary is in the upper 25 percent. She added that her job feels expendable, and drivers should be paid more for the amount of training required and the process of obtaining a commercial driver’s license.

She noted that drivers must pay out of pocket for first aid certification, which is required by law, as well as other professional development opportunities.

The West Coast driver added that the district has several routes not covered. Mechanics, dispatchers and even supervisors have to pick those up. She noted that there are not enough drivers to cover when other drivers call out sick.

She said the driver shortage causes drivers to double up on routes, which leaves insufficient time to get from stop to stop, leaving drivers feeling like they have to rush. This, she added, causes stress and anxiety as they worry about the student’s safety.

“We have to double load our buses if we are shorthanded,” she explained. “We run late to stops to pick up and drop off. It’s a never-ending cycle, which in the district’s mindset can be worked out if other drivers just step up. Well, this is a huge safety risk for any and all of us, let alone the stress and anxiety we feel trying our best and still not accomplishing what we need to in ‘a timely manner.’

She added that in addition to the driver shortage, she believes the district decision-making is based on politics and whatever the parents want, without caring about the safety of the staff. “Personally, I don’t feel that our districts cares about or values any classified staff, let alone bus drivers,” she told School Transportation News. “I am not alone in feeling we are expendable to the district.”

The southeastern driver, meanwhile, said she also feels that the district does not value school bus drivers. The current driver shortage at her district adds more pressure. In addition, she noted, it’s hard to find drivers, and the district leadership as a whole doesn’t understand routing, which complicates the system even more.

Meanwhile, Steen said her Ontario operations also experiences a bus driver shortage, but her immediate supervisor understands the intricacies of transportation operations. She added her supervisor is very diplomatic and never raises her voice.

The West Coast driver said stop-arm cameras would help with motorists driving past her stopped school bus with red lights flashing. She shared that she brought this concern up to the district’s administration but was told the solution costs too much. She noted that there could be cuts made at the administration level, so the district could instead put “safety first.”

The southeastern driver added that her district had a plan three years ago to install cameras on the outside of every school bus, but that has yet to happen. She added that while the buses do have tablets on board, they don’t turn on and work as intended.

Steen noted that tablets are being added to school buses this year, and they will integrate with pre-and-post trip inspections. She said the technology will also help substitute drivers filling in on a route. In conclusion, Steen added that her branch has done a phenomenal job in supporting its staff amid the pandemic.