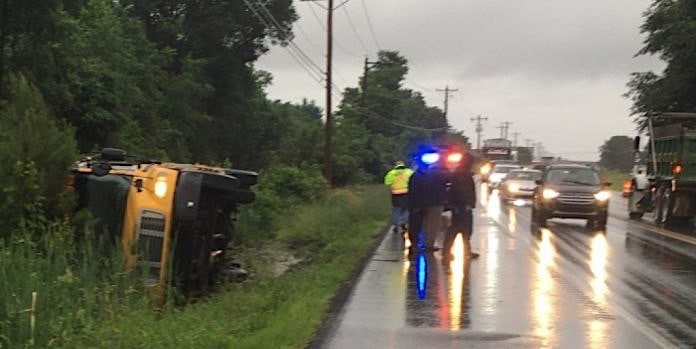 In what could have been a far more serious crash, two high school students were lucky to escape with only minor injuries from a school bus that crashed into a ditch and overturned today in rainy Middletown, Delaware.

Police said the bus, with two students and a bus aide on board, was traveling to Newark High School during moderate rush hour traffic on a rainy wet road.

“An unknown vehicle in front of the school bus applied the brakes due to slower moving traffic. It was at this time the bus driver attempted to avoid a rear-end collision and swerved to the right and veered off of the road. The bus then struck a ditch before rolling over onto its right side.”

The two students, a 17-year-old male, and a 16-year-old female, were transported to a local area hospital with only minor injuries.

Police reported that the driver and the bus aide were not injured, but the bus driver was charged with following a motor vehicle too closely.