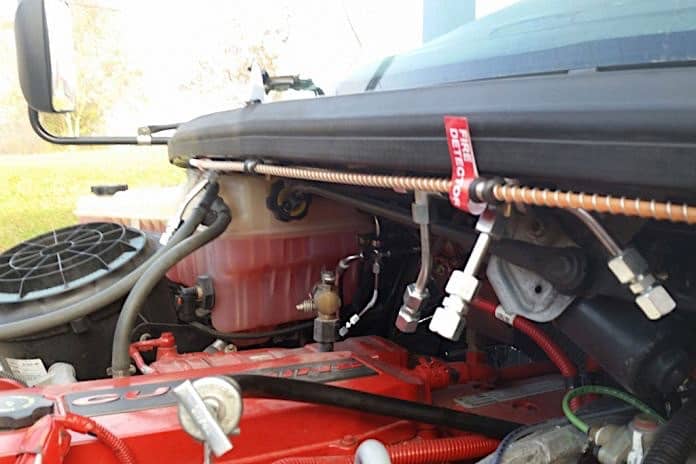 First installed on the district’s safety bus that demonstrates various safety technology, the decision to equip special needs buses with fire suppression systems came after a thermal event two years ago on a special needs bus driven by Mary Slate.

“The fact she had a fire creates a credibility of someone how truly understands the impact of the system to the driver, the students and parents,” said Brette Fraley, executive director of transportation for Kanawha.

Michael Pickens, state director of student transportation with the West Virginia Department of Education, confirmed that Kanawha’s pilot test will run one month. By mid-December, Pickens said he expects to fully authorize all county school systems statewide to specify the fire suppression systems from the state’s approved options list.

Pickens added that his office deemed there was no need for an extended pilot as the Fogmaker system manufactured by USSC Group is only installed in the engine compartment. While hoping no actual fires erupt on the 10 Kanawha buses over the next several weeks, he said that his office mainly wants to ensure the systems do not interfere with the engine, motor or other components during actual route operation.

Fraley said the Fogmaker systems are mounted in the chain box with lines running to nozzles in the engine compartment and works whether the bus is on or off mode. Systems can also be transferred to other buses and have a 10-year service life, with replacement tanks costing about $1,500 each.

Fraley added that the plan is to equip the remaining 28 special needs buses with the Fogmaker systems once the pilot concludes and the Department of Transportation officially approves the technology.

In all, Kanawha operates more than 200 school buses.