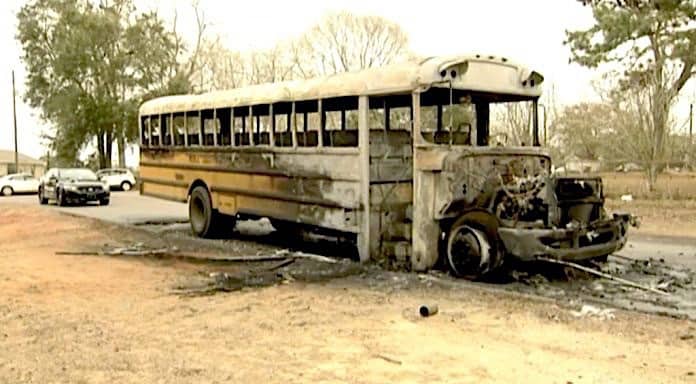 A fire completely destroyed an Alabama school bus this week, although no one on board was injured.

The Mobile County Public Schools bus was taking middle schoolers home as usual when the bus driver heard popping sounds coming from under the hood, WKRG reported. Flames started to spread, and she quickly got all the students off the bus. Local firefighters arrived on the scene shortly after 3 p.m. local time.

“The driver followed procedures, evacuated all the children safely off the bus, and no one was injured,” the district said.

Eyewitnesses Jonathan Barnette and Clayton Sullivan drove up as the fire was still in progress.

“We pulled up and the bus was already on fire a little bit. They tried to put it out with a fire extinguisher, put it out for a couple of seconds, but it came back up in flames even higher. We (heard) a couple pops after that; they said it was the tires blowing,” said Barnette. “I was kind of panicked. It was more along the lines of, get the children back and make sure they’re safe because if that blows we’re all going to get hurt.”

“I had the door open before we were even parked,” said Sullivan, whose two younger sisters had been riding the bus. “I made sure they were safe. Got both of them near me, made sure everything was fine. I’m just glad they were safe.”

By the time the fire was put out, the inside of the bus was charred and blackened. Video taken onsite by WKRG showed the cloth and padding had burned off and some seats were reduced to partially melted chunks of metal. The fire was hot enough to warp the aluminum siding.

The burnt bus was towed and another bus came to take the students home.

Details on the type of bus and cause of the fire were not readily available. A call to the district seeking more information had not been returned at the time of this writing.