However, the National Transportation Safety Board (NTSB) found that compartmentalization is “incomplete” and “does not protect passengers during lateral impacts with vehicles of a large mass, in rollovers and from ejection.” According to NTSB, an occupant crash protection system should be developed that would protect passengers in most accident scenarios.

In response, NHTSA updated FMVSS 207, 208, 210, and 222 to enhance compartmentalization with mandatory requirements for equipping all small Type A school buses manufactured as of September 2011 with 3-point lap/shoulder seat belts. Partly due to compartmentalization and the higher cost of larger school buses equipped with these 3-point seat belts, NHTSA only published voluntary standards for equipping school buses that weigh more than 10,000 pounds with the occupant securement systems.

Seat manufacturers CE White, IMMI/Safeguard and Takata/M2K have also solved the potential of losing passenger capacity on school buses with seat belts by creating seats flexible enough to fit two larger students, such as high schoolers, or three smaller elementary or some middle schoolers per seat.

Seatbacks in school buses are also now made higher, wider and thicker than before. After the most recent final rule, seatbacks will be required to be at least 24-inches high. All metal surfaces are covered with energy-absorbing padding. This structure must pass rigid test requirements for absorbing energy, such as would be required if a child’s body were thrown against the padded back. The equivalent of a seat back, called a barrier, is placed in front of the first seat at the front of the bus.

Finally, seatbacks cannot be farther apart than a distance that is deemed safe. Clearly, if the seats are too far apart, the child could be thrown too far before being cushioned and/or could be thrown outside the compartment altogether. Following further research by the federal government, 24 inches spacing was established as the optimal distance between school bus seats.

Of the nine states to pass school-bus, seat-belt laws, only Louisiana has been unable to fully implement the requirement to install belts in new buses due to insufficient funding.

The law in the Pelican State requires supplemental funding to be made available by the state legislatures in order to enforce two-point, lap seat belts. Texas was in the same predicament until June 2017, when the state legislature passed and Gov. Greg Abbott approved a new three-point, lap-shoulder belt to replace the old one that requires all school district purchases of new school buses to included the three-point occupant restraints, unless the local school board votes in a public meeting to defer the requirement due to lack of funds. The previous law passed in 2007 made implementation reliant upon funds being appropriated by the legislature.

Louisiana passed its law in 1999, the same year as Florida, which began requiring two-point belts on buses in 2001 but doesn’t make funding available to school districts. Charlie Hood, the retired director of school transportation at the state Department of Education and currently the executive director of the National Association of State Directors of Pupil Transportation Services (NASDPTS), said funding has never been an issue, as the cost of the restraint systems is less than 2 percent of the overall purchase cost of a new school bus.

“Districts have absorbed that upcharge over the years,” he added.

New Jersey updated its existing law in August 2018 to require lap-shoulder belts from the previous requirement of lap belts.

Nevada passed its three-point law in June 2017, and Diana Hollander, state director of transportation at the Nevada Department of Education, said requirements that students use the restraints will be written into regulation before the mandate went into effect for the 2019-2020 school year.

California and Florida law stipulate that transportation providers first allocate lap-shoulder belts on elementary-school routes. Both state laws and the one in New Jersey also protect any rider, school district or organization operating a school bus from being ticketed for not wearing seat belts.

Texas school districts must require students to wear their three-point seat belts on buses equipped with them, and they may develop a disciplinary policy to enforce seat belt usage. Texas law also requires student training on the lap-shoulder systems.

Individually, local school districts in other states may voluntarily install seat belts. The National Congress on School Transportation in 2005 passed a resolution that urged the National Highway Transportation Safety Administration to change the federal regulations to only allow lap-shoulder seat belts in school buses 10,000 pounds GVWR and less. NHTSA’s revised FMVSS 222 published in 2010 requires these three-point restraint systems in small school buses while leaving to school districts and states the decision on requiring three-point belts on school buses over the 10,000-pound GVWR threshold.

Iowa became the latest state to require three-point lap/shoulder seatbelts on all new school buses ordered on or after Oct. 2, 2019. The Iowa Administrative Code states that adding a lap/shoulder belt would cost an additional $123 per seating position.

Presented below are links to web pages devoted to seatbelts in motor vehicle transportation and in school buses. 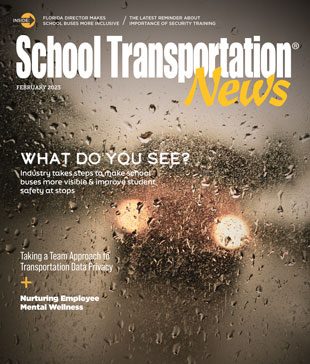 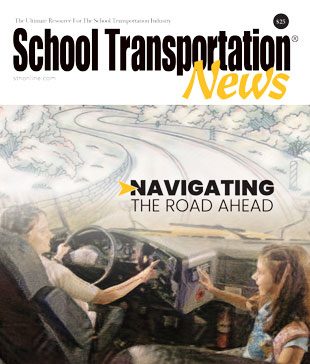