Child Seats That are Easier to Use Correctly are Safer Choices

KANSAS CITY — At the NASDPTS and NAPT meeting, Dr. Joseph O’Neil, a pediatrician from Riley Hospital for Children and Indiana University School of Medicine, discussed the dynamics of what is ultimately the best outcome for ensuring the safety of young school bus passengers.

He made the argument that the real choice for schools and parents should be framed as to whether to place the kids in easier to use seats that may not be the absolute best on the market vs. using the safest possible seats that aren’t likely to be used correctly.

His opening theme was that it takes a village to safely transport a child each day to school. He discussed his findings from the May 2018 study, and the role of the well-respected American 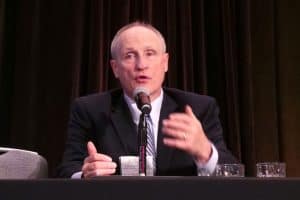 Academy of Pediatrics, with 60,000 pediatrician members.

Dr. O’Neil stressed that drivers and aides are on the bus with the special needs child for sometimes several hours a day, which is often more than some of their teachers, so their role is significant.

He reported that the guidelines that were released this year generated well-over 100 statements, and Dr. O’Neil answered every one of them. The document had over 40 different peer reviewers from all aspects of pediatric life.

Part of his presentation focused on the challenges that are involved in trying to safely transport a typical special needs pre-school student—a 4-year-old girl who has spastic quadriplegic cerebral palsy and weighs only 25 pounds. Other cases he mentioned were children with autism, who are “notorious runners; unbuckle them and swish, they are out the door,” he said. 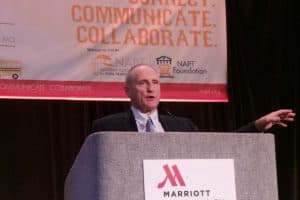 From Dr. O’Neil’s point of view, using a common seat on a school bus for the youngest students that can consistently be properly installed, is much better than a more formal equipment setup that isn’t always used correctly.

Dr. O’Neil said he supports other equipment, such as vests. “I do think that child safety vests are helpful.” He also recommends transporting many special needs children in their wheelchairs that come equipped with the proper securement devices, as being safer.

Dr. O’Neil conveyed that industry companies are listening more now to the people in the field. The manufacturers “are hearing us about the needs they have,” and are trying to respond quickly with innovations and improvements to their equipment and buses.

The medical equipment, though, such as oxygen tanks and trays, have to be securely stored on the bus, not just placed loosely on a seat, for safety reasons.

Dr. O’Neil emphasized that the school bus aides are incredibly valuable. “What are the child’s behaviors when they are trying to communicate a need? The aides spend the most time with that child. What is this child trying to tell me?” If there is an emergency, when do you call the EMS, which is usually right away, he added.

He strongly is in favor of action plans, which are so important for emergencies. Anaphylaxis is so common with students, for example, that staff must know in advance exactly how to deal with it. Dr. O’Neil urged bringing all of the stakeholders into discussions, to ensure the best outcomes. “Drivers and aides are the first persons to touch your child,” he said.

“This is really a labor of love that we do for our families,” he commented. “We felt that school buses for transporting special needs children were important enough to develop action plans.” The drivers and aides must make sure the seats are always placed correctly. They must also know where the local EMS stations are located.

And make sure you have an evacuation plan in place for each special needs child, he concluded.