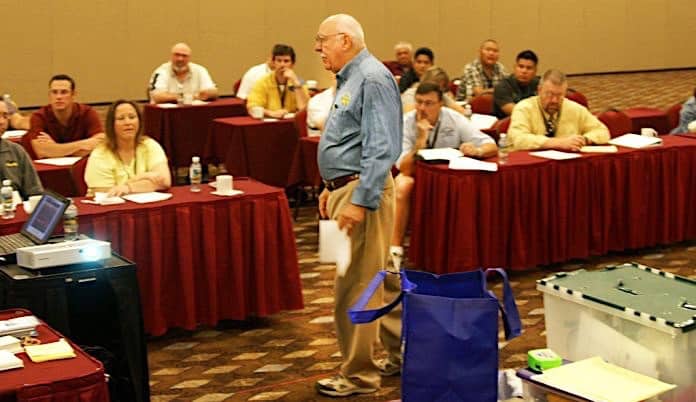 Richard “Dick” Fischer said this summer will be his last in the industry. He told School Transportation News that he will complete his final 40-hour School Bus Driver Instructor Course and advanced class by mid August. At that point, he added that he will still be available to make conference presentations, but that as he approaches his 79th birthday next year, “I’m getting tired.”

First and foremost, he said he will miss the friends and associates he has nationwide. He added that he enjoyed witnessing the progress the industry has made since 1952, when he started as a 17-year-old school bus driver for the U.S. Air Force.

After the Air Force, Fischer worked in transportation for the Orange Unified School District and Centralia Elementary School District in Buena Park, both in Southern California, ending his terms there as director of transportation. Fischer took part in forming the California Association of School Transportation Officials and started School Bus Safety Week with a letter writing campaign to President Nixon in 1969.

His idea to honor school bus drivers actually began in 1960, following a school bus crash in California but not involving his district’s buses. Still, Fischer told STN in 2008, he saw the public eyeing his school bus drivers and fleet with suspicious eyes. So he brought one of the buses to a local shopping mall, where his drivers dressed in professional uniforms displayed their training and the safety features of the bus. This was 17 years before NHTSA published its first Federal Motor Vehicle Safety Standards for school buses. Fischer’s bus was even equipped with seat belts for the drivers, eight years before the federal government required the saftey restraints in all vehicles except buses. It took another 15 years after the federal law for states to begin requiring seat belts.

Fischer also worked for ARA Transportation before starting his own consulting company, Trans-Consult, where he became widely known for his School Bus Driver Instructor Course. The focus is on not only driver training for the onboard safety of schoolchildren but to also limit liability and costly litigation as a result of crashes. Fischer was teaching the course at this writing in Indiana, and he told School Transportation News that he is also scheduled to teach in New Jersey, Virginia, New York, Missouri and Nebraska.

In addition to his training offerings, Fischer has also served as a contributing editor for STN and on the magazine’s editorial advisory board, while also presenting numerous times at the STN EXPO.