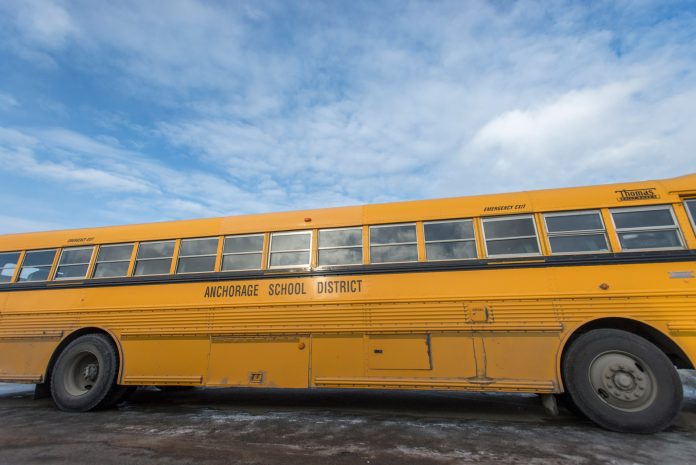 A “severe” school bus driver shortage prompted the Anchorage School District to implement a rotating service that reduces the number of students on buses at any one time by nearly two-thirds.

District officials announced the change earlier this month, and it went into effect on Thursday, the first day of the new school year.

Calling it the “best of bad solutions,” Deputy Superintendent Mark Stock said a shortage of about 70 bus drivers means only 7,000 of the 20,000 students who are eligible for school bus service could ride the bus when the new school year started on Thursday.

All general education routes will be divided into three cohorts and provided busing on a planned rotation. Each student cohort will receive three consecutive weeks of transportation, followed by six weeks without service. Additionally, routes were condensed for efficiency, meaning students will be walking farther to bus stops than in previous years.

While students with disabilities who have the related service of transportation required on their Individualized Education Programs as well as students who live within the district’s 1.5-mile walking radius of their school are not affected by the rotating schedule, all general education students are impacted.

“As new bus drivers come on, number of weeks off will decrease,” Stock said during an Aug. 10 press conference.

While noting that four times as many parents dropping off and picking up their students will be a challenge, Stock said parents are encouraged to drive their children and to carpool with other families as much as possible while the district continues to “recruit, recruit, recruit the best we can do.”

An incentive package for both new and existing bus drivers and bus attendants provides up to $2,500 extra for the first semester of the 2022-23 school year, with bus attendants being paid up to an extra $500 for the same period.

On Wednesday, Superintendent Jharrett Bryant posted on the district website that an additional three school bus drivers will be behind the wheel on routes next week.

Additionally, Stock said the school district is routing as efficiently as possible for in-house routes and those serviced by contractor Reliant Transportation. The company drives 153 routes with the school district picking up the remaining 73, an Anchorage spokeswoman relayed. She added that neither the school district nor Reliant, however, are currently experiencing a mechanic shortage.

Meanwhile, Bryant urged caution around schools as the number of vehicles increases. “Drop-off and pick-up of students to school [Thursday] will be different and challenging. As you make your way to our schools, please keep safety top of mind,” he wrote. “The volume of pedestrians and vehicles making the trek to schools will be heavy. We have coordinated with our partners at the Anchorage Police Department to make it as safe and smooth as possible.”