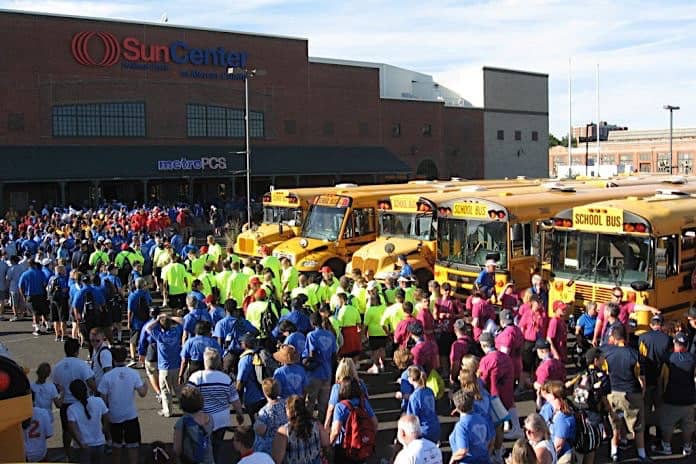 At the Special Olympics 2014 USA Games in New Jersey, participants were lauded for their dedication and teamwork — and First Student Location Manager Ursula Rinas used these same terms to describe the transportation professionals who worked nonstop to get the athletes, coaches and spectators where they needed to be.

Rinas said bus drivers from five locations transported more than 10,000 participants, including 4,700 athletes, on yellow buses to a dozen venues in the Lawrenceville and Princeton areas from June 14 to 20. Shuttle service was provided 12 to 15 hours a day, with drivers and dispatchers working shifts between their regular school runs.

She explained they were still operating their public-school routes because additional days were tacked onto the school year to replace lost snow days. School ended June 20, which was a week to two weeks later than usual, depending on the district.

“The drivers would do their school run, come over to help and then go back to finish their run,” she told STN. “I had to be there from morning till night all seven days just because I wanted to be. I wouldn’t have missed this for the world.”

Rinas, who has worked at First Student for more than two years, has seen a lot during her nearly three decades in transportation, but emphasized this opportunity truly changed her perspective. 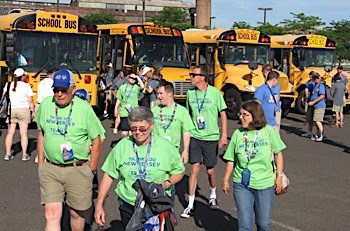 “It was such an inspiration for me to watch these athletes who were so focused on achieving a gold medal. It makes you reflect on your own life. These kids are not only focused on winning but also on participating and being part of a team. It makes you think: How can I be a better person?” she said, adding that her bus drivers are still abuzz about the athletes and still wearing the state pins some children gave them out of gratitude for their service.

Rinas recalled one young athlete who expressed concern about how busy she was making sure everything ran smoothly. “Emily kept coming up to me, more worried about me being on my feet all day. I was walking back and forth, loading the vehicles, and she came over, touched me on the arm and said, ‘Are you okay? Do you need some aspirin?’ It was so kind,” she said.

The girl was not alone in appreciating the magnitude of this event, which required 125 buses just for the closing ceremonies at the Sun National Center in Trenton, N.J. (pictured, at top). The ever-humble Rinas said that she and the rest of the team barely had a month to figure out how to plan and implement transportation to all the different venues.

“As the plans were developed, more venues came on board and the Special Olympics Committee created their program, so we adjusted with them, she continued. “Like with all transportation systems, you have to tweak it to make it work, but we were ready to rock-and-roll on day one.”