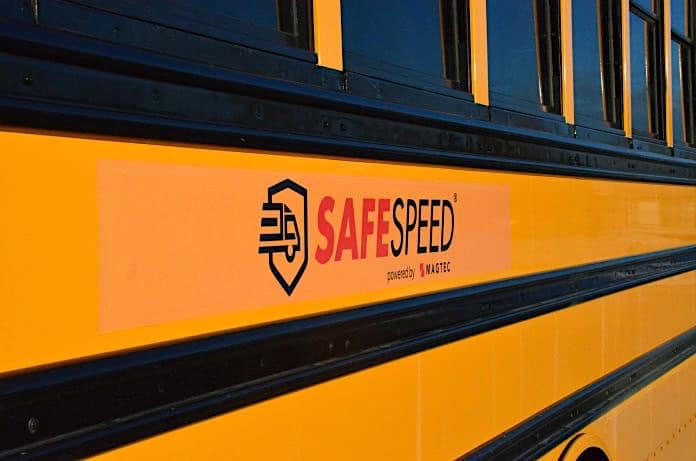 MAGTEC, a fleet management and tracking firm, conducted a recent pilot test in Canada that showed the power of GPS over other solutions (cameras, alerts and speed limiters) can help prevent school bus tragedies like the one in Chattanooga, Tenn.

Speed was cited as one factor that contributed to the Nov. 21, 2016 crash that killed six students and injured dozens of others. MAGTEC responded with its SafeSpeed solution, to reduce the number of similar speed-related crashes.

Bob Morisset, MAGTEC president and CEO, referred to the technology as the next step in school bus crash prevention. “We knew from our work developing speed-limiting technology for the trucking industry that driver coaching only goes so far,” he said. “If you really want to reduce speeding and reduce the chance of accidents and fatalities, you need to actually govern the vehicle.”

MAGTEC conducted a pilot study with 10 Canadian school buses where SafeSpeed technology rendered zero speeding events of 15 mph over the posted speed limit compared to 702 speed events with a bus unequipped with the GPS technology. Meanwhile, they said the study saw a 96-percent reduction in speed events of over 10 mph above the speed limit and a 90-percent reduction in 5 mph over the speed limit.

The pilot showcased that the significant amount of school buses speeding were tied to school bus driver pressure of being on time in picking up and dropping off students.

Purchasing SafeSpeed varies depending on fleet size and committal term but can be very cost-effective in ensuring school bus safety for students. SafeSpeed can improve fuel mileage up to 15 percent by remaining within parameters of posted speed limits, which reduce the risk of school bus crashes and retain drivers for the long run.