Russ Federico, executive director of operational support for the Marana Unified School District near Tucson, Ariz., shared that his district “has gone through a lot of challenges to convert to CNG,” but now has 15 such buses and is only ramping up.

After considering fuel and maintenance costs, propane was the “most cost-effective” choice for Upper Moreland School District near Philadelphia, said Transportation Manager Kelly Rhodunda. The district replaced its entire fleet at once, and now has 35 buses making up the first fully propane school bus fleet in Penn.

Tim Shannon, director of transportation for Twin Rivers Unified School District near Sacramento, Calif., has 16 electric school buses, making up the largest electric fleet in the nation so far.

Partnerships were crucial for all three districts. Marana Unified initially worked out a fueling arrangement with a local waste management company that had CNG stations, a move that Lawrence called “brilliant.” Rhodunda said a main reason for Upper Moreland’s decision to switch to propane was that they “wanted to do something for the community.” And Shannon worked with CARB and the local air district to leverage a $7.8 million grant for electric school bus purchases.

“We really did have a community interest in what we did with our fleet,” said Rhodunda. Her district conducted the research the community requested and gave rides in the new propane buses when they arrived.

Federico said Marana Unified used a healthy public relations campaign including press releases, bus magnets, and social media that especially aimed to connect with moms. “When we get parents fired up, that seems to provide the push we need,” he observed.

The health aspects easily win over school boards, and considering the Total Cost of Ownership, helps break down the biggest challenge of justifying costs, said Bédard. “It’s not easy, but take details into account and be credible,” he advised.

School bus manufacturer perspectives echoed the cooperative aspect of the school bus replacement process. “Whether it’s propane, CNG or electric, we want to sit down with you and see what makes sense for you,” said Caro of Blue Bird.

“Our goal as Lion is that most districts could and should go electric,” Bédard shared. “We’re not there to push electric if it doesn’t make sense, but in many cases, we think it does make sense.”

“CARB has a long history of working with school bus fleets and other partners,” Johnson said. Due to the average age of Calif. school buses being over the national average, CARB is focused on decreasing emissions and increasing ZEVs on the road through efforts like Cap-and-Trade funds and the Rural School Bus Pilot Project. She said CARB can also help by providing objective data on savings over the life of the bus, being a forum for information exchange, and assisting with infrastructure and fuel credits.

Funding is often the biggest hurdle, said Lawrence, so the story on student health has to be heard. “The squeaky wheel is getting the grease here,” she said, so vendors who provide the clean school bus technology or districts who want it, need to speak up.

“The Volkswagon funding is a shining opportunity, but there are others that you don’t want to turn away from or turn a blind eye to,” Lawrence said. She added that this is especially important, as over half of U.S. states have closed comment periods for their draft plans to the Volkswagen Mitigation Trust Fund. “Keep track of funding opportunities and when they open,” she reminded.

“Depending on what the need is, (CARB has) different things for different folks,” including many stackable funding opportunities, Johnson pointed out. “Combine resources where you can,” she said.

“You can turn $1 million into $4 million, if you think creatively in terms of leverage,” Shannon advised.

Rhodunda said Upper Mooreland bulked up its budget before getting its propane buses, which set them up for success later in the replacement process. Federico shared that he found pre-written bids helpful.

Considering the future is a crucial part of making school bus purchases, but all accounts from the three districts represented indicated that their green bus trends were not stopping any time soon. From its small start, Marana Unified is now looking to add a public-use CNG station to help offset costs for the district. Upper Moreland likewise has been a model for other districts in the area, and allows nearby districts and government organizations to fuel at its stations.

“It is a bit of a challenge having so many fuel types,” Shannon admitted. Consequently, he said he is working toward eliminating diesel and gasoline in his fleet, so as to focus on electric and CNG, as well as add more electric as that technology progresses.

Shannon said that electric buses are the most expensive initially, but he has seen them and CNG buses wind up lower than diesel or gas when the Total Cost of Ownership is considered.

Some attendees questioned the range of electric school buses. Bédard advised districts to “have options so it makes sense for you,” like adding more batteries to buses or setting up recharge hubs. The latter is an option Shannon said he plans to implement. 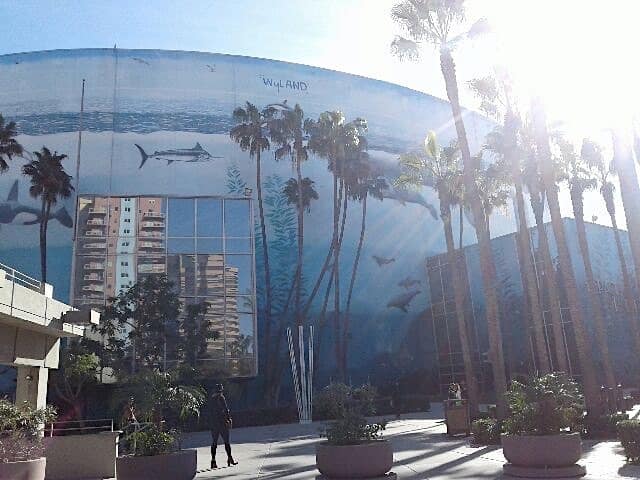 The Long Beach Convention Center, site of the ACT EXPO earlier this year. Photo by David George. View a gallery of the session below. (The first six images are courtesy of ACT Expo 2018.)