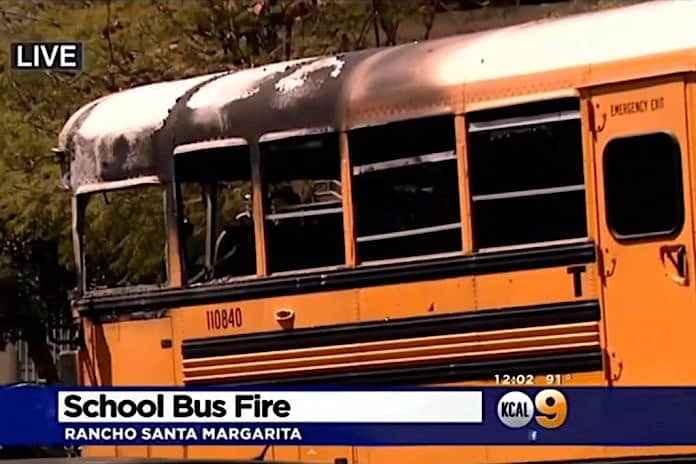 A Southern California school bus driver is being hailed as a hero after evacuating 35 students from the vehicle before it became engulfed in flames.

The 20-year veteran First Student driver recognized smoke and flames coming from under the hood and through the floor vent near her seat after she turned into parking lot to unload students at Rancho Santa Margarita Intermediate School in south Orange County about 8:15 a.m. local time on Friday.

A First Student representative explained the female driver has asked for privacy and has declined to release her name and all interview requests.

But her actions are being lauded by the school district, the local fire department and her supervisor after she ushered all the seventh and eighth graders off the bus through the front-loading doors and to safety. A school district spokeswoman told STN that the driver tried to use the school bus fire extinguisher on the flames but they quickly grew out of control.

“We’re very proud of her,” said Tammy Blakely, director of pupil services at Saddleback Unified School District. “She got the student’s off the bus before there was a big problem.”

The Associated Press reported that firefighters responded to the scene and extinguished the flames around 8:28 a.m. Orange County Fire Authority spokesman Steve Concialdi told the AP that the fire burned from the engine into the first three rows, and smoke damaged the rest of the bus.

Local station KNX 1070 NEWSRADIO reported that all the students were safe and physically uninjured, though three students were treated because they were “emotionally upset by the scene.”

Melvin Florence, the First Student location manager, told KCAL9 News that the driver was shaken up after the incident but is a true hero.

“She did everything right,” added Florence. “She wouldn’t consider herself a hero but I think she actually has some hero qualities and I’m very proud of her.”