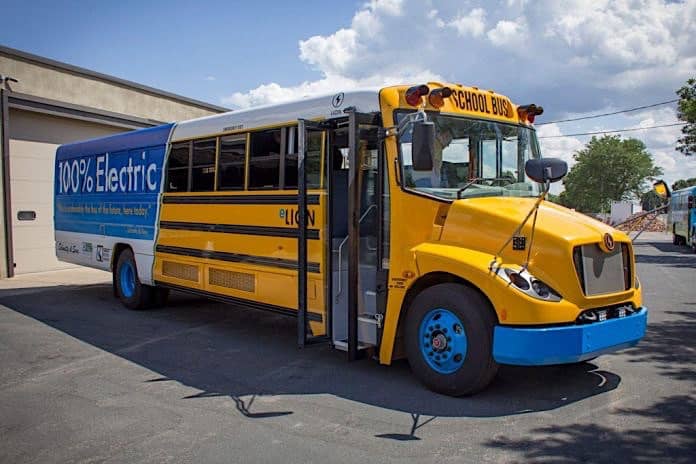 A Minnesota school district will operate the first all-electric school bus in the state this fall, to demonstrate how its technology works in cold-weather on both suburban and rural routes.

“We’re also seeking to document the economics of the bus on our system and as part of Schmitty & Sons’ bus fleet, including overall operation, maintenance cost savings and the calculation of emissions reductions,” said David Ranallo, manager of member services and marketing at Great River Energy.

Great River Energy estimates expected savings of $12,000 a year as the eLion does not need an internal combustion engine or transmission and reduced emissions of 15.1 metric tons of carbon dioxide. Green River Energy also said its Revolt program will power the eLion with 100 percent wind.

The eLion is powered up to five batteries and capable of a 100-mile range on one charge. Great River Energy said the average daily school bus route is 66 miles. Officials said the bus will fully re-charge overnight to take advantage of lower electrical demand and cost.

Representatives at Lion Bus, the Quebec-based company that manufactures the eLion, said at the recent STN EXPO that a full charge can be reached in about six hours. The bus also features a J1772 charging system that is compatible with most public charging stations across North America.

Schmitty & Sons COO Bil Forbord said the contractor considered other alternative-fuel school buses but chose the eLion because of the quiet, smooth ride and “next generation of operational and safety features.”

“It’s also very user-friendly for the driver,” he added. The eLion features touchscreen displays for battery-charge status and vehicle diagnostics.

Meanwhile, the Dakota Electric Association said it hopes to use the project to educate the public on the value of an energy-efficient and carbon-free technology for transporting school children.

“We are thrilled at the opportunity to bring this technology to our members,” said Jane Siebenaler, Dakota Electric Association business account executive. “Because of this collaboration, we are able to strengthen a member relationship, pilot cutting-edge electric bus technology and lay the foundation for what could be an excellent, energy-efficient school bus option.”

A spokeswoman for Lakeville Area Public Schools said the district is excited about Schmitty & Sons operating the first electric school bus in the upper Midwest.

“We have worked with Schmitty & Sons for many years, and appreciate the excellent work they do for our students and families. We also appreciate their continued innovative approaches to student transportation, including a mobile internet-ready classroom outfitted with digital tools and resources that we call the Smart Bus,” said Amy Olson, Lakeville’s communications director.