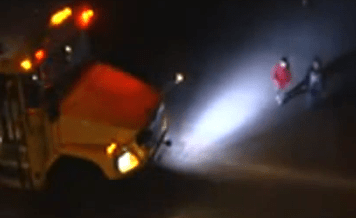 No matter where they live, many children board school buses in the dark most of the year. Now, the Livingston Educational Service Agency (LESA) in Michigan is trying to increase safety by piloting the new Gardian Angel Lighting System for school buses (pictured at left).

The Marion Community Schools (MCS) Transportation Department launched a pilot program in March and began using the Gardian Angel Lighting System, distributed by Unity School Bus Parts. Pinckney Community Schools has installed the system on its entire bus fleet, and Howell Public Schools is currently evaluating it on two of its buses.

Alice Johnson, LESA director of transportation, noted that the most dangerous part of her drivers’ job is picking up and dropping off students at their bus stops. Since August, three teenagers have been run down while walking to their bus stop or school in the dark. Research by both the Kansas Department of Education and STN shows that older students are especially at risk as they approach or wait at dark school bus stops, with a half-dozen killed by passing motorists annually.

“It is so critical to have good visibility, and this light enhances the walking path of the students. Anything that promotes safety for the students is a value and something I think we should do,” said Johnson, adding that many bus drivers are “noticing and have commented on how impressed they are with the visibility.”

The Gardian Angel’s two red, high-intensity strobe lights are mounted directly to the front hood of the school bus and aimed to shine across the road, illuminating a path for students who are crossing in front of the bus and for oncoming traffic. The lights triple the viewing distance for oncoming motorists by illuminating the students and making them more visible.

The RTC Supervisors learned about the Gardian Angel Lighting System in June at the annual Michigan Association of Pupil Transportation (MAPT) conference.

In October, product inventor Steve Garden introduced the Gardian Angel lighting system to NASDPTS conference attendees at a seminar that included a unique demonstration. The strobe lights were dunked in a 1-gallon milk container filled with water to prove that their strength can withstand rain or snow.