Diesel is the New Alternative Fuel

The dominance of diesel fuel has not waned in the school bus industry. Nearly 93 percent of all school buses purchased in the United States and Canada still operate on diesel fuel, despite a higher-than-ever focus on alternative fuel. New lower-emissions diesel engines gearing up for launch in just a few months are expected to further cement diesel’s position as the industry’s fuel of choice.

“We are hearing a lot about alternative fuel in the industry right now,” said Caley Edgerly, president and CEO of Thomas Built Buses. “However, instead of focusing on the alternative fuel trends, school districts should be talking about which school bus operates efficiently, is better for the environment and saves money on fuel costs. It’s always great to have options, but when it comes to fuel choice, diesel remains the best fuel option for fleets today.”

Looking back 10, 15, even 20 years ago, it would be unheard-of to call diesel a clean fuel, let alone claim that diesel is just as clean—if not cleaner—at the tailpipe than any other alternative fuel. From a certification standpoint, clean-diesel emissions are ninety percent cleaner at the tailpipe than they were 10 years ago, and today can stand up and even surpass the emission standards of all other alternative fuels. This in part is due to an overall cleaner fuel type and to new advances in engine technology, as well.

Driven by tougher EPA emissions standards, today’s diesel is composed of an ultra-low sulfur formula, which became standard in the United States in 2010. This new diesel formula is estimated to remove 2.6 million tons of nitrogen oxide from the air per year and reduce soot and particulate matter by 110,000 tons per year. Breaking this down to a per-bus standard, diesel today now emits no more than .2 grams per brake horsepower per hour of nitrogen oxides and .01 grams per brake horsepower per hour of particulate matter, which is a dramatic decrease from years past. 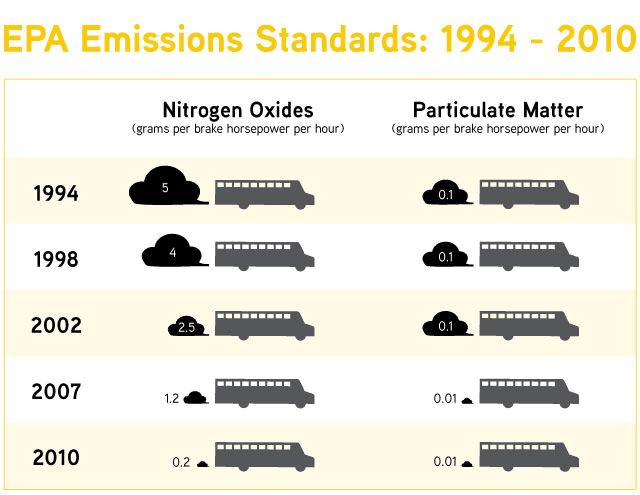 From an engine standpoint, the long-awaited Detroit™ DD5™ is set to launch in 2018. This new engine will be revolutionizing the industry with state-of-the-art technology that not only greatly minimizes emissions, but also reduces the headache of after-treatment maintenance and regen issues that have haunted technicians for years.

“What this means for districts is that they no longer have to seek alternative fuel sources in order to run a more efficient and cleaner fleet,” continues Edgerly. “Today’s clean-diesel engines, like the Cummins ISB 6.7L and the anticipated Detroit DD5, provide lower emissions and best-in-class fuel efficiency, power, proven performance and reliability, as well as the lowest total cost of ownership. Districts can now feel confident with diesel as their fuel of choice without having to invest in the time and resources needed to switch to a new fuel type.”

With new engine specs and a cleaner fuel, the remarkable cleanliness of diesel is in the numbers. As you can see in the table below, which is based on the most recent EPA engine certifications, diesel engines are certified well below EPA emission ratings and perform on par with, if not better than, other alternative fuels. 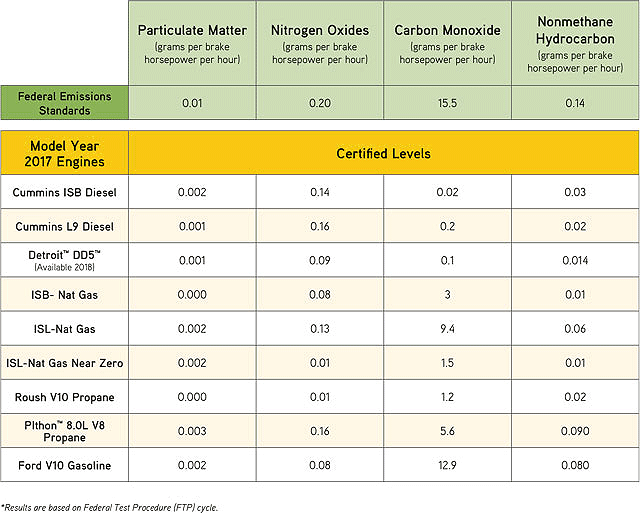 “When it comes to green fuel, the future is here,” concludes Edgerly. “And with new technology paving the way, districts no longer have to give up on the fuel that they prefer to provider cleaner air for their passengers and for the environment. Diesel has definitely become not only a contender in the field of alternative fuel, but today it is leading the pack and remains the fuel of choice.”

The Center for Transportation and the Environment (CTE) recently held its second webinar of the three-part series, “Electrifying Your Bus Fleet,” with a focus...
Read more
Partner Updates

Lindale Independent School District (ISD) provides education to 4,200 students across six campuses in northeast Texas, just outside of Dallas. And 1,900 of those...
Read more
Partner Updates

As many districts transition to distance learning for the remainder of the 2019–2020 school year, digital equity for students has become more imperative than...
Read more
Partner Updates

Wood County Schools in West Virginia was looking for a field trip management system that was more user friendly. busHive took them from an...
Read more
Partner Updates

Parents want to know where the buses are right now—and we give you the key to doing just that, effortlessly, reliably, and accurately. Give Your...
Read more
Green Bus

The U.S. Environmental Protection Agency announced it is now accepting applications from tribal governments for their share of an anticipated $2 million to reduce...
Read more