Transportation specialist Dawn Spooner, a 19-year veteran with the Washington County School District in Chipley, Florida, remembered when she moved into her role in the transportation office a decade ago.

“At that point we had no software,” she said, almost in disbelief. “It was maps on the wall.”

“I immediately put in a request to find a solution to streamline this process for routing,” she said.

About a year later, she got her wish when the district purchased Transfinder’s Routefinder. Since then, the district implemented a suite of Transfinder solutions, including GPS Connect, Tripfinder and Viewfinder.

GPS Connect is Transfinder’s GPS enhancement designed for Routefinder. It works with a district’s GPS system to display bus locations and path-points on Routefinder maps so district officials can see whether buses are where they are supposed to be.

Tripfinder is used to manage field trip requests, approvals and resource allocations. Viewfinder helps districts monitor the day-to-day operations of their transportation department from any computer, as well as analyze their planned vs. actual routes from the GPS.

“As far as routing goes, it helps me so much,” Spooner said. “We had in the beginning maps on the walls. It’s really hard to look at things and see where you’re crossing over each other.”

“I’m able to put up Routefinder and pull all my routes up at one time or zoom over each one and see where I can save fuel. In terms of just routing, it’s a miracle to me. I’m coming from old school days of maps on the walls and map books!”

“We have a really big county. It’s a vast area,” Spooner noted. Washington County covers 616 square miles in the northwestern part of the state. “We had buses that were running over the top of each other, doubling our fuel. In Routefinder you could see that two buses were going down the same street; before, it was really hard to visualize that.”

Transfinder’s solutions working in conjunction with GPS helped the district reduce this waste.

“We could see where they actually were going and make adjustments to the routes to cut on this doubling back and buses going down the same street,” Spooner said. “It has absolutely saved us fuel and miles.”

Other tools, such as Tripfinder, which work seamlessly with Routefinder, have also brought efficiency to the district.

“I love being able to do field trips through Routefinder,” she said. “Before it was a process of couriering field trips to this person or that person. It’s more streamlined. The secretaries can request them at the schools and then we look at them and can approve them or deny them.” She also likes the reminders she receives for such things as drivers needing their physicals conducted. 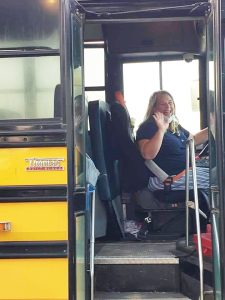 At a time when districts across the country are experiencing driver shortages, Spooner said efficiencies like those created by Transfinder are critical to maximize the work of the drivers they do have. Spooner said at her district, it’s all hands-on deck – or more like all eligible drivers behind the wheel.

“Our biggest hurdle is being short staffed. We’ve always had an issue with being short staffed. However, when Covid hit we had a lot of retirements, a lot of people said they were ready to get out of it,” Spooner said. “I can’t give you an explanation as to why it’s so difficult to find drivers right now. The pay is competitive. We pay $18.62 an hour, four hours guaranteed.”

As a result, Spooner and her boss are out there driving these days. “We have five mechanics on staff and they are just about driving every single day,” she said. “We just are having a real tough time staying staffed here.”

The district is not alone. In fact, the national school bus driver shortage has become mainstream news as it touches all types of districts, including small ones like Washington County School District. One national survey found more than half of transportation leaders (51 percent) say their driver shortage is either “severe” or “desperate.” And 78 percent of respondents said it’s getting worse.

Spooner said Transfinder’s solutions have played a role in helping to soften the impact the driver shortage has had on the district.

“We actually consolidated two routes at the beginning of this year to help with our driver shortage,” she said. “It would have been very difficult to do without Routefinder.”

And complementing the intuitive Transfinder tools is the award-winning support that Transfinder is known for.

“Y’all’s support is the best,” Spooner said. “Anytime I have to call, the support team is great.”