What are Lithium and Lithium-ion?

If you have spent much time reading about electric vehicles (EVs), it’s very likely you’ve probably heard of lithium-ion – the EV battery type and chemistry of choice, and what forms the backbone of today’s electric school buses. But many know lithium-ion as a name commonly associated with EVs, but not much more – so why exactly is lithium-ion so important to electrification, and how are these batteries used throughout their lifespan?

Lithium (Li) is the third element on the periodic table. While not as rare as precious elements such as gold, lithium is comparatively scarce, representing less than 0.0001 percent of Earth’s crust.

Due to its low atomic mass, lithium is the least dense material that can be found in a solid state at room temperature – and more importantly, it has a high charge-to-weight ratio. The most interesting lithium batteries to date are lithium-ion variants – which, unlike their cousin the primary lithium battery, can be recharged and used multiple times over. Lithium-ion batteries have a high energy density, making lithium-ion an ideal chemical composition for portable stored energy.

In the 21st century, lithium is found in almost everything that requires electricity to run while not being plugged into the grid. Cordless power tools, laptops, smartphones and most rechargeable devices use a lithium-ion chemistry composition. Such batteries are also found in electric vehicles – the next great evolution in transportation and sustainability over the coming decades as the world seeks to decarbonize transportation.

The following article answers many questions about lithium-ion batteries, including:

From Waste to Recycling

For a long time, lithium-based batteries reaching the end of their life were unfortunately considered waste, as the cost of sourcing new materials was much lower than that of recycling. The amount of lithium salvaged relative to its extraction cost was just too low. Lithium is also very reactive and needs to be properly handled and disposed of. Simply put, the technology to reuse lithium was not there yet.

However, the combination of several factors – including the ever-increasing fight against climate change, as well as the rise in electrified transportation – has resulted in an exponential increase in demand for lithium-ion. As a result, the whole process of batteries’ raw material production had to be remodeled. 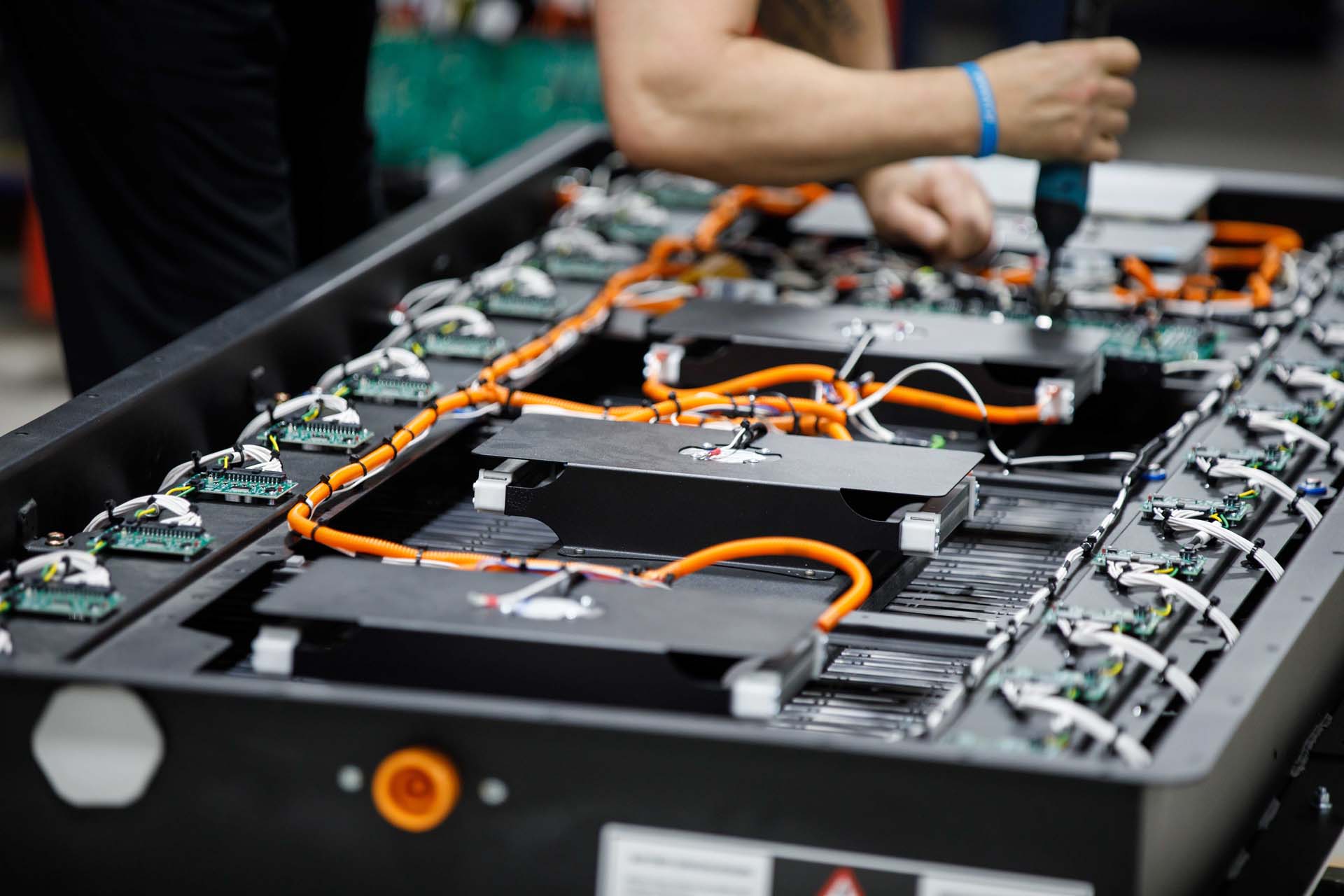 Lithium is currently one of the most efficient energy storage substances on Earth, and it comes as a finite quantity as well – not to mention that its scarcity increases with every battery that is unnecessarily disposed of. Fortunately, lithium has progressively been considered a reusable material rather than waste, thanks to new processes and technologies that allow us to extract more and more material from used batteries.

It is important to acknowledge that the manufacturing of battery-electric vehicles can be energy-intensive, in part due to the process of battery manufacturing. However, unlike a diesel or gasoline vehicle, from the moment the battery and electric bus or truck leaves the factory and takes to the road, it ceases to emit greenhouse gases (GHGs). Effectively from there on, these vehicles become increasingly carbon-neutral – in other words, the longer they are driven, the more GHGs emissions are prevented in comparison to a combustion-powered vehicle.

As the world continues to move toward increasingly clean energy sources, these benefits become even more clear – and as technology to recycle lithium develops and reaches the ability to salvage 100 percent of the original materials, then the manufacturing of electric vehicles will become even cleaner.

To put things into perspective, let us walk through the life of the average heavy-duty vehicle lithium-ion battery. Its average lifespan is estimated at 20 years – compared to an estimated 13 years for the average fossil fuel-powered car. But, did you know that the battery may not spend all of that time on a vehicle? There are actually several options for reuse that can prolong its lifespan.

A battery’s life is segmented into four usage stages, which are established relative to the battery’s energetic capacities and performance over time. Let us take a closer look at the phases of its life.

1. After being assembled from small cells into modules, as well as a larger pack (the main storage medium for a lithium-ion EV battery) a battery’s life starts in the usage stage, or the period of time it will actively spend on a vehicle.

During this period, the battery’s main purpose will consist of being charged to power the vehicle on its carbon-neutral routes, and of course powering the vehicle’s drivetrain on each of those trips. Thermal management via liquid cooling and advanced battery management is essential to keep it healthy during this time.

2. Battery technology continues to advance rapidly year-over-year. Once a battery’s energetic capacities degrade a little – an annual loss of less than 0.5 percent of its capacity when used in the typical school bus – newer, higher-capacity batteries will be available, at which point, the battery will move on to the permutation stage of its life.

During this period, there is the option to use it as a swappable secondary battery for vehicles that are utilized for extended periods of time – possibly outside of school transportation as well. This means that it will still be able to travel carbon-neutral miles, but over a shorter distance as its energy capacity will be diminished and will require more frequent recharges, since it will lose its charge a bit more rapidly.

3. As a battery’s energy capacities reach too low of a percentage for usage and permutation, it is taken out of use with vehicles and is sent to a battery energy storage unit – where it will be used for static energy stockage of lighter demand.

The battery is still very useful at this point and can generate extensive savings through off-grid energy storage, such as in a micro-grid to distribute energy collected either from V2G or from a renewable energy source such as solar panels and windmills, ultimately saving the owner/operator money on energy costs for their electric fleet.

This energy can then either be sent back into the grid when the demand for electricity is high, or used to recharge another vehicle more cost-effectively.

4. Finally, one day when degradation has eroded away at the useful energetic capacity a battery holds, it is taken out of use after a few decades, at which point it is recycled. As of today, we can recycle 95 percent of the battery. But as previously mentioned, in the next 10 to 15 years, we will be able to recycle 100 percent of battery materials.

Evolving technologies are making it possible to recycle materials that we used to think of as non-reusable, such as lithium.

In 2011, 27 percent of the global lithium produced was used in batteries, growing to 65 percent by 2019. As the demand for EVs grows, so will the demand for lithium. It is becoming a necessity for vehicle manufacturing companies to invest in solutions to reuse and repurpose batteries and the raw materials used in their construction. Efforts are already being made to address this 20-or-so-years-from-now problem, which is great news, because the industry is already thinking ahead.

The advancement of recycling solutions to reuse the amount of lithium that is currently in circulation is the key to mitigating any of the potential environmental impacts associated with the material’s extraction, as well as enabling the real sustainable potential of this technology.

Make your next move a bright one. Learn how by emailing info@thelionelectric.com.

This issue of School Transportation News contains articles on fleet electrification, stop-arm technology, the transition from 3G to to...