The FBI designated 27 shootings in 2018 as active shooter incidents, according to its latest report, Active Shooter Incidents in the United States in 2018. A leading school security expert said student transporters should take note.

National security expert Michael Dorn is the executive director of Safe Havens International, the world’s largest K12 school safety center. He provided analysis to School Transportation News on Thursday on the importance of the FBI’s Active Shooter study and what lessons it includes for school bus officials nationwide.

“In my opinion, this is their best work in the area yet and is an invaluable resource for preventing these types of attacks,” Dorn said, adding that the attacks can include those that might occur on school buses. Key findings of that June 2018 are at the conclusion of this article.

“The FBI has conducted some superb research in the area of active-shooter prevention. The FBI research on pre-attack behaviors of active shooters is of special importance, he observed. “In my opinion, it is must-read material for those who are interested in preventing planned attacks on school buses.

“As we have had 11 planned fatal shootings by employees at public and faith-based schools in the U.S. to date, we also advise school officials that unfortunately, school organizations are not immune to the potential for these types of violence. As with manufacturing, corporate, government, hospital, military and higher education organizations, K12 school systems and nonpublic schools must consider this risk.

“Fortunately, the FBI research can help address this risk for students, parents, employees, and others who have a connection to schools or school buses. While we are painfully aware of the tragedies that have taken place in our nation’s schools, most Americans are not aware that many planned attacks on U.S. K12 schools and school buses have been successfully averted through behavioral prevention approaches.

“We caution school transportation personnel to consider other predominant attack methods that have been used to target buses. A careful review of school bus attacks in the U.S. and globally demonstrates that focusing primarily on active shooter events can be a dangerous and ineffective approach. This is another reason that behavioral detection approaches are so important, as they can help detect potentially dangerous individuals regardless of the type of weapon, timing or site of a planned attack.”

Excerpts from the 12-page FBI study that specifically involve schools are included in condensed form, below.

STUDY INTRODUCTION:
Active Shooter Incidents in the United States in 2018

As with past FBI active shooter-related publications, this report does not encompass all gun-related situations. Rather, it focuses on a specific type of shooting situation. The FBI defines an active shooter as one or more individuals actively engaged in killing or attempting to kill people in a populated area.

Implicit in this definition is the shooter’s use of one or more firearms. The active aspect of the definition inherently implies that both law enforcement personnel and citizens have the potential to affect the outcome of the event based on their responses to the situation.

Related: A Study of Pre-Attack Behaviors of Active Shooters in the United States Between 2000 and 2013

The methodology articulated in the 2000-2013 study was applied to the 2018 incidents to ensure consistency. Excluded from this report are gang- and drug-related shootings and gun-related incidents that appeared not to have put other people in peril (e.g., the accidental discharge of a firearm in a bar).

The findings in this report are based on publicly available resources, FBI reporting, and when available, official law enforcement investigative data. Though limited in scope, this report was undertaken to provide clarity and data of value to federal, state, tribal, and campus law enforcement as well as other first responders, corporations, educators, and the general public as they seek to neutralize threats posed by active shooters and save lives during such incidents. 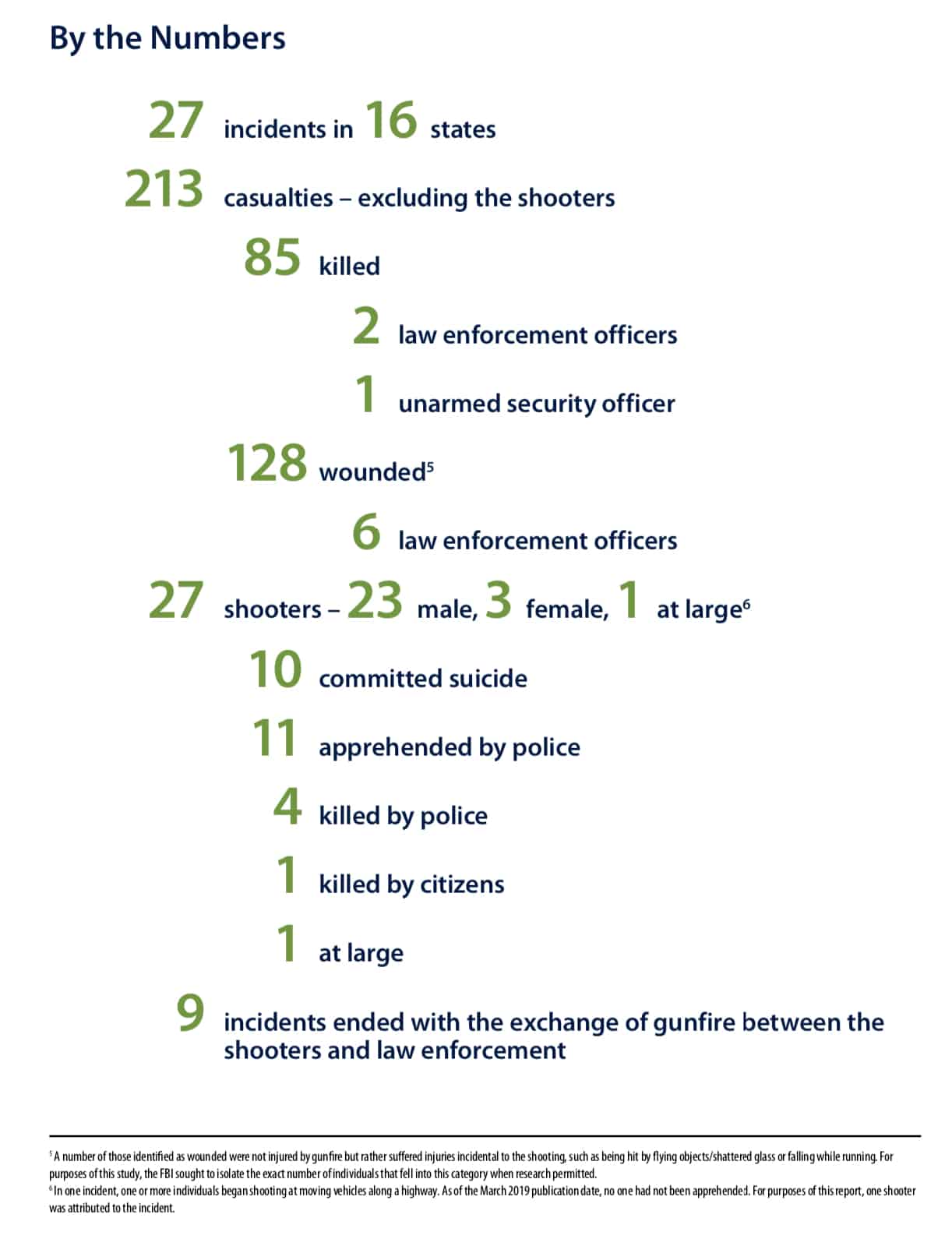 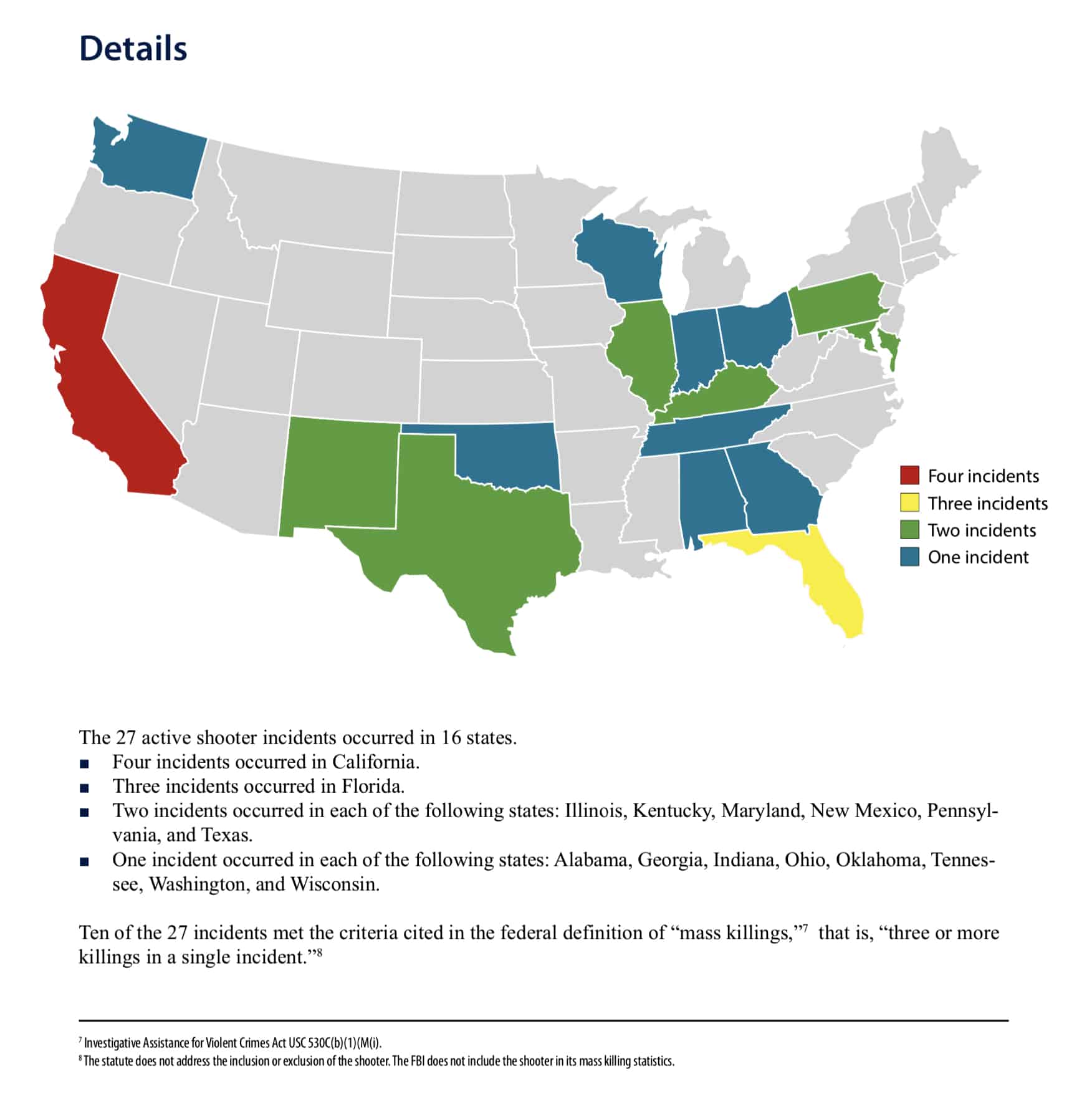 The FBI designated 27 shootings in 2018 as active shooter incidents.

The shooters’ ages continued to span the decades. The youngest was 13; the oldest was 64.

One shooter—a student—deployed improvised explosive devices and Molotov cocktails, but they did not detonate or combust.

As in past years, citizens were faced with split-second, life-and-death decisions. In 2018, citizens risked their lives to safely and successfully end the shootings in five of the 27 active shooter incidents. They saved many lives.

Given this reality, the FBI said it is vital that citizens be afforded training, so they understand the risks they face and the options they have available when active shooter incidents are unfolding.

Key Findings of the FBI’s June 2018 Report: A Study of Pre-Attack Behaviors of Active Shooters in the United States Between 2000 and 2013

1. The 63 active shooters studied were not uniform in any way—so they could be easily identified before attacking—based on demographics alone.

3. Most active shooters acquired their firearms legally. Only a very small percent obtained a gun illegally.

5. These shooters were typically experiencing multiple stressors (an average of 3.6 separate stressors) in the year before they attacked.

6. On average, each active shooter displayed four to five concerning behaviors over time that were observable to others surrounding each shooter. The most often occurring concerning-behaviors regarded the shooter’s mental health, problematic interpersonal interactions, and leakage of violent intent.

9. In those cases where the shooter’s primary grievance could be identified, the most common grievances were connected to an adverse interpersonal or employment action against the shooter (49 percent).

10. In 64 percent of the cases, at least one victim was specifically targeted by the active shooter.