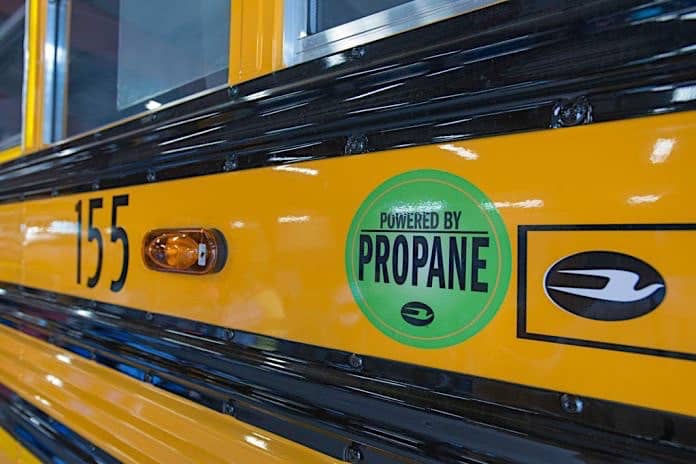 Editor’s Note: This article is the second of a three-part series focusing on alternative fuel options for school districts.

While electricity is dominating industry conversations for its zero emissions and low maintenance costs, propane has already proven its reliability as a less expensive option to diesel while still providing low emissions. Not to mention the upfront cost of the vehicle is significantly less than when compared to electric.

Propane is referred to as liquefied petroleum gas and is a byproduct of natural gas processing and petroleum refining. Propane was only one of the fuels discussed during the virtual Green Bus Summit April 20-22.

Related: Selecting the Fuel that Makes Cents for You: Electric

On day one of conference, Tucker Perkins, president and CEO of the Propane Education and Research Council, broke down the five benefits of propane vehicles. They consist of availability, clean emissions, cost, range, operability in any weather condition.

He also cited a study that found propane reduces oxides of nitrogen by 96 percent compared to diesel engines.

Fulton County Schools in Atlanta has the most experience operating propane-powered school buses, as it owns the largest propane Blue Bird fleet in the country. Trey Stow, the director of transportation for the district, said during the virtual Green Bus Summit that Fulton County is currently operating 443 propane buses.

Stow noted that while it’s becoming harder to find good technicians to work on school buses, switching to propane made hiring easier.

He explained that if technicians can work on a regular gasoline engine, then they can handle propane vehicles all the same. He noted that Fulton County includes a specific amount of training hours for mechanics provided by Blue Bird, as stipulated in the bus purchasing contract. Stow said the training is tailored to the needs of his fleet for that particular year.

Meanwhile, Birmingham City Schools in Alabama is operating 28 propane school buses for the past three years and is in the process of replacing its remaining diesel buses with propane. Director of Transportation Casey Jo Foster said because of the federal tax credit rebate that was extended last year, operating propane school buses is making the district money.

He explained that propane is achieving 4.2 miles per gallon around Birmingham City, and the district is also receiving a rebate from the federal government at $0.37 per gallon. He added that because he receives transportation reimbursement at a fixed amount, the fuel cost is inconsequential. He anticipates a $1.1 million budget surplus when his entire fleet is running propane on all 98 routes.

While the purchase price of a propane bus is $5,000 more than a comparable diesel bus, Foster noted that it’s an incremental price he’s willing to pay for the increased benefits.

Amy Rosa, director of transportation at Wa-Nee Community Schools in Nappanee, Indiana, is also operating eight propane school buses and is expecting a delivery of three more next month. She noted that even in negative 15-degree temperatures (negative 35 with wind chill), the buses are starting up perfectly. She added that a propane bus gives her more confidence on winter mornings than diesel buses ever have.

She explained that she does have a temporary above-ground propane fueling tank on site that holds around 3,000 gallons. Wa-Nee does have land available for an in-ground tank, and Rosa is in the process of developing a new parking lot and a propane fueling area.

Foster noted that he, too, is looking into an on-site fueling system, which would include an expanded parking facility and a bus washing system. Currently, however, he noted that fueling is performed offsite. While he said that there is some potential employee time loss because of the fuel pumps on site, he hasn’t calculated the driver travel time and noted that its inconvenience has yet to negatively impact the district.

Both Foster and Rosa shared that vehicle maintenance has greatly decreased compared to diesel. Foster noted that with no DPF filters, the savings in labor and parts are adding up. He explained that because his buses are replaced every 10 years, the district doesn’t expect major work to be necessary on the vehicles.

Rosa noted that Wa-Nee is saving an average of $225 per vehicle per bus service, adding that buses are serviced about twice a year. She added that while the initial cost of a propane vehicle is higher than diesel by around $8,000, the decreased maintenance costs make up for the difference.

With another round of Volkswagen Mitigation Trust Funds starting to become available, Rosa advised looking at the engine age when determining if district buses are able to qualify, not the model year. Rosa added that Wa-Nee is receiving $25,000 through the grant program to remove old diesel engines off the road and replace them with propane.

When trying to convince the district administration or school board into the benefits of propane, Rosa advised sharing case studies from successful school districts and all the calculated savings.

Foster noted that while interviewing for his current position at Birmingham City Schools, he referenced his experience with propane at the Texas school district he was at. He discussed the feasibility of adding propane school buses in Alabama.

He noted that if propane is a viable option for school districts, he advised making the transition early. He added that traveling long distances might be an issue at first, but changes are continuously being made and extended fuel tanks are now an option.

“I think propane will be the way to go in the future,” Foster said. “There will be different taxes on diesel that will increase. I think propane is a good viable option, as it’s not a large increase in price. Price of propane is historically flat.”

He concluded that while he’s not dismissing electric-vehicle technology, the immediate solution for his fleet is propane.