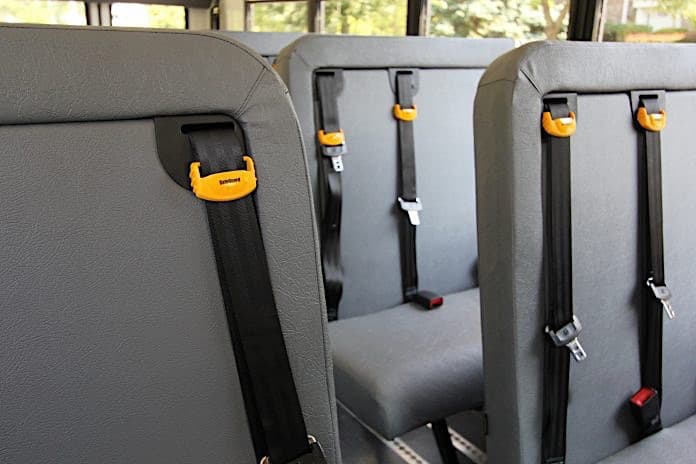 As student transportation directors across Iowa are purchasing school buses with lap/shoulder seatbelts to comply with a new state law, many are in favor of the safety restraints. Others, however, said there are additional steps to be taken to ensure student safety and compliance.

Iowa recently became the fifth state to require lap/shoulder seatbelts in school buses. However, Max Christensen of the Iowa Department of Education and Chris Darling of the Iowa Pupil Transportation Association (IPTA), said it wasn’t an easy road to travel toward a new state requirement.

Their 2019 National Association of State Directors of Pupil Transportation Services presentation in Washington, D.C., reviewed every step of the seatbelt legislation process, which started in 2005. Since then, 10 seatbelt bills were introduced in their state legislature, but all hit dead-ends, due to the necessary financial commitments, the pair reported.

But Christensen and Darling said they didn’t give up. In October 2016, Des Moines Public Schools begin a pilot program and installed 3-point seatbelts in two school buses. Since then, the state continued to work toward an installation mandate. In early 2019, the IPTA published a position paper in favor of the occupant restraint systems.

Then last September, following a school bus crash test during the ITPA summer conference that illustrated the limitations of compartmentalization without seatbelts, a state committee approved the final rule that requires school buses ordered on or after Oct. 2 to be equipped with lap/shoulder seatbelts.

Daniel Schultz, director of transportation at Southeast Polk Community School District, said it was about time a decision was made. He said the state has been “wishy-washy” for the past 15 years and he is happy it finally decided to make a decision.

“It used to be more about seatbelts save lives. Now, it’s about seatbelts reduce injuries, and those are two separate scenarios. And that’s what I believe made the decision a lot easier for people,” Schultz explained.

Schultz currently has 12 special-education route buses in his fleet that have lap/shoulder belts. He said many of the students who ride these buses have behavioral issues or otherwise have a hard time remaining seated.

In addition, he recently ordered seven new buses that are expected to arrive in August 2020. Four of those buses will be used for regular education transportation and the other three are special-education buses, he noted.

Over the next few years, Schultz plans to transition his entire fleet to the safety restraint systems. “Right now, we have an option of retrofitting a few. We haven’t made that decision. It’s going to be based on the responses we get from parents after we release the new buses,” Schultz said.

Schultz is not going to retrofit any bus that isn’t already “seatbelt-ready.” He has been ordering seatbelt-ready school buses for the past six to eight years, so all the retrofit will consist of is replacing the seatback.

Schultz hasn’t officially announced to his drivers who will be receiving the four new buses, as he didn’t want to see any arguments start over who received one. But he hinted that he will likely allocate two buses to senior drivers and the others to routes that are having issues. This will allow for a side-by-side comparison.

Schultz also reported the district is working on a mandated seatbelt usage policy, which the Iowa rule requires school districts to create. However, he believes the requirement will be a challenge for some students and parents, especially those that don’t comply with wearing the safety restraints.

“Our job is to get them to [school safely] as the number one priority,” Schultz explained. “But, if they don’t necessarily follow the rules, they don’t get to that education.”

Despite the challenges, Schultz said he welcomes the seatbelts.

“I do believe that it’s the step in the right direction, but I believe it’s the first in a series of steps they need to take because just putting them on buses doesn’t necessarily solve the problem,” Schultz shared. “There are some liability issues that need to be figured out.”

Meanwhile, Indianola Community School District approved its mandated usage policy earlier this month. Transportation Director Ron Swartz said it’s the school bus driver’s responsibility to tell the children one time to buckle up. If the students don’t comply, then it will be enforced through the school board disciplinary policy.

“I don’t think that it is going to be a real burden to the drivers,” Swartz observed. “As a whole, Indianola has good kids, so they are pretty compliant with it. Some of them wanted to know when they would get them. And the parents have been supportive of it.”

The district is in the process of retrofitting most of its fleet with the safety restraints and is expected to be finished by the end of March. The process started before Christmas break,  and 10 completed buses were already on the road as of this writing.

The day before retrofitted buses are assigned routes, Swartz will email all of the students’ parents to inform them about the seatbelts. Swartz and some members of his staff ride each route for the first several days, to ensure the students know how to properly buckle-up.

Out of the 34 buses in his fleet, Swartz said 25 will have the lap/shoulder seatbelts. The district chose not to retrofit the remaining nine because of their ages. The retrofit process is costing the district $220,000 total, for an average of $8,800 for each of the 25 buses.

In addition, having students in their seats would be a driver-recruitment benefit for him. “All of our buses are also equipped with at least three cameras inside,” Swartz said. “And to me, I think that would be a major recruiter for me. Because if I can get the kids to sit in their seats, buckled up with cameras, then the drivers can concentrate on just driving.”

Codie Kellen, director of transportation for LeMars Community Schools, said the state rule is going in the right direction, but there will be a learning curve with getting drivers trained.

“I think for the kids, it won’t be too big of an issue because as of 30 years ago, everyone is getting into their personal cars and putting seatbelts on,” Kellen said. “So, I don’t think it will be that much of a change.”

Kellen said his district ordered one 77-passenger bus that will be equipped with the safety restraints. It is scheduled to arrive in March or April. However, he has currently been using three 30-passenger buses that have both the 5-point integrated child seats and the 3-point lap/shoulder belts.

“I was always kind of neutral with seatbelts because I look at both sides and see both arguments. But to actually see it in person was quite the story,” Kellen said when recalling the IAPT crash last summer. “And they did some different crash analysis and showed some information that really tells the tales. I really do believe that seatbelts are the right choice for kids in the future—it’s just that there is a huge learning curve with it.”