HomeBlogsWhat Happens to Bullies When They Grow Up? Part 2: Childhood Bully
Blogs

What Happens to Bullies When They Grow Up? Part 2: Childhood Bully 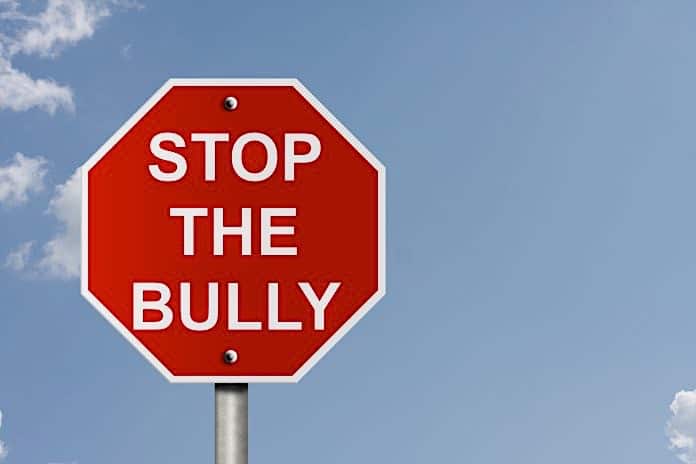 This is a three-part series about the taboo side of bullying, which has not been given much publicity. Follow me on a journey that is sure to leave you with disgust, anger, disbelief, and empowerment, as I uncover the truth behind the bully. This series will hit too close to home for many, as I have dealt with bullies in both my childhood and right here in the field of school transportation.

Before encountering the bullies in school transportation, I was a victim of bullying in my childhood. This is my story as told from a letter addressed to my childhood bully.

I grew up with you taunting me, belittling me, and threatening to meet me at the flagpole countless times from kindergarten through eighth grade. I was the quiet child that was often times placed directly next to you as to be your role model to soothe your disruptive and aggressive behavior. This bothered me as a child as your bullying continued to grow not only due to the proximity of our desks, but these occurrences happened year after year.

You see, I reported these occurrences to my parents as all victims of bullies are taught to do. My parents relayed the concerns to the teachers and later the principal. The teachers would listen to the concerns and soon after their discussion with my parents; I would be sitting by someone else until the next grade. This was the case year after year.

Even though I stopped sitting by you, you always found time to verbally assault and intimidate me. As many victims of bullying will tell you, I can attest that recess was the worst. I was never into sports, but to fit in during recess I would stand in the crowd to be picked for touch football. More often than not I was literally the last one picked.

Through the years, your aggression became more and more prominent, and less and less verbal with the purposeful tripping, elbows in the back while standing in line, etc. I would, in later grades, choose to be on safety patrol, particularly when school let out to occupy the time so I could have an excuse from meeting you at the flagpole to get what’s coming to me for snitching on you.

My short stature fueled the derogatory names and taunts in which you would refer to me. As a child, I felt like Alex Libby from the PBS documentary, “Bully.” The young version of me related to Alex’s comment, “I’m starting to think that I don’t feel anything anymore.”  The numbness to the assaults occurred with me as well. The start of seventh grade was the most numbing for me, as I shut down and refrained from discussing my daily anxieties with my parents due to the emptiness that I felt.

By the month of December during seventh grade, I was able to have a long heart to heart with my parents. I remember the rage and tears I felt as I painfully I relived my school days during the conversation. The rage came from the years of emotional abuse that you put me through nearly on a daily basis. The tears came from acknowledging that doing the right thing by telling the adults in my life wasn’t good enough to stop you.

I needed an escape. I needed empowering. Well, Santa must have listened to me more than I thought, because under the tree that very Christmas was a black EverLast punching bag and a red pair of boxing gloves.

Related: What Happens to Bullies When They Grow Up? Pt. 1

We installed the punching bag from the rafters of our garage, and your picture was scotch-taped to it. Truth be told, the tape did not hold up so well and your picture ended up being unrecognizable—useless to me, but I didn’t need your photo. All I needed was your emotional abuse to set me free during the late afternoons. I wore the red gloves down so much the padding would come loose from the stitches.

As the months progressed and summer came, I never bothered to get another pair of replacement gloves. Instead, I ended up using my bare fists which ended up looking like playing a game of bloody knuckles. It wasn’t until I started using the punching bag without the gloves, that I felt more alive.

Your bullying followed me to eighth grade. It was maddening, literally bullying from kindergarten to the year leading into high school. Lots of tears, lots of talks, lots of hours spent with the punching bag.

For you to comprehend what I’m about to tell you, you need to understand my family. We believe in second chances, we believe in talking through our problems first, we believe in finding every possible solution to the problem, and we believe that the school system failed us both.

I recall both my parents and myself being upset at the school system for letting your bullying continue year after year when the teachers and principal had documentation on the issue. It was only as an adult that I discovered that during your bad times you were receiving counseling to help with the issues you were having outside school.

Through this discovery, I learned that the small school was dealing with heavy issues such as grieving over multiple parent deaths in a short period of time and felonious crime involving a student. The school was wrapped up in their own bad times and the bullying was consistently overlooked as a lesser priority.

I put my jacket on one morning in eighth grade, and there in the pocket was a letter my Dad had written to me. It was the most incredible piece of literature I still have ever physically held in my hands.  A quick synopsis of the letter entailed that my parents were a lot more upset with the bullying than I ever knew.

My dad wrote to me ultimately giving me permission to take the lessons from the punching bag and apply them to real life circumstances. He told me that they would still love me and be there for me. The punishment that will incur was nothing to anything that I have already encountered. He told me to not throw the first punch, and to stand up for myself. I wondered if the solution lied in this letter. I reflected on this letter so much that morning.

Picture this: Coincidently or not, the day before eighth-grade pictures and you continued your terrible habits, and I received this note in my pocket. During morning class work there was obvious tension as you were reprimanded as usual by the teacher multiple times.

I was selected to go to the chalkboard with you to do head-to-head math problems and all the while you muttering filth from your mouth. I had it with your comments and did some sort of a comeback that you didn’t like. We ended up being dismissed from the chalkboard and sent off to morning recess where your everyday bullying continued.

The class resumed, and later when the rest of the class went to afternoon recess, I was questioned by the teacher for my comments I made earlier in the day. When I was dismissed and allowed to play, I headed off to recess where our classmates asked me why I had to stay in for a minute or two. I told them it was to snitch on you.

That’s when you became verbally aggressive and then shoved me, pretending to play touch football. I saw right through that load of garbage, and when your back was turned, I sucker-punched you in the back of the head. Punches were thrown surprisingly longer than I thought they might, considering parent volunteers were monitoring recess.

Sorry, Dad, technically I threw the first punch, but I deemed it justified. I wasn’t the only one. My punishment for fighting ended up being given a desk in the dark portion of the school basement, where I was to complete my regularly planned classroom assignments.

Not only did I get his permission that day, but I also had visitors I never expected. Teacher after teacher, came down to talk with me and whisper their “Congratulations to me,” it was absolutely unbelievable.

When the school bell rang, I was able to collect my things and exit the building. There at the flagpole were our classmates cheering for me. They ended up picking me up and chanting my name.

I was escorted like this to the end of the sidewalk to get in the car where my Dad was waiting for me. Our class cheering me on as my Dad drove almost as slow as they do in a funeral procession to take in the moment. With the windows unrolled, I heard the chants after I could no longer see the flagpole.

The following day was spent getting our pictures taken for the yearbook. I don’t remember much that day. I only have the pictures to reference. I become nostalgic from time to time and reflect back through the old yearbook.

It gives me mixed emotions seeing the shiner I gave you visible in the last grade school photo you have with me a few kids over smiling as happy as can be. You know what though, there’s an odd silver lining to our relationship after the incident occurred. When I take our eighth-grade yearbook and flip to the autograph section, I’m stilled stunned every time I read the words you wrote to me. 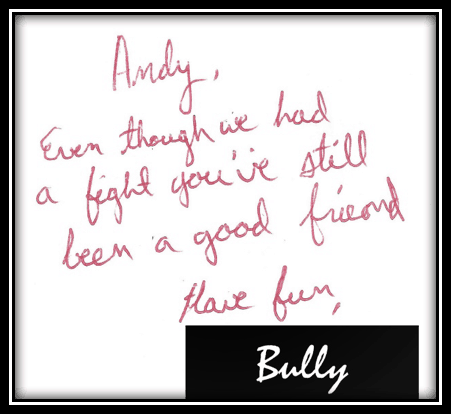 I want to leave you a few words for you to remember too. “I finally forgive you.”

The moral of the story is that the system is flawed. Sometimes you quite literally need to take matters into your own hands. You may do things that go against your beliefs, but you have to do the necessary sometimes in order to prevent the problem from reoccurring.

Not everyone gets an apology from the bullies in their lives, I was just lucky enough to have a bully that understood his wrongdoings. Bullies grow up and continue their path of bullying unless they are stopped during their childhood.

Listen to your children, confront the school, and if necessary confront the bully. We all make mistakes. Some of them bigger than others, but it’s critical we learn that bullies grow up too.

Letting childhood bullies continue their path, only leads to further bullying as they grow up, as they hold jobs and awards in school transportation. See what I mean in the upcoming and final post to this series.

Editor’s Note: Andrew Gardner combines his experience as a husband and father with the pupil transportation industry along with his previous employment in marketing and sales with a Fortune 500 company. He may be contacted via email.