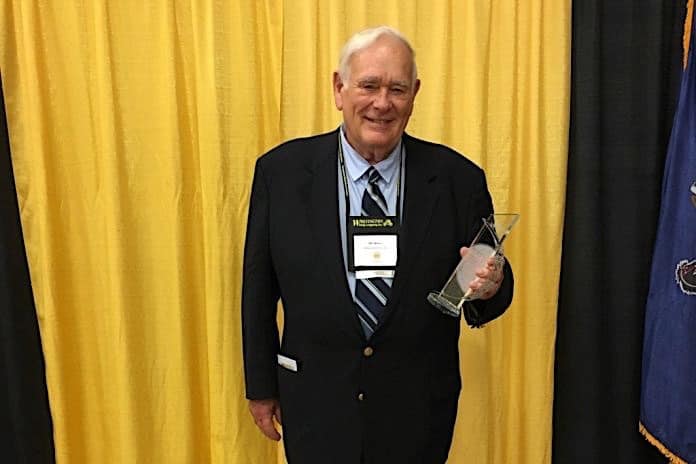 The event was held on June 24-26 at the Seven Springs Mountain Resort in Champion, Pa. Moore was joined by his wife, Lonnie, and their family. Moore School Bus is located in Apollo, Pa. and has been transporting students since 1947.

The Bus Stops Here Award is presented to a person the PSBA Executive Committee feels has made a significant contribution to the association. The award states that this person has always upheld the ideals of PSBA, and has worked to fulfill the safety, education and advocacy missions of PSBA.

Upon nomination, the executive committee affirms that the nominee is respected and held out as a role model among their peers, school administration and members of the community, has upheld the core values of PSBA, and meaningfully contributed to its mission.

Moore has been a member of PSBA since the association’s inception in 1980. The association said he has served in many roles as an association board member and officer before his election as PSBA president, which he held in 1996-98. Even after leaving the presidency, Moore has remained active in the association, as an ex-officio member of the board of directors and as a member of several PSBA committees.

PSBA Past-President Randy Smith nominated Moore for this award. “Bill was the president of the association through a difficult time period in the 1990s. He has stayed active ever since, serving on numerous committees of the PSBA. He has supported the PSBA Safety Competition held each year in State College, serving as a judge on the railroad crossing. I consider him a good friend and mentor, and was proud to nominate him for the Bus Stops Here Award.”

The National Association of State Directors of Pupil Transportation Services announced that it canceled this year’s annual conference scheduled for this fall because of...
Read more
Event News

COVID-19 has wreaked havoc on industry events this year, with the widespread cancellation of state and national conferences and trade shows. But School Transportation...
Read more
Event News

As the world turns during the ongoing COVID-19 crisis, the STN EXPO Reno Conference & Trade Show has been rescheduled again for the first...
Read more
Event News