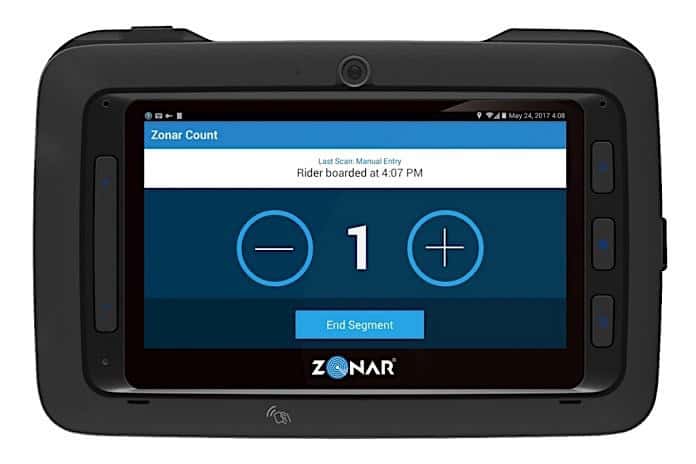 Zonar has released a new app for its vehicle tablets that allow school bus drivers to count student passengers as they board and egress the vehicle at stops.

It also eliminates the need for student tracking paperwork necessary to track and submit information on students with special needs, the company added.

The Count will be on display at the STN EXPO Trade Show on July 11 in Reno, Nevada, a company spokesman confirmed on Tuesday, a day after the app was announced in a press release. He added that Count becomes a more robust solution with the use of the Z Pass student tracking solution as it allows fleet managers to see exactly where the students got on or off the bus.

The app can only be used when the school bus is not in motion and the driver “wakes up” the tablet. Drivers use the touch screen to conduct the count and transmit the data to a secure database for immediate access through Zonar’s Ground Traffic Control.

“We built Zonar Count to help managers better understand how their fleets perform so they could make their vehicles safer and routes more efficient for drivers and passengers,” said H. Kevin Mest, Sr. VP/GM of passenger services at Zonar. “Operations managers would know how many students were actually riding a route in comparison to how many were assigned, providing a key productivity metric to right size fleets to actual load counts and accurately capturing state ridership information for state reporting.”

The Los Angeles County Office of Education unveiled recommendations to all 80 local school districts on how to plan for reopening classrooms and school...
Read more
Safety

The Centers for Disease Control and Prevention (CDC) issued a new set of recommendations that details a plan for reopening America, including regulations that...
Read more
Safety

The school bus industry is coming up with solutions to better prepare transportation directors for the new normal of sanitizing their fleets for the...
Read more
Industry Releases

The National Transportation Safety Board discussed in a webinar on Wednesday the factors leading up to the fatal Rochester, Indiana, school bus crash, and...
Read more