Petermann Partners with American Red Cross for ‘A Cause for Alarms: Mega Blitz 2017’ 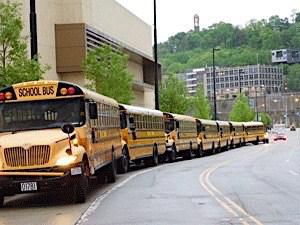 CINCINNATI — Petermann Bus, a leading provider in student transportation, partnered with the Greater Cincinnati Chapter of the American Red Cross for the “A Cause for Alarms: Mega Blitz 2017” event.

More than 600 volunteers were transported by Petermann to nine neighborhoods in the greater Cincinnati area, installing about 1,000 smoke alarms for families in need. Petermann donated 12 buses and driver time to transport the American Red Cross staff and volunteers.

“Smoke alarms—especially when combined with an escape plan—really do save lives,” said Trish Smitson, chief executive officer for American Red Cross. “We’re pleased to have partnered with such a safe, reliable company as Petermann Bus to transport volunteers, who made this event a success.”

“Petermann is built on five core values: safety, people, customer, community and excellence. Partnering with the American Red Cross for the A Cause for Alarms event embodies all that we stand for,” said James Ring, region manager for Petermann. “Their efforts are truly remarkable, and we’re proud we were able to partner with them for this event.”