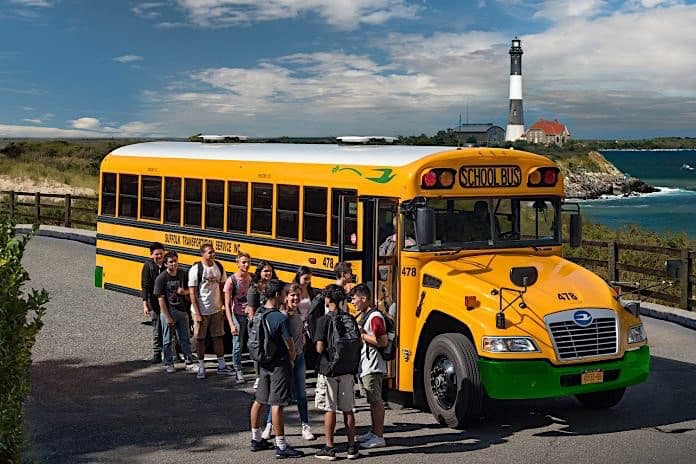 Blue Bird provided an update on its national tour of it’s new zero-emission electric school bus options, which student transporters in six states have test driven, even as new orders come in to the Fort Valley, Georgia-based company.

The Type D All American Electric first stopped in California in January and has since visited Nevada, Arizona, Colorado, Ohio and New York. It is next headed to Florida and Ontario Canada.

“After the outstanding response we saw in California, Blue Bird is excited to showcase our electric school buses to customers and drivers across North America, not as concept vehicles, but as a preview of our production buses later this fall,” said Phil Horlock, president and CEO of Blue Bird. “As both the pioneer and undisputed leader in alternative fuels, we are delighted to expand our ‘green’ product offering by adding electric bus options in both Type C and D body styles.”

Blue Bird is partnering with ADOMANI and EDI to manufacture the electric powertrains for both buses.

Horlock added that Blue Bird manufacturers the only electric school buses that are currently eligible for the California Hybrid and Zero-Emission Truck and Bus Voucher (HVIP), and New York Truck Voucher Incentive Program grants that pay for the incremental purchase costs.

“That’s great news for our customers—and following our Ride & Drives in California, we are already receiving orders from school districts,” Horlock added.

Deliveries are set to begin by this summer or early fall.

The Blue Bird electric buses are expected to provide 100-120 miles in range from a single charge, and feature a seven-year warranty on the 160kWh lithium-ion battery. The buses will also include telematics, remote monitoring options and high-powered, vehicle-to-grid capabilities by next year.

The All American Electric and Vision Electric also comply with the Colorado Racking and Kentucky Pole Test certification standards for crash worthiness.

South Carolina State Superintendent of Education Molly Spearman announced the approval of a total of 67 school district reopening plans at this report, as...
Read more