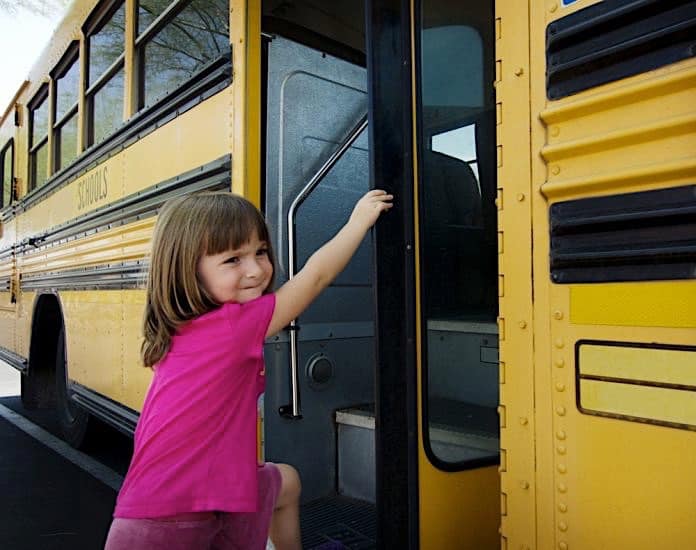 Advice and safety products are proposed to help keep students safe in the loading and unloading zones of their school buses, also known as the Danger Zone.

The annual loading and unloading zone survey performed for the 2016-2017 school year by the Kansas Department of Education and the National Association of State Directors of Pupil Transportation Services, found that the number of student deaths in the school bus danger zone doubled from the two previous school years. One of the fatalities was a nine-year-old girl who was caught in the doors of her bus, dragged and run over.

A January 2016 study performed by Kathleen Furneaux, executive director of the Pupil Transportation Safety Institute, and Peter Lawrence, director of transportation for Fairport Central School District in upstate New York, revealed that there were 31 instances of students being stuck in their school bus door between 2004 and 2015. Two students were killed.

Furneaux and Lawrence said that a possible solution was rethinking the placement of the switch that drivers use to open and close the loading door. They pointed out that, in most school buses, drivers must turn away from the door and the disembarking students to operate it. “Nevertheless, at the moment the student is exiting the bus, nothing is more important than making sure the service door is cleared and the student has moved no less than 15 feet away from the bus before pulling back into the flow of traffic,” they observed.

Bus equipment company Mayser USA, Inc. recently introduced another solution. The company’s electric safety edge product fits on the edges of the school bus loading doors and will automatically reopen them if an obstruction prevents them from closing all the way. The product can also be integrated with audio and visual notifications. This safety edge is in use on public transportation vehicles across North America and Europe, according to Scott Behr, a sales engineer for Mayser.

Ohio is the first state to allow such safety edges on school bus doors. “The device must detect both pinch and drag potentials, and must notify the operator visually and audibly,” read the specifications, which were updated last month.

“When I presented it to Ohio, we were planning on offering an aftermarket kit that could be installed but decided it might make better sense to work with the (vehicle) OEMs and let them decide if they want to only offer it on new buses or if they would like to offer a retrofit kit for the existing buses,” explained Behr.

To that end, Behr said that Mayser had presented its safety edge to several school bus manufacturers, including Blue Bird, IC Bus, Thomas Built Bus and Lion Bus, and that at least one was “actively engaged” with them.

He added that the product is ready for use in some states, such as Texas, which only have certain minimum standards, but allow additional safety equipment without the need for the specifications to be updated. Marisa Weisinger, executive secretary of the Texas Association for Pupil Transportation, confirmed this aspect of the state’s specifications.

Behr, whose mother was a school bus driver, driver trainer and transportation supervisor, said that he is on a journey “to make people aware that there is a solution to protect these children and their bus drivers from things like children being pinched, entrapped or dragged.”

He noted a 1997 incident in which a teenage boy was dragged and crushed to death when his jacket was caught in the bus door’s handrail, which resulted in a $14 million settlement.

“My guess is you could have equipped every school bus in multiple states for that amount of money and saved a child’s life, rather than pay it out for a loss of life,” said Behr.

“I think that there are pros and cons of the system, but believe it could help prevent an injury or death if a student would get caught in the door,” he told STN. He added that he would need to see some product and installation prices before deciding if it was cost-effective.