RENO, Nev. – The first educational session of the Green Bus Summit featured must-know lessons from school district transportation leaders who are on the road toward electrifying their bus fleets.

“The diesel school bus is the pay phone of this era,” declared Nate Baguio, senior vice president of commercial development for title sponsor The Lion Electric Co. “This is a turning point for the yellow school bus. Jump on the grant dollars, get your infrastructure installed because this is the new way to fuel your school buses.”

The Sunday panel was led by Rick Lee, director of eastern U.S. school bus sales for Lion. The panelists came from districts of varying sizes and locations.

“There’s a lot of thought and forefront planning that goes into bringing electric buses to your district,” said Schrader. She added that cultivating relationships with utility providers is an important step that should begin early in the process and continue through the years.

Cajon Valley USD is partnered with Lion, Nuvve and its local utility provider for a pilot project on vehicle-to-grid (V2G) technology. This technology moves fast, necessitating a transportation director to stay abreast of it while also keeping focused on the core mission of serving kids, Brodwolf noted. 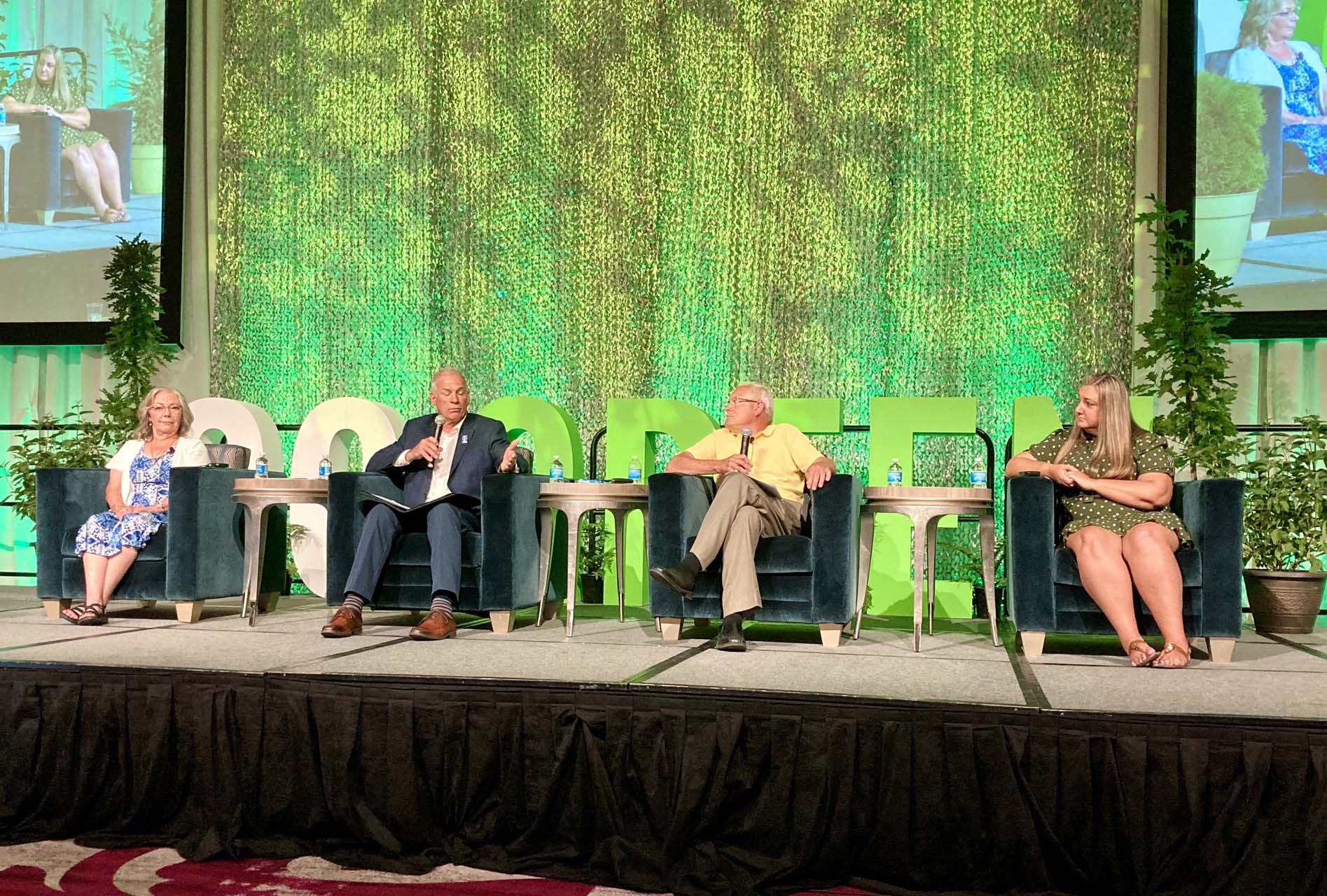 Since ESBs are typically three times the purchase cost of a diesel bus, securing funds is key to electrification, Lee pointed out.

Francis said he was able to secure 85-percent funding. He added that the district chose AC, or “slow” chargers due to the cost of DC chargers.

The federal Diesel Emissions Reduction Act and the California Hybrid and Zero-Emission Truck and Bus Voucher Incentive Project (HVIP) funds covered most of the cost of Cajon Valley USD’s first five electric buses and the next two were acquired with Carl Moyer funds. Infrastructure was covered by the utility and Nuvve provided the V2G fast chargers at no cost.

Lee added that Lion understands that transportation directors have a lot on their plates, so it offers a grant team to help find funds and complete applications.

Schrader said she is a big believer in electrification and changing the way school transportation looks in the future. The $2.5 billion available over the next five years for zero-emissions school buses through the Clean School Bus Program gives this chance to small districts who face budgetary challenges, she noted.

Brodwolf shared that while her district won’t be eligible for the funds for several years because of its bus replacement cycle, it is expanding charging infrastructure and considering future opportunities to stay relevant and be a part of change.

Francis said a key point was that his school board and superintendent were on board even though the area has a large history of oil production.

In answer to Lee’s question on driver response, Schrader said that senior drivers were reticent at first but are learning to appreciate ESBs, which students also respond better to. “You can put students on a diesel bus and on an electric bus and you will have a different outcome,” she proclaimed.

Brodwolf said she also faced pushback, so she got influential drivers on board with the idea first, let drivers create their own handbooks, and required all drivers to be trained on ESBs. Once the familiarity and learning curve on regenerative braking had passed, she reported that most drivers came to appreciate the way the buses handle, how quiet they are, and how they are part of improving the community as a whole.

Lee remarked that one transportation director realized such significant cost savings through electric buses that it helped improve his driver pay issues.

Francis said his drivers enjoyed being a part of the pilot when they realized they could now hear the students talking because ESBs operate with little noise. They also learned they could avoid overheating diesel engines in the summer, employ the regenerative braking system which works well even in winter with no slippage on wet roads, and enjoy wider aisles. Plus, they’re fun to drive, he said.

Francis shared that his cost per mile remained about the same as with diesel since the buses use regular heaters in cold weather. But he confirmed that with no engine and so few mechanical parts to deal with, electric buses were cheaper to maintain. He added that Lion’s maintenance department has been helpful in customer service and parts shipping.

Lee made the point that bus maintenance is getting more connected and technological than old days when simply tools were required. Schrader agreed, saying that she had to take it a step at a time with her lead technician, an industry veteran who was used to diesel buses. It was still easier, she related, since ESBs have significantly fewer moving parts as well as no oil changes, DEF filters, or the like.

Brodwolf shared that chargers with V2G technology are more expensive but can eventually provide income. She recommended working with local utilities for off-peak charging and rebates.

“I find it exciting to see how much money I’m saving with electric school buses,” Schrader declared. She said she regularly pulls reports for the school board that revealed she saved $50,000 last year, half from fuel costs. She recounted an ESB run that cost her 13 cents and would’ve cost about $25 dollars worth of diesel fuel. And traditional fuel isn’t getting any cheaper, both Brodwolf and Schrader noted.

Francis reported no issues with traction, power or performance, even at temperatures as low as -22 degrees and difficult roads with gravel, snow, mud, or hills.

An artist from The Ink Factory created the below poster incorporating thoughts from this session. 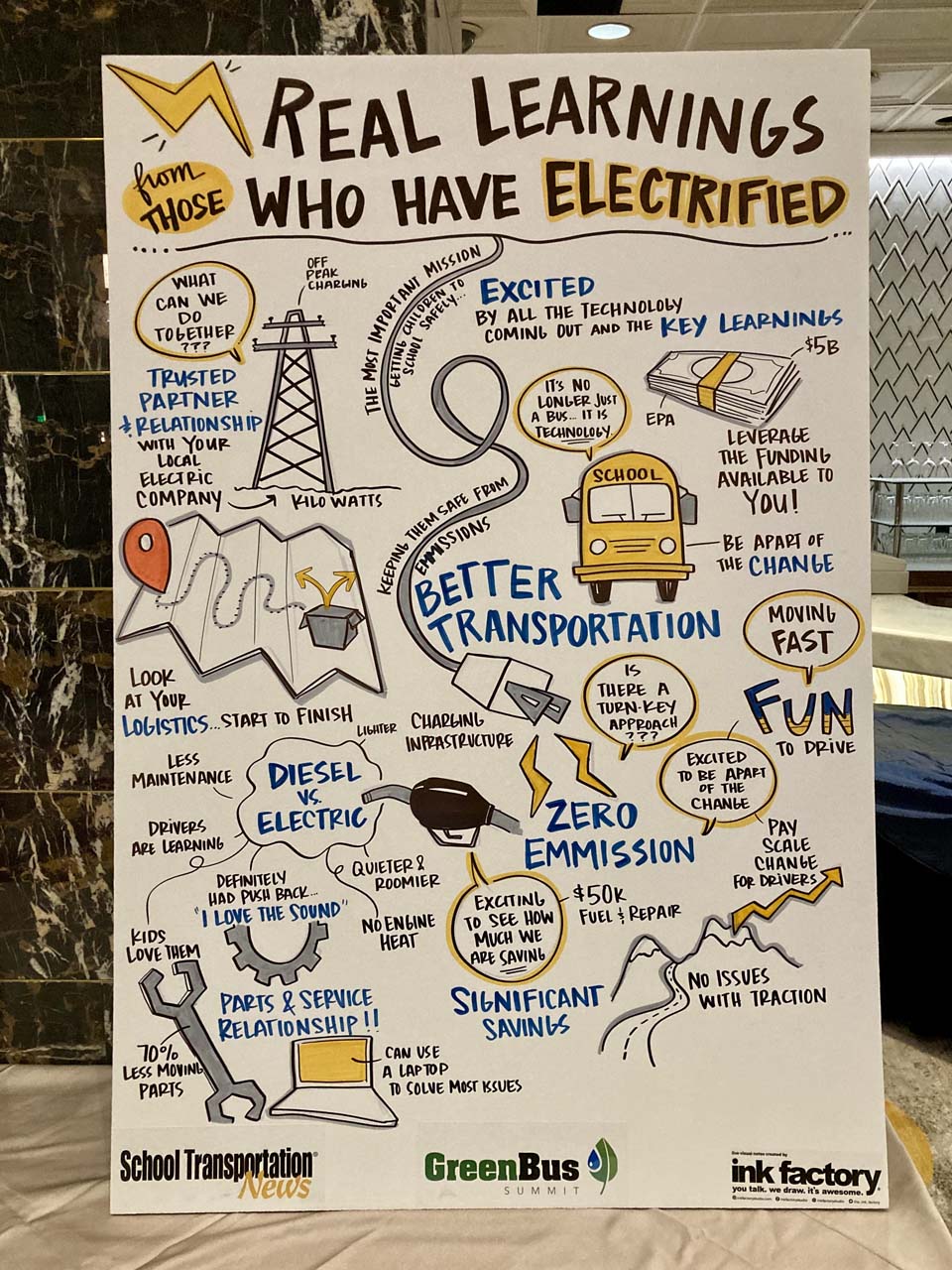