Adrenaline junkie Linda Benner recently celebrated 40 years of being a school bus driver. Yet compared to what she’s used to operating, a school bus is a piece of a cake.

Benner, 61, has ridden motorcycles, flown a glider solo, and even drove a race car at the North Alabama Speedway.

She originally had an office job upon graduating, as she went through secretarial job training in high school, but she admitted that she often found herself falling asleep at the computer. Benner said she then went to an employment office, where she was introduced to different job opportunities, finally selecting a school bus driver at age 21.

“I like to drive different things,” Benner said, adding that she enjoys when her car breaks down because she gets to navigate a rental car for a couple of days.

Since 1980, Benner has driven for Bethlehem Area School District in Pennsylvania. She shared she already knew how to drive a manual shift, which was what the school buses were back then. The only required training was in the classroom and behind the wheel, which she noted was less detailed than it is today. She said commercial driver licenses weren’t required, either, not until 1986.

She said one of her first school buses was a stick shift without power steering, adding that she had to avoid some areas due to the limited turning radius. Other times, she just accepted the fact that she was going to hit the curb.

“[The new buses] are like Cadillacs compared to the old buses,” she observed.

Changes Throughout her Career

Benner said there has been a huge advancement in the way routing operates, since she first started. When she first started driving, she said bus drivers were merely given the addresses of those on their routes, and they could only glance at a map located at the bus depot before leaving. She explained that most of the time, school bus drivers asked the kids on their bus how to get to the next house.

But times have changed, and she said now kids don’t know where they are, as they spend most of their time looking down at their phones.

Benner said overall, technology has improved the school bus ride as well as help to exonerate the driver when they are excused of something. She said when video cameras were first introduced at her district, she didn’t like the idea of being watched all the time. But with the systems actually in practice, she understands their importance.

She said the cameras do have downfalls, as they sometimes don’t capture everything that happens on or around the bus. Yet she shared that having the cameras in place helped her in instances where children made up allegations against her.

She noted that while BASD doesn’t currently have tablets on its buses, she would be interested in the technology to help her match names to the faces of her students. Required facemasks have made it more difficult for her to tell who the students are.

Tablets would also be able to integrate into student ID cards, she said, which students could use to get on and off the bus.

She shared that while some older drivers may be hesitant about the new technology available, a slower integration period would be the most effective for districts considering new advancements, so drivers know how to use the solutions, she advised. 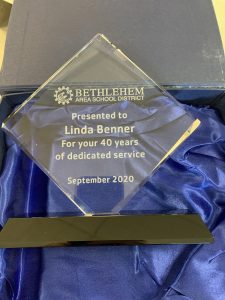 Benner said she loves driving, so the same route every day doesn’t bother her. She added she prefers when the bus is half empty, as it gives her more opportunities to interact and talk with the students on board, adding that it’s easier to control behavior with fewer kids.

Benner said she used to drive students with special needs for the first 10 years of her career. Those are still some of her fondest memories, as the students really touched her heart.

She said one of her most freighting moments as a driver was when she was sitting in traffic on the highway and an 18-wheeler clipped the back of her school bus. She said students were injured and it was probably the most challenging experience she’s had in the past 40 years of being a school bus driver.

Another moment that stands out in Benner’s career. She was picking up a student and as she shifted into drive the shifter fell off. She said she luckily had a radio and called for a mechanic to come and fix it. But as she waited, she had to keep her foot on the brake so the bus wouldn’t roll away. She added, laughing, that later she realized she should have just turned off the ignition.

Benner advised up-and-coming drivers to listen to the advice of as many as people possible but to also take all the input with a grain of salt. She said everyone is going to give good advice, but in the end, it’s just one school bus driver, the bus, and the kids out there on the road. She added there will be times one has to think and make a decision on their own.

“You can do it,” she concluded.

There’s No Such Thing As A Free Electric School Bus, Webinar Says

The Power of a Friendship in Pupil Transportation