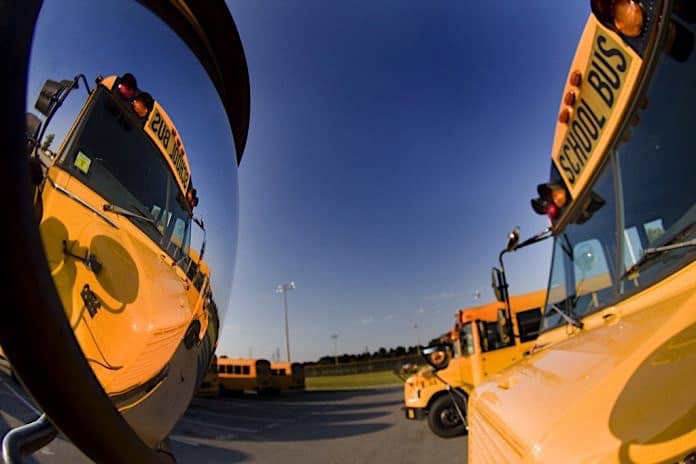 Safety Vision later introduced and sold a version of a mirror monitor that Rosco contends infringed on at least five of its patents. Rosco responded with an infringement lawsuit against Safety Vision and its supplier.

U.S. Patent No. 8,624,716, Camera System for large vehicles issued in January 2014 states a “vehicle-borne, camera-based observation system for monitoring areas adjacent a vehicle or passenger vehicle, such as a bus or school bus, is disclosed, to provide safer operation for passersby, including for children, and driver convenience.” The patent included systems for several cameras and monitors in a driver’s area displaying all fields of view from the camera. Night vision, automatic tracking, and illumination systems are also provided.

U.S. Patent No. 9,215,429, Mirror monitor using two levels of reflectivity, was issued in December 2015. The patent states a rear-view mirror, modular monitor system and a method including an interior mirror that embeds a modular monitor behind see-through mirror glass. The system includes multiple cameras inside as well as outside the vehicle providing the driver a view as to what is happening.

While Rosco representatives could not provide information on when Safety Vision released its mirror monitoring system or when the lawsuit was filed, both parties have amicably settled the patent infringement lawsuit. Safety Vision agreed to purchase a license to settle the lawsuit and to continue selling Safety Vision branded products. Safety Vision and its suppliers have agreed not to contest or assist others in contesting the validity or enforceability of the Rosco Patents.

“Rosco is pleased to add Safety Vision as [a] licensee of an important part of Rosco’s patent portfolio, thereby validating Rosco’s technological research and development patents,” Ben Englander, CEO of Rosco, stated. “Rosco continues to innovate in all aspects of its business and places a high priority on intellectual property rights of all companies and parties, while also expecting mutual consideration for IP developed by Rosco.”

Peter Plate, vice president of sales and marketing for Rosco, told School Transportation News that the company continues to innovate with recently introduced offerings to the MOR-Vision family, such as: