Sachem Central School District, one of the largest districts on Long Island as well as among suburban school districts in New York state, has more than 12,000 students attending one of 15 schools (10 elementary schools, three middle schools and two high schools).

Students ride buses either owned and run by the district and using Transfinder solutions, or buses operated by a contractor that does not.

But Assistant Transportation Supervisor Joan Uettwiller often will rework a route created by the contractor and use Transfinder’s routing solution, Routefinder, to build a better route.

Uetwiller knows a thing or two about routing. She’s been using Routefinder since 2007. By the time she joined Sachem Central School district, she said the district had already been using the routing software extensively. In fact, Sachem started using Routefinder back in 2002.

What were they thinking?

“Sometimes they route things at the contractor’s office, and I’ll take it and do it myself and give it back to them, so they are running it the way we are,” Uettwiller said. 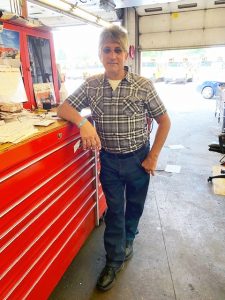 “When she puts the route in, then she sees how they’re dragging the kids all over the place,” Cervone said, noting he’ll hear his colleague say, “I don’t want them doing this.”

Uetwiller playfully hit her forehead with the palm of her hand as she shared the story, saying: “What were they thinking?” Sometimes she’ll even have a representative from the contractor’s office come to the district to see the changes she made and they quickly see why her approach with Transfinder makes more sense.

Cervone, who is entering his fourth year with the district, praised his staff for implementing the technology so skillfully so he can continue looking at other technology he wants to implement, such as attendance. In addition to Routefinder, Sachem has Infofinder i for field trips and Servicefinder for inventory, which he said was a mess before implementing the software solution.

“The fact that I don’t have to do the day-to-day Transfinder stuff frees me up to look into other technology,” he said, like Wayfinder, which he is considering for attendance. Since requiring drivers to take attendance in the midst of the pandemic, Cervone believes it make sense to continue the practice.

Cervone said he and his staff likes the user-friendly aspect of Transfinder’s solutions.

He noted how one new senior clerk in the department taught herself how to use Routefinder and is pushing the district to use the solution to its fullest potential, something he said the district wasn’t doing before.

Cervone said he came to the district from BOCES and after a brief stint with a contractor. But in those positions, he wasn’t directly involved with transportation. But the combination of a great team working with a great solution, Transfinder technology, made the transition a smooth one.

He noted that Transfinder University, Transfinder’s extensive three-day workshop that were held in person before COVID, also paid off.

“I started simple, geocoding every day and then making stop adjustments,” Cervone said. “You have a lot of good tutorials you can watch. I watched two people in my office train themselves just by watching videos and tutorials and then trying it. It seems to be an easy program.”

Cervone said Routefinder made coping with COVID routes easy as the district switched to alternating A-B days for students in the higher grades while having elementary school students attend in-person every day.

“We had a very successful year,” he said.

In Uetwiller’s words, she shouldn’t change much when it comes to Routefinder and the routes her team has created with the software.

“Little by little we have perfected it to the point where we don’t even have to touch it anymore,” she said. “We’re so efficient right now that it’s just right.”

It’s how she feels about Transfinder support team, too.

“Anything we need they are right on it,” Uetwiller said. “Transfinder works for us. It works perfectly for us.”

“Everything is well,” he said. “You guys call back, you always help us, you know what you’re talking about.”