The life of a school bus driver is never considered easy, especially when training is lacking. School bus drivers are more often than not the only adult among a bus-full of children. Their jobs require them to watch the road as well as to be aware of the students behind them.

Following the announcement of an $810,000 grant from the state of Michigan to complete Proactive Response Training for School Bus Drivers statewide by next fall, one Michigan driver shared how important this training would have been to her nearly a quarter of a century ago when her school bus was involved in an attempted hijacking.

She recently shared her story with School Transportation News.

On Sept. 19, 1996, Estelle Graves’ life changed forever. That morning, she was transporting special education students to Jackson County Intermediate School District, located about halfway between Detroit and Kalamazoo. She had been a school bus driver since 1981, when she was first hired full-time and knew the route well. She explained she only had three children on board that morning compared to the usual seven, as several of the other students didn’t need transportation that day.

One 11-year-old boy, Corey Marshall, was picked up last and sat in the seat right behind Graves. She recalled that Marshall’s seat selection was out of the ordinary but didn’t think anything further of it. She described Marshall as a larger boy around 5 feet, 8 inches tall and weighing around 170 pounds. She recalled that he had some kind of psychiatric disorder.

As she proceeded down the highway at 55 mph, she remembered having a short conversation with Corey before he suddenly pulled out a seven-inch knife and held it to her throat.

“He held the knife at my throat, and he applied more pressure,” Graves said. “And then when I got the bus stopped, he slid the knife across [my throat], but it did not cut it because it was very old and rusty. I was very, very fortunate.”

“It seemed like it took forever but then it was only a couple of minutes,” she continued. “I remember pulling that parking brake. And when he slid that knife across my throat, and we had a little confrontation there. I just stood up there. Literally praying to God, you know as I waited for my throat to choke out the blood.”

The next few moments transpired as Graves explained could only be a miracle. She was able to pull the bus over and fight back against Marshall, eventually gaining possession of the knife.

“[And] for some reason I just said, Corey, what else have you got? And he pulled another knife from behind his back and just handed it to me,” Graves recalled.

When asked why she thinks the boy handed her the second knife, Graves paused. She certainly has asked herself the same question over the years. She attributed his response to realizing that she was no pushover. She jokingly credited her “country background” or maybe her three younger brothers, who she was used to standing up to. Ultimately, she said it came down to trusting her instinct and fighting back.

She then radioed dispatch, which in turn called 911. Within minutes, police had surrounded her bus, and Marshall was soon escorted away in a police car. “I remember getting out of the bus and just leaning up against it and sliding down to the ground,” Graves said, adding she returned to the bus garage somewhat composed to brief her supervisor about what had happened.

As for Marshall’s intentions, Graves later found out during his sentencing that two of his older cousins had hijacked a taxicab and killed the driver the previous year. Graves said he possibly wanted to be like them.

It was while sitting in the courtroom that Graves also learned from the detective who interviewed Marshall that the boy had intended to rob, rape and kill her.

“He was then going to drive to Chicago because he had family there. He would let the other two boys off in Chicago. I remember sitting there with my husband and it was like I couldn’t breathe — this can’t be happening. It is something I pray will never happen to another driver.”

Graves is the type of bus driver like so many others who takes pride in her students. Prior to the incident, she would take them out to breakfast or let them study at her house if they had a big test the next day. She wanted her students to feel comfortable talking to her and she wanted to help them any way she could.

But she confessed she had no training whatsoever for the type of incident that Marshall perpetrated.

After 13 years of not stepping foot in a school bus again, she learned to face her fears and started driving for Jackson Public Schools. But not before taking a self-defense course, working with juveniles, and receiving years of counseling, she confessed.

“I had to be a survivor instead of a victim,” she said.

The first few days back on a school bus, she shadowed another driver until she said she felt comfortable enough getting behind the wheel. Yet she received no additional training on hijacking or active shooter incidents.

She said it was when she later started driving for Michigan Center Schools in Jackson County, that she was trained in handling escalated situations with parents, such as when to refuse to open bus loading doors.

But she still had no training on active shooter drills. Then she read a recent School Transportation News article about the training coming to Michigan this fall.

Following the attempted hijacking, Graves went before the school board at Jackson County Immediate School District and asked that aides be assigned to all special education buses. However, she said, one by one, her co-workers stood up to disagree.

Her supervisor at the time, Graves shared, also downplayed her incident, giving her a piece of paper to read to members of the media. She recalled her supervisor saying, “Thank God” that a larger incident had happened in another part of the county and Graves’ didn’t make national headlines.

“My husband came home that day, and I made him leave. I didn’t want anybody around me,” she recalled. “There were so many things going through my head. What did I do? Why did this kid do this to me? What could I had done differently?”

Graves said the new Michigan training will teach drivers how to handle a situation in which a student brings a weapon on board. “We’re all going to act differently, or our reactions are all going to be different,” she said. “But I like the idea that they’re going to give [bus drivers] some type of training to help them [react.]”

Though Michigan Center Schools is providing virtual learning until the second semester due to the local COVID-19 infection rate, Graves still reports to the transportation office to help with making exterior improvements to the building.

When she is transporting students, she tries to pay more attention to how the children are acting once on the bus. She strives to have a good rapport with her students and to understand their goals and daily experiences. She says she still does jump when a child comes up behind her while she’s driving, but she stays calm and tells the child that she’s “just getting old.”

“As a driver, you’re always on the defense as to what’s happening outside of your bus … but you need to have a defense in the back of your mind as to what could happen inside your bus,” Graves warned. “Did I ever think something like this could happen? No. … Just like we practice for fire drills and those kinds of things, just have something in the back of your head.”

Nowadays, she said she doesn’t wear earrings or anything to work that kids could use as a weapon against her or anybody else. “You’re going to have to trust your instincts, know your students,” she advised. “I think it’s important to know your kids. Don’t judge them, they get enough judgment from their peers. So just listen to them and know your students.”

She also works with the Jackson County Juvenile Correction Program, which opened after the attempted bus hijacking. She and a group of three other victims started a victim’s impact panel in 2001 to share their stories in an attempt to steer children in the right direction.

“We always try to tell them that you have choices,” Graves shared. “Yes, you made a bad choice, but that doesn’t define who you are. And you’ve been given a second chance. What do you want to do?”

As for the training criteria she hopes to see nationwide, she said school bus drivers need a basic self-defense course, possibly taught by the police department.

“I think it’s important to know your route, not just your stops but other streets and roads that you could take in case of an emergency,” Graves added. “Know your dead-ends and turn arounds. Where you could go for help, police or fire departments.”

She advised that if students with behavior problems have a one-on-one aide in school, there should be somebody on the school bus with them, too.

“I think a driver should think about the ‘What if’ and ‘What would I do?’ situations. We never know what could happen,” she explained.

Moreso, Graves said she learned and now tries to teach other drivers that there is more to driving a bus than operating the vehicle and watching the students.

“They’re your kids. How would you want your kids to be treated?” she added.

As for Corey Marshall, he has been in and out of prison for various crimes. Graves said she still monitors his whereabouts for her own safety and peace of mind.

Editor’s Note: Proactive training for school bus drivers is scheduled to be a topic discussed during the STN EXPO Virtual conference, which will be held Jan. 25-27, 2021. 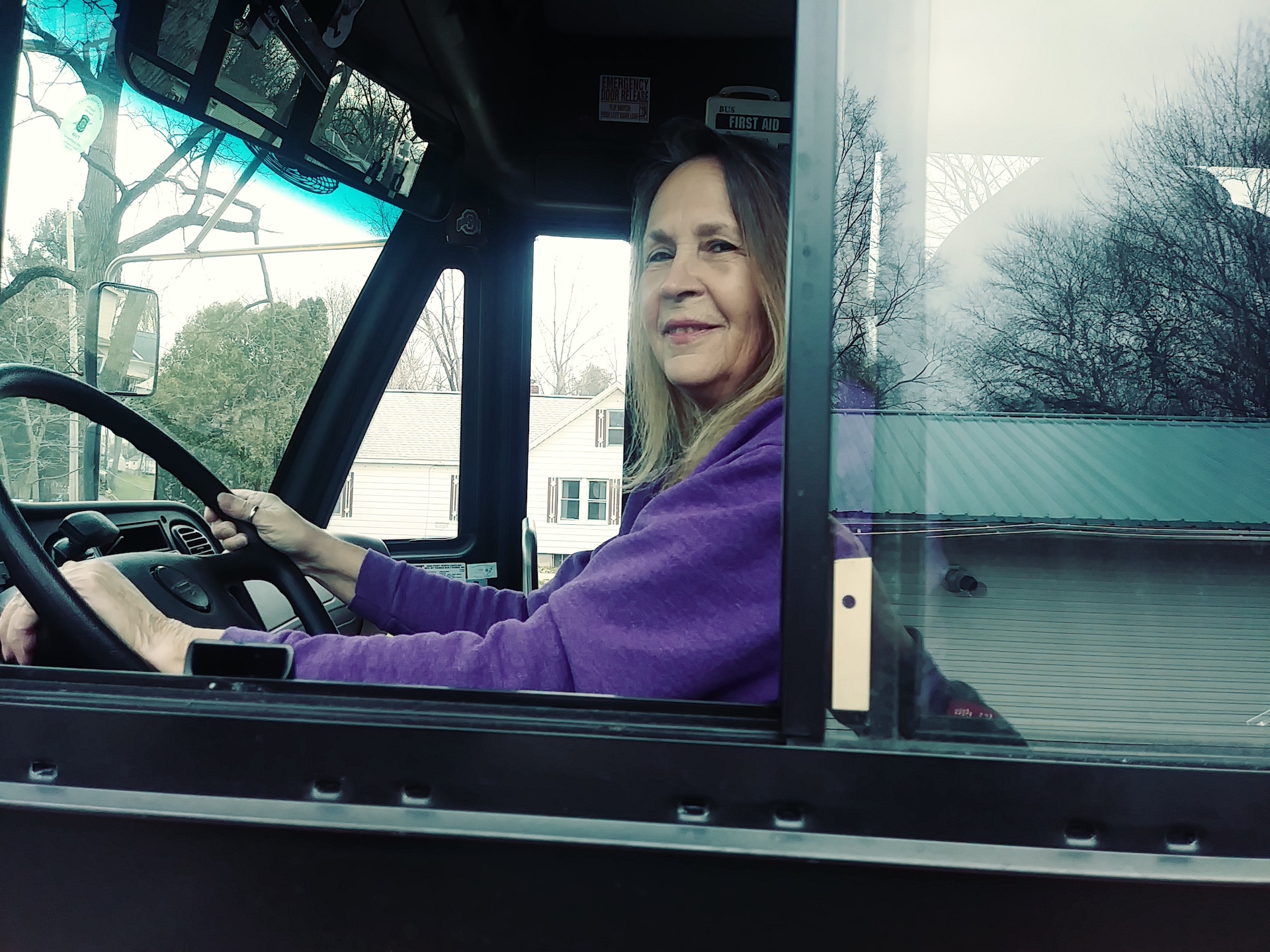