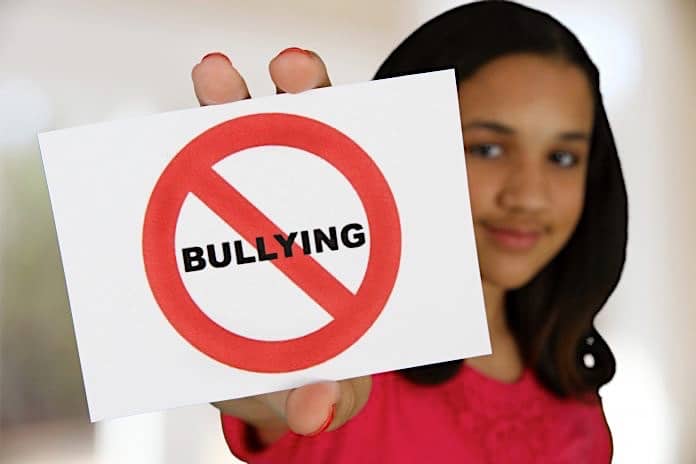 Bullying prevention is becoming more of a nationwide school district priority. According to the McGovern Medical School in Houston, bullying is defined as the “unwanted, aggressive behavior that presents in an engagement with another individual or individuals that involves a real or perceived power imbalance.” Bullying happens everywhere, and not just to children. It occurs in the workplace, schools, friend’s groups, online, and of course, on the school bus. It affects a student’s health, ability to learn and quality of life.

Some of us recall the chant, “Sticks and stones can break my bones, but words will never hurt me.” That ol’ chestnut is absolutely wrong. There are bruises that can’t be seen. Bullying can affect a child well into adulthood, and even cause psychological damage that can lead to problems with self-esteem, trusting others and anger issues.

Ken Martinez, director of transportation in Salt Lake City, Utah, said he believes that bullying is definitely increasing. “Back when I started, in 1990, if there was an issue on the bus, you could pull over and Johnny could walk home,” said Martinez. “Now, if a driver did that, you’d end up in a lawsuit. The kids know that and they know that their parents have their backs. Many of them have a no fear attitude that comes from a sense of entitlement.”

Martinez and his staff breathed a sigh of relief on the final day of school last year. There had been a special needs run with one student who would repeatedly threaten to beat up the bus driver. “For a while we had a female driver who was doing well with that student for a few months, but then that situation ended and we put a male driver on the route who was very good at talking with this student,” recalled Martinez. “Normally if there is an issue that continues, we can expel a student from the bus. But we can’t deny a special needs student transportation, so that became a very difficult challenge.”

Training drivers, and the entire school staff, changes each year for Salt Lake City. “It’s fluid,” said Martinez. “We modify it to the world we are living in. We teach our staff how to recognize signs of bullying, and to be able to make a difference in the student’s lives. Our special needs department came in and trained us in how to better address transporting their students at the beginning of [this] school year.”

As far as his drivers adapting to more bullying on the school bus in recent years, he admits that he believes his staff has adjusted to it. “It seems normal to them because they haven’t experienced what those of us who have been in the industry for a few decades have experienced,” he explained. “We remember the time when kids were held accountable at home and when there weren’t knives or guns brought to school. Now, it’s like the adults have to prove themselves, instead of the other way around like it used to be. There weren’t school resource officers (SRO) back then because we didn’t need them. We have SRO’s in our high school now.”

Mo Canady, the executive director of the National Association of School Resource Officers, commented on the particular issues that stand out today in terms of bullying. “Kids who are different in any way are subjected to bullying,” he remarked. “Is the transgender issue going to bring on bullying? Sure it is. But not by any stretch of the imagination is it the only one. Bullying is just as much of a problem now as it was years ago. I don’t think anything has changed that much, but it does become more complicated because there is cyberbullying. Kids used to be able to go home and get away from the bullies, but not anymore if it’s via social media.”

The role of school resource officers is often educating students on different issues and offering informal counselling. “We’re law enforcement officers, so a bullying issue from our standpoint and what we can do about it is a little bit complicated,” Canady said. “Officers know that the majority of issues that are classified as bullying don’t necessarily correlate to criminal activity. A lot of cases are social isolation and name calling and other taunts that could drift into harassment. Those are fine lines sometimes. Then we get into physical assaults and those are a whole different matter.

“Getting our hands around this issue as a society, not just as a school or a school bus issue, is maybe one of the biggest challenges we face with adolescents,” he added. “We’ve got kids committing suicide over this issue. When I was a kid on the bus, there was bullying, but now, social media has had a profound impact on the problem. They can’t get away from it, and it becomes very psychological; where they just have to know what someone is saying about them.”

Training and Understanding the Adolescent Mind:

“Our law enforcement training for school resources officers is constantly being updated,” said Canady, adding that the training is reviewed annually and may be subject to a massive overhaul if needed. The past year was one of those years, where the basic course was updated, and the advanced management course is in the process of being updated. Recently, they’ve added subjects like adolescent brain development.

“It seems that the further research goes into this, they’ve discovered that adolescent brain development is now extending, for some individuals, to age 25. It’s no wonder then, when we ship kids off to college at 18, that their frontal lobe isn’t completely ready for it,” Canady explained. “Adolescents are thinking with their feelings. We want kids to behave like adults, and this isn’t an excuse, it’s a fact. They can’t. They don’t have the capacity. They process differently than an adult does. Knowing this is the first step in understanding why they respond the way they do.

“It’s not that we shouldn’t discipline them, it’s that we need to accept that they don’t think like adults,” he continued. “What SRO’s or any adult should do to handle a situation is to de-escalate the problem, while remembering that these kids are thinking with their feelings, and not processing information the same way adults do. The last thing we want to do is haul a student off to jail during the school day.”

Amy Santandrea, director of pupil transportation for the Berne-Knox-Westerlo district near Albany, New York, said, “Kids can be so cruel. I think back to some of the situations that went on when I was in school, and it was definitely bullying. However, it was acceptable behavior back then,” she continued. “I can’t imagine the mental trauma the students go through and how that carries them through life. There is a neighboring district which had a student who was being bullied. This happened a few years ago, and the student committed suicide. I took a class with his bus driver and when that driver described the student and what was going on, it was heartbreaking, and it was something I’ll never forget.”

Santandrea added that if there is bullying in Berne-Knox-Westerlo, the first thing staff do is separate the parties involved and hear both sides of the story.“Unfortunately, some parents claim their child is being bullied, but they’re not in the true sense of the word according to NYSED guidelines,” she said. “We all work to make sure it’s a credible report. Once the students have been interviewed, we then begin to interview any witnesses to the interactions. It’s much easier if it’s on a school bus because we have the video and audio, which are both very clear. The school buildings have surveillance but only in the hallway, and there’s no audio. If it’s cyber bullying, our Albany County Sheriff’s Office School Resource Officer is immediately contacted and they work with our school administration on the situation.”

In an article from Campus Safety Magazine on how to stop school bus bullying, the importance of including transportation personnel when creating district policies regarding student behavior. School bus drivers should be consulted and trained with other staff. Most school bus drivers live in the district that they drive for and could be an invaluable resource when included in the process.

“Each year, schools involve teachers, administrators and someone from the community in their safety planning team, but they really need to have bus drivers and students on that team in an ongoing fashion,” said Ellen deLara, Ph.D., a family therapist and faculty member at Syracuse University’s School of Social Work. “If they don’t include the drivers and students, they’re missing the perspectives of a whole segment of the population.”

Editor’s Note: As reprinted in the October 2022 issue of School Transportation News.