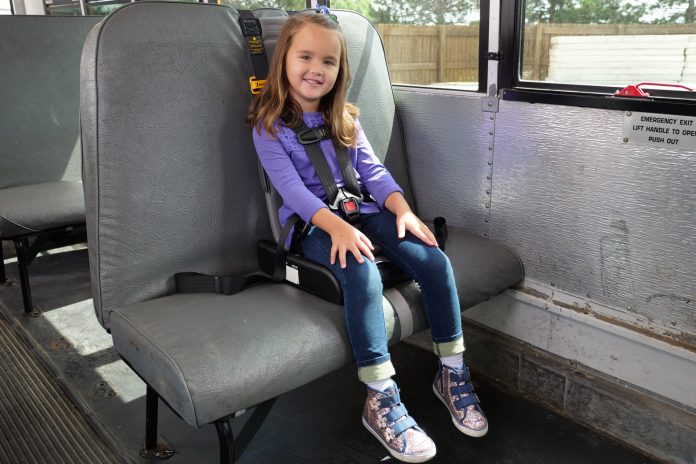 Transporting younger students is a complex issue, compounded by the fact that while pre-Kindergarten children should be seated in child safety restraint systems on school buses, there are no federal standardized training regulations for anyone involved in the transportation of pre-K children.

Indiana is the only state so far to require that all pre-Kindergarten students who ride school buses be secured in appropriate child safety restraint systems, though other states like Florida offer recommendations.

Those states as well as Head Start programs could be considered the model for pre-K transportation. The Head Start transportation regulation 45 CFR Part 1310.11 requires that each child be seated in a height- and weight-appropriate restraint system while the vehicle is in motion.

“In our school, the only pre-K we transport are special needs,” noted Tim Fosbrink, transportation supervisor of the Seymour Community Schools in Indiana. “I have buses with lifts and five-point harnesses, so I have no issues. A lot of districts that have pre-K programs had to install [SafeGuard] Star seats or the BESI seats in some of their buses to accommodate that law.”

Yet the issue of child restraint training is often left up to individual districts to figure out.

The National Highway Traffic Safety Administration (NHTSA) approves an eight-hour course that is considered the national standard for training, but relatively few transportation professionals have access to this seminar, as it is only currently taught at the TSD Conference, STN EXPO Indianapolis and STN EXPO Reno, all of which are presented by School Transportation News. State associations can also choose to offer the training to their members.

Still, there are few NHTSA-certified child passenger safety technician instructors (CPST-I) available to train others so that this specialized knowledge is widespread.

Training Developed to Meet a Need

School districts in the late 1980s began providing transportation for pre-K students with very few controls in place. In the mid-1990s, NHTSA performed initial testing on how to transport these younger children. The results were published in 1999, and the U.S. Department of Health and Human Services (HHS) published rulings at the same time for transportation of preschoolers who attend Head Start programs.

“Those were the first requirements for Head Start school bus transportation. They stated the students had to be on a ‘school bus-type vehicle,’ and a number of other rules, including that every student had to be in a child restraint,” recalled Charles Vits, a CPST-I and a retired market development manager for IMMI. “There were a number of different issues in the writing, including the weight of the child. It was intended to be a phased-in approach. By 2004, Head Start had a lot of reasons why they couldn’t meet those goals. [HHS] went back and did a re-write [on] a lot of the verbiage, the end result being that it allowed Head Start agencies to petition for a waiver if they didn’t have funds to supply the required restraints.”

Ultimately, Vits added, the Office of Head Start worked with NHTSA to rewrite the rulings to provide a role model for pre-k transportation.

“There were enough restraints on the market to accommodate every Head Start child, no matter their weight,” he said.

In the mid-1990s, NHTSA also researched and published a document on how to transport a pre-K student on a school bus. About the same time, the HHS provided requirements for transporting students to federal Head Start programs that serve low-income families. However, the requirements were quite broad, such as, “every child had to be secured in a child restraint.”

Does that mean a car seat? A seatbelt?

“In the late 1990s, NHTSA began this full certification program to standardize these technicians across the country, with materials from the National Safety Council and Safe Kids Worldwide,” Vits noted. “The 32-hour course for instructors is based on installing car seats, primarily in passenger vehicles. It’s what police officers or firefighters take to be able to run car seat checks for their communities. It also requires re-certification every two years.”

The materials for the course were put together by the National Safety Council and about 20 experts from different fields to standardize the child passenger safety technician materials. Safe Kids Worldwide is also a big proponent of the course. The organization is responsible for the entire certification program and maintaining the records. NHTSA has overall approval of the course.

Since retiring last year, Vits works with others in the industry to promote more uniform standards for training. “Here in Indiana, which is the only state that requires pre-K students being transported on a public school bus be restrained in an FMVSS 213-compliant child restraint, several entities came together that focused on child passenger safety,” he said. “The Riley Hospital for Children and the University of Indiana’s Injury Prevention Center, in addition to many advocates with expertise in this area, made pre-K safety happen.”

Denise Donaldson instructs alongside Vits on NHTSA’s eight-hour, hands-on course for school buses. She is also the editor and publisher of Safe Ride News, which offers a plethora of materials for school bus operations, such as a guide for using child safety restraint systems and wheelchairs in school buses.

“This handbook should be in every district,” Vits commented. “There are also a couple [of] great training videos on the site.”