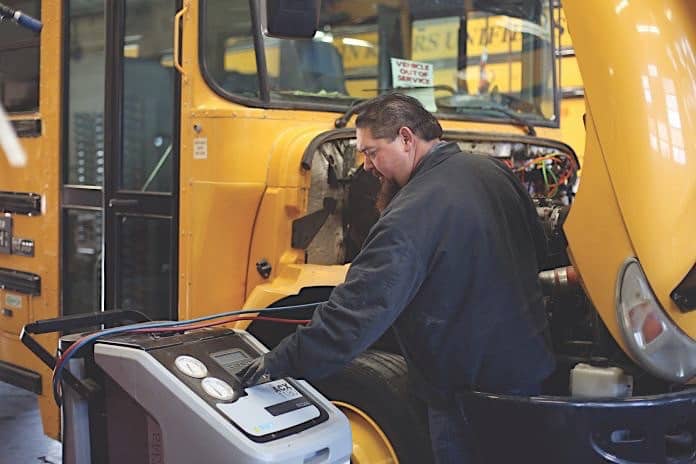 In contrast to the very noticeable yellow school bus, the technicians and inspectors who ensure said vehicles operate safely are often overlooked, but that does not lessen their importance.

Training and testing programs aim to improve the skills of the army of professionals working diligently behind the scenes to keep school buses working smoothly and safely every day.

“Every time you touch a school bus, make it safer than it was before,” Lloyd Gibbons advised school bus technicians and inspectors at the National Association for Pupil Transportation (NAPT) Summit in Columbus, Ohio last fall.

The statement was made during the America’s Best School Bus Inspector & Technician Skills and Training Competition, which Gibbons organized last year. That event and the seven-test ASE certification available for school bus maintenance professionals serve as examples of the dedication to excellence and safety among these behind-the-scenes student transporters.

The National Institute for Automotive Service Excellence produces the ASE test series for vehicle maintenance workers. The “S” Series for school bus certification was developed at the request of NAPT.

The “S” series is made up of seven tests that assess participants’ knowledge on body systems and special equipment, diesel engines, drive train, brakes, suspension and steering, electrical and electronic systems, and air conditioning systems and controls. Passing the first six tests and having two years of on-the-job experience results in certification as an ASE-Certified Master School Bus Technician. Certifications must be renewed every five years.

The tests are developed independently of the Institute. Forty percent of the test writers are Master School Bus Technicians, 30 percent are trainers from school bus manufacturers, and 30 percent are educators who teach school bus maintenance at colleges and community colleges across the country.

“We take the best of all three [categories],” said Walt Commans, who serves as the ASE consultant and education foundation manager for the western states. He told STN he got involved with the program because he considers it “the best thing going for the industry.

Commans said he has noticed through his work in the western U.S. that more and more districts are requiring their school bus technicians to have ASE certification, even if the state does not make it mandatory. Some districts even offer a stipend or a higher hourly wage if the technician holds ASE certificates.

Additionally, Commans provides state conferences with ‘mock’ tests including retired questions to use as part of technician competitions held there.

Combining both written and hands-on skills testing with a networking opportunity resulted in the America’s Best School Bus Inspector & Technician Skills and Training Competition, which was developed by Joe Scesny, Marshall Casey and Bill Tousley for NAPT in 2004. For the past four years, it has been held during the NAPT Summit every fall after originally being held at sponsor locations, such as Michelin and Federal Way Public Schools in Washington state.

The written test for technicians is provided by ASE. In the absence of such a test for inspectors, their testing is developed and updated by America’s Best organizers using criteria specified by the National Congress for School Transportation.

The competition expanded to Canada in the summer of 2015. Casey, also the retired South Carolina director of school bus maintenance, told STN at that time that new technology such as telematic integrations was having a significant effect on the testing, as Commons noticed with the ASE Certifications.

“Advancing technology has changed some of the components for which we provide training on as well as some of the diagnostic workstations for our competitors,” he said.

Scesny, a retired lead vehicle inspector for the New York State Department of Transportation, shared that the training and competition phases of America’s Best work well together.

“We do the training first and, if you’re paying good attention, you’re going to see that physically versus on a PowerPoint or a lecture,” he said. “We try to gear it toward that. We have an electrical supplier come in and they’ll demonstrate their meters and stuff like that and then the class goes out to the tables and you’ve got the actual thing there, that they just learned how to do.”

The gathering of school bus technicians and inspectors from around the country lends an interesting perspective to training and conversations taking place during the event, Scesny added. Attendees would often provide an inside look at situations being used as training examples because they were there. Even better were the conversations, networking and problem-solving happening among the attendees themselves.

“The key to this is the networking part,” Scesny declared, adding that troubleshooting, feedback, problem-solving and valuable conversations happen “when these guys get together and they start talking.”

A regular presenter at inspector training sessions, Scesny said he appreciated the valuable knowledge shared by attendees and competitors and even learned things himself, which he then incorporated back into his teaching.

“It’s not a spectator sport or event. The guys are out there working and doing testing. It doesn’t get the fanfare like a bus rodeo, you know what I’m saying?” He joked. “But the amount of things that people learn that were new, you could just hear them talk about it—and you know you’re going in the right direction.”

“The benefit is what you see they bring back,” he added. “We teach everybody everything we can through training sessions—we use the manufacturers who come in—and hopefully then they go back to their shop and share it, which I know a lot of them did because I get calls all the time.”

NAPT Executive Director Mike Martin confirmed that the competition will be held on October 27 and 28, during the association’s annual Conference and Trade Show.

The COVID-19 outbreak that brought the 2019-2020 school year to a jarring halt in districts across the nation in March and resulted in a...
Read more
Special Reports

Since the coronavirus took its grip, many school bus drivers have been getting paid, and are working to deliver meals as well as information...
Read more
Special Reports

How Districts Make the Best Choices When Purchasing Video Systems

It’s been said that the only constant is change, and that’s certainly true with school bus-based video cameras. As these systems become more commonplace,...
Read more
Special Reports

School buses are delivering broadband internet access in areas with limited or no internet access, to help students complete their school assignments while at...
Read more