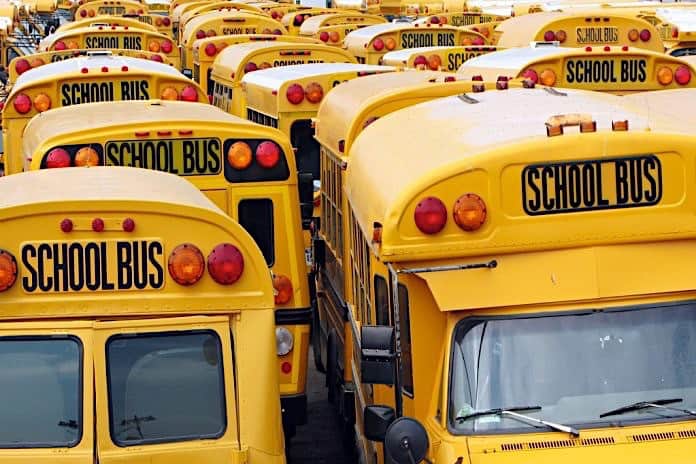 Four-year-old Vivian got her wish, to ride a school bus thanks to A Special Wish, an organization that grants wishes to children with life-threatening diseases. Vivian has an unrepaired, complex form of heart disease that is currently being treated and she might not make it to kindergarten. Her family reported that whenever Vivian saw a school bus, she wanted to be aboard; however, her doctors thought it is too risky due to her health. Perseverance prevailed and Vivian got to ride on a school bus with her family, going to Chuck E. Cheese afterwards, where they had the entire place to themselves.

New York City Mayor Bill de Blasio will expand a $42 million grant program to subsidize experienced school bus drivers to provide them with benefits eliminated by former mayor Michael Bloomberg. The elimination led to a month-long school bus strike. The grant program benefited 1,200 bus drivers and matrons last year. The expansion will not require city council approval, using $15 million in unused funds from the program, and additional city money if necessary. The administration hopes the state legislature will pass a law guaranteeing benefits for school bus drivers, though the push has failed to get traction in the state capital.

Meanwhile, New York City schools began its universal pre-K program this week for some 65,000 students. But only about 14,000 pre-K students with special needs and IEPs are transported via the yellow bus.

What ended with an Orange County, California, school bus erupting into flames began with an innocent check engine light. Soon the school bus driver noticed the vehicle was losing power. Then a student said that everyone aboard smelled smoke. The driver quickly pulled to the shoulder along the 5 Freeway in Irvine, California, evacuating the bus-full of students returning from a water polo match. “They went to the shoulder, and the back end of the bus was heavily covered in smoke and fire,” said the Orange County Fire Authority captain. No one was injured. The cause of the fire has not been determined, but authorities are investigating.

In an attempt to stem the number of bus drivers who don’t show up to work on a daily basis, the Palm Beach County, Florida, school district is offering a $175 bonus a month for perfect attendance. At least 10 percent of area school bus drivers are in dereliction of their duties each day, which impacts the way the district does business. The bonus puts drivers over the eligibility limit for HUD housing subsidies. “I did contact HUD in West Palm and at the county and I’m trying to work with them to help us solve a bigger and broader issue which is affordable housing,” said the district superintendent. The last time HUD readjusted their max gross income was in 2012, during the peak of the recession when values weren’t where they are today.

Meanwhile, First Student advertised in the Los Angeles area that it is offering a $2,500 sign-on bonus for school district customers in Pasadena and Baldwin Park.

And for the “you read it and saw it here first” file, Inside Edition featured a piece on school bus dragging and interviewed Kathleen Furneaux of the Pupil Transportation Safety Institute and Peter Lawrence of Fairport Central School District near Rochester, New York on the safety concern nationwide. Furneaux and Lawrence wrote an article earlier this year alerting the industry to the danger following a rash of incidents in New York. Then several high-profile dragging incidents occurred this Spring, after Furneaux and Lawrence were already booked to present on the topic at the STN EXPO.

Much of the discussion, debate and anxiety about returning students to in-person classes for the new school year have centered on the ability of...
Read more
Safety

As I have reported on before and I’m sure to report on again, there are still too many questions circling the pupil transportation industry,...
Read more