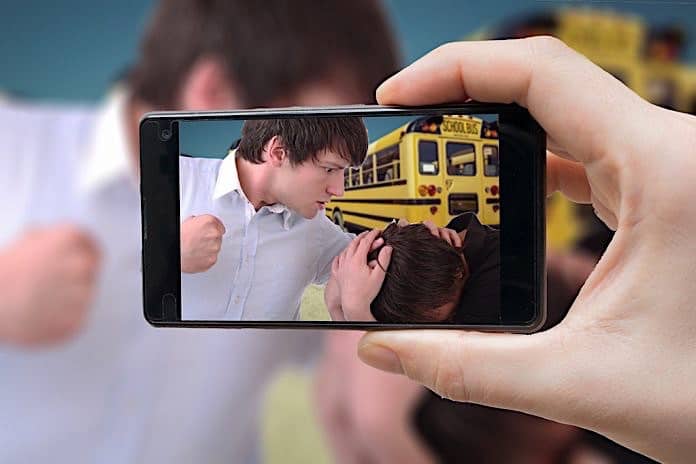 Officers with a North Carolina school district are investigating an incident involving multiple people forcing their way onto a school bus and beating up children on board indiscriminately.

According to one witness, the attack happened while the bus was dropping kids off.

“It looks like they’re at a riot fighting for their lives,” the witness said. “These are grown people beating on little kids for some he said-she said stuff.”

Students on the bus said the problems began last week when one of the kids made fun of a girl’s clothing.

According to the students, the girl vowed to get revenge. When she was being dropped off at her bus stop on the day in question, three adults allegedly forced their way onto the bus.

A West Mecklenburg official disputed the student’s claim of the number of adults involved, reporting that it was actually only two people who forced their way onto the bus and only one was an adult.

“They pushed the bus driver, got on the bus, got the bus quiet and said, ‘We want to know which one of you were talking about my cousin’s clothes,’” the official said.

When none of the children spoke up, one of the individuals allegedly instructed another to single out a child.

One of the students on the bus shot cellphone video of a violent attack on the bus. At one point, the video shows a person being manhandled from one side of the bus to the other and pummeled with punches.

Florida school bus driver, Jimmy Edwards, 55, stands accused of aggravated child abuse and neglect for allegedly hitting a student with a hammer, then kicking the child off the bus.

School bus monitor Pamela Bethea, 54, was also arrested, authorities charging her with failing to report child abuse. Authorities have yet to release the age of the student. Investigators with the Escambia County Sheriff’s Office said there is video of the incident.

Still in the Sunshine State: A Florida school district is investigating an altercation between a student and a school bus aide, the latter allegedly battering the student who was trying to get off the bus.

According to the police report, surveillance video from the bus showed the student getting up from his seat to get off the bus at his stop. When he attempted to pass, the school bus aide stood up and says to him, “I go first.”

The student kept walking, but the schools bus aide wrapped her arms around him from behind. Police said the video then shows the bus driver noticing the incident, and the aide backs off letting the student off the bus.

Once the child got off the bus, the aide grabbed a broom and started walking toward the student. The bus driver, again, interceded, grabbing the broom before anything happened.

The Green County Sheriff’s Office said deputies and New Glarus police responded to a report of a Wisconsin school bus that collided with a pile of crushed black top in the road.

Further investigation found that the morning sun caused a bus driver to crash into an object in the road. The bus was carrying 14 New Glarus School District students. No injuries were reported.

The sheriff’s office said 62-year-old William A. Campbell was driving when he collided with the pile of crushed black top because visibility was obscured by the bright morning sun’s positioning. The bus sustained minor front-end damage and was not equipped with airbags. The bus was driven from the scene.

The crushed black top had been dumped in the road in preparation for a driveway project.

The National Transportation Safety Board (NTSB) issued its preliminary report on the October school bus crash that resulted in the death of the bus...
Read more
Blogs

A television commercial running since March thanks the Amazon “heroes” among us, the warehouse workers, drivers and airplane crew who deliver the items we...
Read more
Safety

While electric vehicles are a growing trend nationwide in the pupil transportation industry, the National Transportation Safety Board cautions that little research has been...
Read more
Safety

A 16-year-old Winter Haven High School student in Florida is expected to recover after being hit by an oncoming vehicle while crossing the street...
Read more