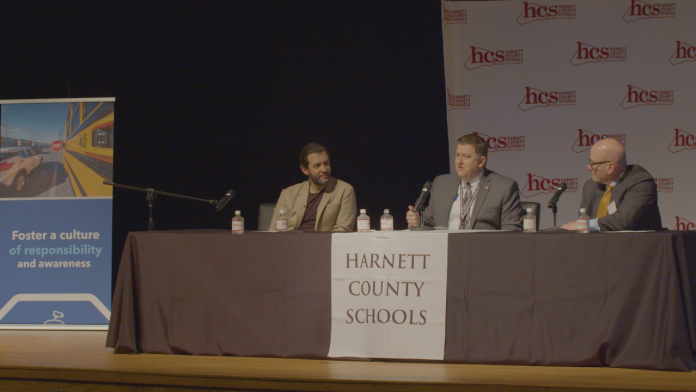 ERWIN, N.C. – School districts and school bus safety advocates from across the state of North Carolina convened at Triton High School last Friday to discuss a safety issue that continues to put local students at risk: the illegal passing of stopped school buses.

Each school day in North Carolina, more than 3,000 drivers ignore school bus stop-arms and blow past stopped school buses as children step on and off, according to data from NASDPTS. This school year, fully operational school bus fleets returned to roads for the first time in months. Many motorists were unprepared, and school bus safety laws were not front of mind resulting in numerous tragedies and close calls.

Dr. Fleming, Superintendent at Harnett County Schools, appeared in a panel discussion. He said: “Just last week, a truck failed to stop for a school bus in Davidson County as children were getting off. Luckily no one was badly injured, but close calls like these are a scary reminder that more needs to be done to keep kids safe as they travel to school and back.”

At the start of this school year, Harnett County Schools became the first in North Carolina to modernize its entire fleet with school bus safety technology from BusPatrol including stop-arm cameras, smart fleet management solutions, GPS, and 4G LTE connectivity. These solutions were made available at no cost to taxpayers or the schools through an innovative violator-funded program from BusPatrol.

“Harnett County Schools is leading the way in making roads safer for students,” said Jean Souliere, CEO and Founder at BusPatrol. “We are already seeing a real change in driver behavior here in Harnett County, with drivers learning to approach the big yellow bus with the same level of caution as if their own children were on board, or it was a police car! We urge all North Carolina school districts to take action against dangerous driving so that we can make roads safer for our kids.”

North Carolina DMV advises that when a school bus is stopped with its stop-arm deployed and red lights flashing, approaching vehicles from any direction must stop. The vehicle must remain stopped until the stop-arm is withdrawn, the red lights stop flashing, and the school bus begins moving. According to state law, the penalty for a first-time violation is $400.

About BusPatrol:
BusPatrol is a safety technology company with the mission of making the journey to and from school safer for children. BusPatrol’s safety programs change driver behavior and create a culture of awareness and responsibility around school buses. In addition, they provide accessibility for school districts and municipalities to modernize their entire school bus fleets by outfitting them with the latest stop-arm, route planning and route execution technology.