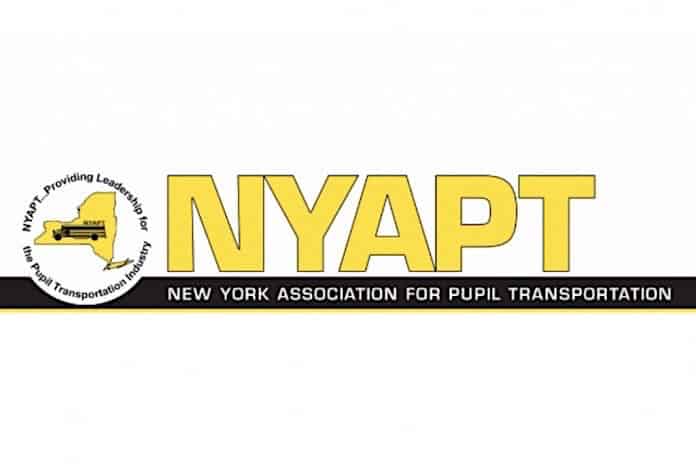 ALBANY, N.Y. — The New York Association for Pupil Transportation is urging the Assembly Transportation Committee to report out all five school bus safety bills that will be on the committee’s agenda on Tuesday, June 5.

“These bills have been under consideration for some time now and we are gratified that the Assembly is moving them forward at this time. Key among these are the Stop Arm Camera legislation and the Drug & Alcohol Testing legislation. These have been priorities of the school transportation community and we are pleased to see them advance like this,” noted Peter Mannella, Executive Director of the NYAPT.

Below is a summary of the five bills that the committee will address:

This legislation would allow cameras to be installed on school buses, to assist in enforcing the laws that prohibit passing school buses that are stopped with their red lights flashing. This problem occurs more than 50,000 times each day in New York and presents a real danger to children. Over a dozen other states have such legislation on their books and NYAPT believes it’s time for New York to do the same.

This legislation would address the need to upgrade and enhance the drug and alcohol testing that is conducted with school bus drivers. The bill would increase the number of drivers who are subjected to such testing, to ensure each driver is safe and ready to go on the roads to transport our children. The bill also increases the number of hours that must elapse before a driver can operate a school bus.

This bill would create a fund that could be used to create and promote awareness of school bus safety and particularly increase public understanding of the dangers of illegal passing. This bill will create many excellent opportunities to increase safety and deserves to be enacted by the legislature.

Individuals who hold commercial drivers licenses and operate large commercial vehicles such as tractor-trailers and motor coaches, have a special obligation to obey the laws of the road. This legislation recognizes that fact and would impose a greater penalty on such a motorist who illegally passes a stopped school bus. In fact, such instances have happened several times in New York and this is important legislation to enact.

This legislation deals with those individuals who violate the integrity of the school bus and the safety of the children more than one time. It would impose a 60-day (license) suspension on any motorist who is convicted two or more times of illegally passing a stopped school bus.

In summary, NYAPT believes that these are well-developed and important bills and urges the Assembly Transportation Committee members to vote to report each one out of the committee.

Such legislation is important, because it supports the efforts of the school bus community to keep all of our student riders, our children, safe at all times.