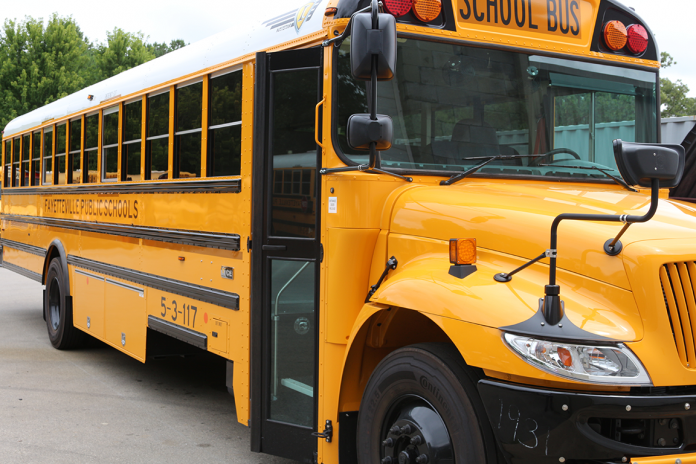 Michael McClure, director of transportation services at Fayetteville Public Schools, commented that the business of transporting students is a lot different than coaching them. School transportation professionals want to share their secrets to improve service everywhere, which is especially helpful when navigating COVID-19 guidance.

McClure is a public-school teacher by trade and started his 29-year-career in 1991 at the Gravette School District, located in the northwest corner of Arkansas. He taught social studies, health and physical education, and he coached various school sports.

In 1995, he started teaching and coaching at the Fort Smith School District, located about 100 miles to the south. It was there he had his first experience with student transportation. The transportation director at the time, Howard Pearson, approached McClure and offered him the opportunity to drive a school bus. McClure recalled that since he was already going to the football and basketball games, he decided to give driving a try, especially since McClure had a young family at the time and could use the extra money.

The transportation department trained him, and McClure got his commercial driver’s license shortly thereafter. He remained at Fort Smith for another six years before heading back up to the northwest part of the state.

He noted that he tries to offer that same driving incentive to coaches at Fayetteville that Pearson offered him. He said because coaches are already traveling to the various sporting events, they can help alleviate the ongoing driver shortage. He added that he currently has four coaches driving, and they are paid the same as substitute drivers, a rate of $14.25 an hour. But he added, he is looking for more coaches to help out.

“The good thing about transportation and the thing that I really like is … coaches aren’t going to share their secrets with you,” he explained. “They want to beat you, so they are not going to tell you what to do to give you an advantage over them. But in transportation, it’s not that way. We all work together and share every bit of information that we have with each other because we are all trying to accomplish the same goal, to get kids safely to and from school.”

He noted the open dialogue between districts and other directors is one of the reasons he enjoys pupil transportation. This year, he was president of the Northwest Arkansas Transportation Association, with directors usually meeting to share ideas. But the COVID-19 outbreak cut the meetings short.

Some of the biggest operational changes McClure has noticed throughout his 18-year career in pupil transportation is his district’s school bus specifications. He noted that Fayetteville is currently buying all new buses with air conditioning and lap/shoulder seatbelts installed.

He explained that out of the 55 routes the district runs daily, about 30 of them have air conditioning and 19 have lap/shoulder seatbelts. He noted that Fayetteville Public Schools is the first and only school district in the state to install seatbelts on its buses.

“I think everybody is [on the fence] until they research it a little bit,” he explained, when discussing the ongoing seatbelt conversations across the industry. “And you get the same old arguments. What if the kids get trapped? That’s really not a valid argument because the tension on the button, whether students are hanging upside down or whatever, the tensions are the same. If they can push the button seated normally, they can push it upside-down.”

He added that another concern he’s heard is students swinging the belts and hitting each other. However, he said that is not a legitimate argument either, as today’s lap/shoulder seatbelts are retractable into the seatback.

He explained that the Fayetteville implementation of seatbelts has been a positive experience because it’s another safety feature to add to the already safest means of getting students to and from school. However, he said the district is lacking a mandatory usage policy, and with a policy comes more challenges.

“What we do is encourage drivers to strongly encourage students,” McClure explained. “I would say the effectiveness to that is somewhat limited to younger [elementary] kids because they have never lived in a world where they didn’t have to buckle up. Older kids, for instance, junior high and high school kids, some will, but most won’t, just because it’s a hassle, and they don’t want to have to do it.”

He said his district did consider a usage policy but is struggling with the fact that only 19 of the buses currently have the safety restraints. The district balks at having to tell students who repeatedly don’t buckle up that they lost their bus-riding privilege.

“It’s probably not fair to require kids on 19 buses to do something that kids on other buses don’t have the opportunity to do. As we get more [buses], we will look into that,” he commented. “We know that riding the bus is a privilege, and it is in Arkansas. But the problem with that is, you are going to have to be willing to suspend students from riding the bus for not wearing their seatbelts, and that is a hard decision.”

Challenges for This School Year

The challenges this year are going to be unlike any other. McClure noted that he normally transports 40 to 50 students per route, and with the Centers for Disease Control and Prevention guidelines that were released in May, his ridership would reduce to 24 students if limited to one per seat, or 12 students if they could only be seated in every other row.

He said his district is looking at how to make physical distancing work, either by using a split schedule or by only transporting the students that have a serious need for transportation.

“But the good thing is, like I said, I have talked to other transportation directors in our area, and we kind of bounced ideas back and forth. Different scenarios. So that is good we have that support system for each other,” McClure said.

He noted another ongoing challenge of the student transportation industry is the constant struggle with staffing. But before the COVID-19, he was able to partner with the nearby University of Arkansas.

McClure said his district was working with a group of business majors from the university who identified innovative ways to recruit drivers. He noted, that while no college students drive for the district, the business students were able to provide actionable information and target certain groups of people to work as drivers.

He also indicated that COVID-19 could potentially help with the driver shortage.

“I think COVID-19 may help because the last time we had plenty of drivers was after the economic crash of 2008,” McClure explained. “And people were without jobs and thought they could drive a school bus because its somewhat steady, and there are benefits.”

He explained that the district has already seen more applications, but he remained unsure of what the department staffing needs will be for the fall. He added that one area the district struggles with is ensuring field trips and sporting events have enough drivers, as they usually fall right in the middle of the afternoon routes.

However, despite all the challenges and the uncertainties that lie ahead, McClure said his job is never boring and he loves the people in his department that he gets to work with every day.